Apt market on Saturday – this was not a visit to the market itself, but we had to walk through part it on the way to the Orange shop (a French mobile company, not a shop which specialises in citrus fruits).  I kept my focus and was not distracted by any of the brightly coloured flowers, leather goods, baskets or fruits – well done, me!

Then there was the first revisit to Mr Bricolage (a DIY store) to find that, as usual, we had mis-timed our arrival and they had just closed for their two-hour lunch break.  Some day we will get used to the French devotion to the midday meal!  After failing miserably to buy anything there, we carried on to the big supermarket in Apt, Le Clerc, and did some essential shopping, ie we bought wine.

On Sunday, we had Reillanne market, complete with a brief sojourn at the Café du Cours and a nice catch-up session with some of the English expats.  We met a few new faces, too, and I got to meet a very nice French lady who I had contacted via an expat website, and I managed to speak to her in French the whole time (Woohoo!) although her English is so good that when I was occasionally stuck for a word she helped me out.

The LSH recorded his first spectacular sunset from just outside our front door:

I’ve been watching out for any splashes of Autumn colour.  I’m not sure what to expect here – vibrant colours like in the US or just a general trend towards russet.  These were the first leaves that I could definitely say were colourful :

It’ll be interesting to watch the autumn progress here.

We had a couple of easy walks last week, but I struck out for the first DECENT walk yesterday.  One of our friends has been telling us that the Forêt Domaniale de Reillanne is a lovely place for a walk since we first met him, back in January.  Flurry and Aero will be living just at the edge of the Forêt, so I want to check it out on foot quite a bit before I start hacking through it.

Our friend was right – it is indeed a lovely place for a walk.  Cinnamon scampered along off leash, and Cookie trotted along beside me – we’ve discovered that she doesn’t pull at all if she’s wearing a body harness and walks have become quite pleasant.

After the first slightly uphill stretch, you arrive at the top of the hill and the ground falls away before you.

Looking northwards, I could see an old friend peering over the nearby hills :

I have a very soft spot for Mont Ventoux.  Although I referred to it initially as Mount Doom, it soon felt more like a kindly uncle, watching over us for the first 200km of Le Big Trek.  It’s nice to know that it’ll continue to watch over my adventures with Flurry and Aero for the next year.  I’m even toying with the idea of a mounted expedition to the top, although I know it’s godawful rough up there.  Despite what the locals say to gullible tourists, that’s not snow on top, it’s rock.  We’ll see…

Back to the walk in the Forêt Domaniale…
we turned left and continued along the edge of the ridge.  After a while we came to another viewing spot, this time looking over the wooded hill near Céreste where I rode a couple of times – once with Anne and once with the YD. 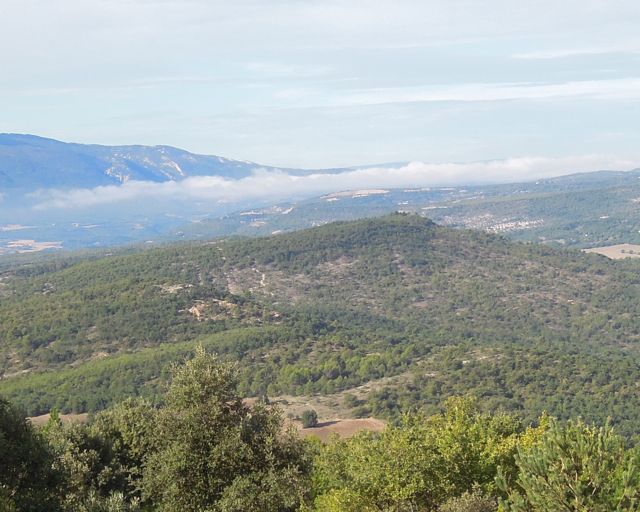 You can see the trail where we descended, it’s a little to the left of the middle of the picture and looks almost vertical.  It was damn steep, but it gave us the confidence that the horses understood that they needed to take their time in this sort of terrain and that they wouldn’t launch themselves down on top of us if we were on foot.

I had decided that I wanted to walk 5km, so  my plan was to walk 2.5km out and then turn around.  Of course, when I got to the 2.5km mark, there was an interesting trail off to the left which looked like it might bring me around in a loop.  It didn’t.  I ended up meandering around for a while, before picking up another trail which headed back to the trail along the top of the ridge.

Walk at Reillanne forest at EveryTrail

There are signs of human influence all over the place here, some of it just scattered heaps of stones, and some of it in good condition.

Eventually I got back to the carpark after a total of 5.8km, a nice walk, but I need to figure out a few circular routes now.

Finally, we had our first middle-of-the night thunderstorm.  We awoke to a flash and a boom just before 3am.  My first thought was of Cinnamon – she is afraid of pretty much everything loud – gunshots, fireworks, big trucks, slamming doors – but she is particularly terrified of thunderstorms.  The dogs are confined in the cubby under the stairs overnight, with a child-gate blocking the door, but if Cinny was really panicked, she might either try to burrow under the bits and pieces in the corner of the cubby, or she might try to get over, under or through the gate.

We lay still, listening for any noise from downstairs, and after a moment or two, there was a brief “Yip”, halfway between a bark and a yelp.  Then silence.  Then the faint jingle of a dog tag.  The LSH opened the door to investigate, to find two little terriers sitting there : “Dad, we’re scared!”

Cookie greeted him enthusiastically, but Cinnamon scuttled straight under the bed and refused to budge.  We spent the next half hour with Cookie curled up asleep between us on the bed, moaning grumpily if either of us moved, while lightning flashed overhead, rain drummed on the roof and thunder rolled and boomed around the valley.  Cinnamon, meanwhile, lay trembling and shivering under the bed, at times causing the bed to vibrate if her back came in contact with the frame.  It was a bit like being in a cheap motel in the US back in the 80s, except it didn’t cost 25cents!

Eventually the storm moved away, and I managed to entice Cinny from her bolthole.  She quickly recovered her composure – I think being with us helped her cope with the storm – and they both went back to their “bedroom.”

It all brought back memories of “Muuuuummmmm, Daaaaaaddddddd, I’m scared, can I sleep in your bed?”