The LSH and The Changing Face of China

It’s been pretty fraught in our household for the last couple of weeks, as the LSH prepared for his exhibition in Céreste, Clair et Sombre : La Chine en Evolution, Light and Dark : The Changing Face of China.

First he had to select photos.  After that, he had to process them.  Then he had to get the chosen photos printed.  He had to get little cardboard frame thingies made up for the prints available for sale. He had to print the prints available for sale.  He had to write up his artist’s statement (still waiting for him to get it translated… two days after it closed!)  He had to buy food and drink for the vernissage. He had to buy paper bags for all the prints he was going to sell.  He had to source protective plastic covers for these same prints (that was the hardest task, but he succeeded).  All this on top of negotiating a rather ironic new Project Management job – his former employers have just re-hired him for a short-term contract.

Finally, it was Friday and time to take over this :

and chuck the toolkit in as well… just in case.

Discover half the spotlights in the expo hall aren’t working.  Eek.  Attempt to replace lightbulbs.  Dash home to fetch stepladder in order to replace lightbulbs.  Hang the photos – wait a minute, we don’t have enough hangers.  Send the wife on a last minute dash to Manosque to source hangers (it wasn’t easy).  Spend hours pondering the layout of the images with his buddy.

Finally come to an agreement with aforementioned buddy… sigh…

Hang the photos.  Lay out the food and drink.

And wait for people to come.

The vernissage was a great success.  There were about forty people there, sipping wine or sparkling water, eating olives, saucisson or crisps… He even sold a couple of pictures (woohoo!)

He’s been manning the shop all week ever since and has had a steady trickle of visitors, pretty much what we expected.

Unfortunately the craziness of the tourist season has finished, so there are fewer people around, but everyone who came in was highly complimentary.

Here’s a little taste of his expo.

To the left of the entrance, we had a table with a stock of prints for sale, both from the expo and from his portfolio, and with a guestbook.  Lots of people signed it and said nice things!

His artist’s statement was there, too (in English!) :

This exhibition is the first in a series of photographic works examining how the internet is kicking globalisation into hyperdrive. Free instant access to information that transcends geopolitical boundaries is enabling political and social change at a rate never seen before.  Social media is giving rise to global virtual tribes that encompass many cultures.  In many ways man and machine seem to be on an inexorable path towards being indistinguishable from each other.

I am intrigued as to whether cultural identities will survive this incredible rate of change. Are we destined to become a homogeneous society or will politics, religion and resource shortages put a halt to globalisation ?

The series begins with la Chine en évolution, a literal look at the westernisation of China and the visual impact on their culture and identity. The photos were taken at night over a 6 day period in Nanjing where the artifacts of western culture and globalisation are every where to be seen on the main streets. Jeans, t-shirts and designer labels seek to at least visually blur cultural identities, but a unique Chinese style still shines through. Massive billboards depict western men and women as fashion icons. Chinese fast food battles with McDonalds and KFC as they continue their relentless spread. At last count there were over 4000 KFC outlets in China, with a new one opening every week.

Money and optimism seem to be everywhere. China is changing, and changing rapidly, and yet it is still unmistakably China.

…to the right of the entrance, there was the “checkout” with a few bits and pieces stashed behind it.

The gallery space is a very old building, with lovely vaulted ceilings and archways in the walls which frame the images beautifully. 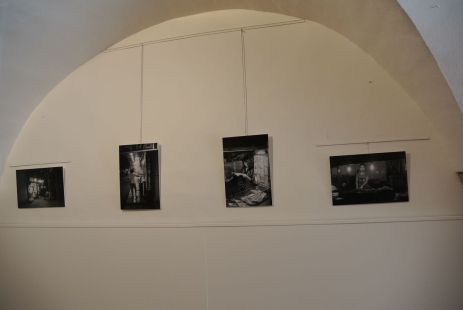 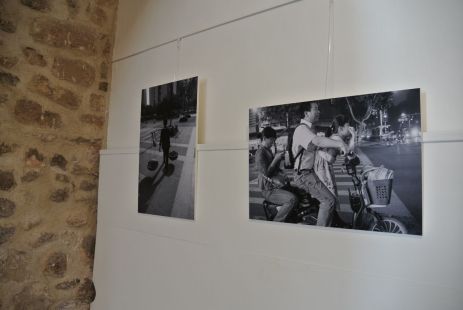 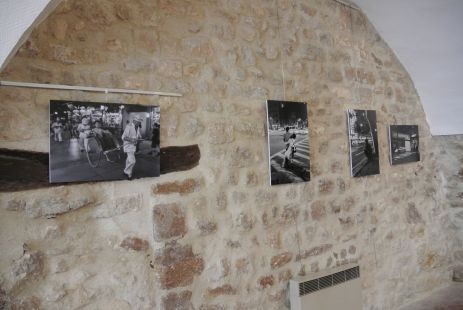 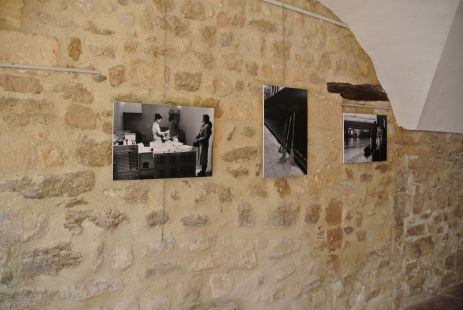 He also made use of two triangular ‘cages’ in the centre.

Finally, here are some of my favourite images from the Expo. 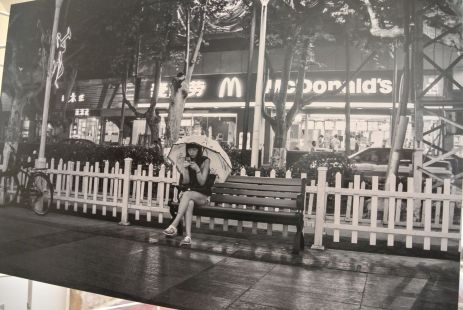 The back story : All of the photos for the exhibition were taken over the course of six nights in Nanjing, while the LSH was there for a business trip.  He was repeatedly struck by how the young, affluent China is adopting Western culture with gusto, while coexisting happily with what he considered ‘old China’ : the family on the motorbike, the fruitsellers on the street, the rickshaw pullers.

The Ceréste expo is finished, but La Chine en Evolution will move to SpeakEasy, in Forcalquier, in the near future.  If you’re planning to visit the region, watch out for it!  And if you haven’t already  done so, pop over to The Wide Angle Cafe, the LSH’s blog.  This post is a photo-essay about the Changing Face of China.

5 thoughts on “The LSH and The Changing Face of China”