“How would we cope with summer” was one of the things we (and a few of our friends) have been wondering about since we came here.  On the face of it, we coped very well.  We did not end up lolling around moaning “It’s tooooo hoooooot” when the thermometer hit 40C.  We continued to go out and about and do things, albeit at a slower pace (and frequently with a rest in the afternoon).  However, horse riding and dog walking became severely restricted.

The dogs could only be walked during the coolest part of the day, because of Cinnamon’s dodgy heart.  The coolest part of the day was before 8am and after 8pm.  Yeah, we managed it a few times, but mostly we just did a quick stroll up the road towards Villemus, sometimes leaving Cinny behind (much to her disgust).  The LSH, Ash and the YD took Cookie off to the WaterMeadows to play with the Pilates ball one morning at about nine.  The result was a dog with heatstroke and a lesson learned.

The horses also could only be exercised before 9am, for our benefit as much as theirs.  Once the flies get going, poor Aero pretty much looses his mind.  Such is the misery of a thin-skinned horse in the land of the horsefly!  Against my better judgement, I agreed to ride out one evening with a visiting friend who wasn’t free in the mornings.  She rode Flurry, who is less bothered by the flies than Aero.  Nonetheless, he swished and stomped his way along, while Aero swished and stomped and bunny-hopped and danced and shook and scattered sideways and shook his head….  not fun for him or me at all, and something I swore I would not do again, at least until I get one of these : 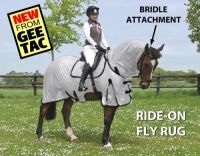 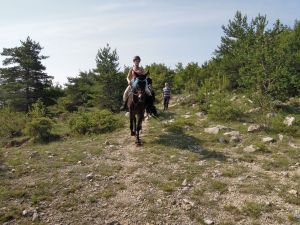 I follow a lot of horse blogs (click on the Bloglovin’ button on the right hand side of my page and you’ll see) and I’ve been following how people have worked and improved themselves and their horses over the summer.  Jen and CarrotTop and Roosa and Lauren I’m lookin’ at you guys in particular (although I do realise it was winter in CarrotTop’s case!!).  I’ve been inspired to get back in the arena and do some schooling.  THIS was the week it was going to happen – all our visitors have gone and the LSH is away on business.  My time (and Ole Jeepy) are mine and mine alone!

Sunday and Monday I was pretty shattered after a very brief visit to Cork.  I visited the horses both days and on Monday I said to Flurry “Tomorrow!”  And on Tuesday morning, we did a very productive forty minutes in the arena.  Lots of bendy stuff and moving sideways stuff.  He’s stiff to the right and inclined to rush when we leg-yield but we worked on it and ended up with a lovely, round, swinging trot.  We finished up at 10.30am and the flies were just getting started – Note to Self, finish by 10am! 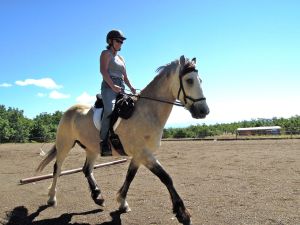 Wednesday was already complicated, I had an appointment in Apt in the morning but I still hoped I would do something with Flurry when I came back.  Then Alexandrine told me the vet was coming either late morning or early afternoon.

(Aside : A short while back, I realised that I’d completely forgotten about Flurry and Aero’s shots.  Oops. Aero’s was due back in March and Flurry’s was due in June.  They both have to be restarted.  We’ve been waiting for the vet to come out in this direction for about two weeks now. Of course he would decide to visit the day after I get my ass in gear again!)

So ok, I went to Apt, got back about 11am and the vet arrived at 2.00pm.  Shots were administered and the vet (who reminded me of John our Senior horse vet in Cork) trundled off again. I could have ridden if I had braved the flies, but I didn’t.

The farrier was coming on Thursday morning.  He’s always early, so I decided to ride Flurry after he was trimmed.  I planned on doing just a little gentle work in walk and a little trot (I prefer not to make a horse sweat up for a few days after its vaccinations).  Aero I would leave off for another couple of days, until I myself was fitter and better able to cope with his bounciness in the arena.

I woke up at 7am, feeling fine.  Sat up on the side of the bed and stood up – OWWWW!  WTF?  My back was killing me!  WHY?  I didn’t do anything strange!!  I hobbled around, took the dogs out, made my breakfast, fed the dogs etc, hoping it would loosen out.  It refused to ease out and got steadily worse instead.  Alexandrine took one look at me as I limped around the yard pathetically and suggested I call Moira the osteopath (another livery) and see if she could fit me in.  Why didn’t I think of that?  Moira could indeed fit me in and there followed an intensive, painful and exhausting session, followed by an afternoon of moving gingerly from couch to bed to chair, trying to get comfortable.

This morning my back is slightly improved but I have a thumping migraine instead (Moira did a lot of work on my head and neck).  I am not going to even contemplate riding until next week, when we will have a whole slew of different distractions.  More on that later…

22 thoughts on “A Valiant Effort”