I rode Flurry yesterday (just to make sure he’d behave for the LSH) and I’ve been walking both horses in hand and doing a little lunge each day, partly to get us all into a routine and partly to help them loosen out after the journey.

Flurry went barefoot, but Aero wore his Renegade boots.  There’s good news and bad news there – the good news is that his left front has spread a bit more, so it’s almost the same size as the right one, but the bad news is that I now have two size 2 boots too many and one size 2W boot too few.  It’s time for some more online shopping, unfortunately.

The LSH brought his new Little Camera – it’s a Sony RX100, which he bought so he’d be able to satisfy his photographic urges on horseback.  The first test was whether Flurry would stand still….

Well of course he would!  This is the horse that loves to admire spectacular views!  Although it was very hazy today, so the views weren’t up to the usual standard, but he stood quietly anyway while the LHS took a few like this : 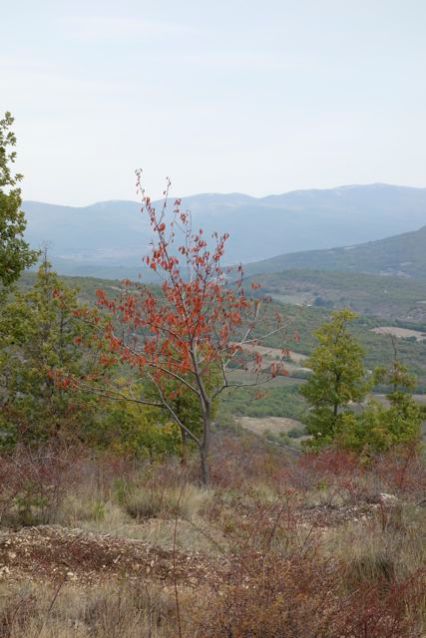 Aero doesn’t get this whole “scenery” thing, he was more interested in grazing.  I was happy to let him have a nibble though, it showed me how much more relaxed he is now.

The next test for the Sony RX100 was how would its panorama mode function on a moving horse :

Well, it functioned, but I don’t think the black bit on the Right hand side should be there!

I took my first official Through the Ears shot on Aero :

although I only had my iPhone, I can’t find the strap I used to use to tie the camera case onto the saddle and I didn’t want to squish my camera into the small pockets on my gilet. 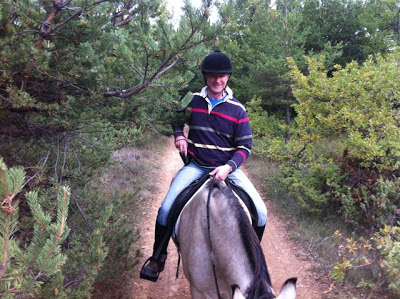 …pity I chopped Flurry’s head off though!

…all we need now is someone to take a photo of the two of us as we ride along holding hands, like this :

(shall I pass the barf bags?)

The hack was completely uneventful – a forty-five minute stroll through lavender fields and woods, with about five minutes on the road at the end.  Flurry sweated up a lot – it was 20C, hotter than we experienced all summer in Cork, I think!  I will have to get the clippers out and give him a very light clip, he’ll have plenty of time to grow more hair between now and January/February when the cold weather usually hits.

The local horse people collect stale baguettes to give to their horses as treats.  Flurry remembers this well from last year and was delighted to see a demi-baguette heading his way.  He kindly showed Aero what to do with it.

Aero thought it was a great idea!

He loved it, and didn’t pull any faces like Flurry did last year! 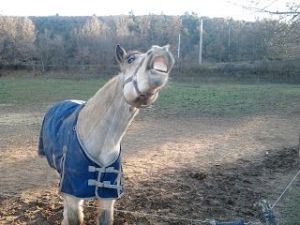 I asked the LSH to take a photo of me and both the Boyz – up to now, there haven’t been any in existence, and I want one for my Facebook page.  This is my favourite :

But this is probably the one I’ll use, where they are not trying to hide me :