Nature gave a magnificent display of pyrotechnics last night, with lightning flashing and thunder rolling from about 11pm right through to… well, it’s mid-morning now and it’s still going on.

The magnificence of it all began to pall somewhere around 1am, when we realised that any sort of sleep was unlikely and REM sleep would be impossible.

Somewhere around 2am I began to worry about Flurry and Aero, standing on a hill-top under a shelter with a corrugated iron roof.  What if they got a direct hit and were fried?  There would be two Crispy Critters waiting to meet me in the morning and my dreams of enjoying Provençe with my horses would be shattered.

A less dire scenario which played through my mind involved images of them galloping around in terror, breaking through the electric fence, which would of course be dead because surely the power would be out with all these bolts of lightning flying around.  After breaking through the fence, where would they go?  Not very far, maybe as far as the stables… oh no, there’s even more metal on the stable roof to attract lightning… another Crispy Critter outcome… or maybe they’d bolt down the road, they wouldn’t know where they were, they might run into a car…

These are the sort of things I worried about every time we had a big storm at home, but at least I could put a coat and wellies on over my pajamas and run out to check on the horses there.  I tried to reassure myself with logic – if they had taken fright and bolted, there was nothing I could do until daylight, anyway.  If they’d received a direct hit… well, again, there was nothing I could do.  Going up to check them was pointless until the morning, and anyway, putting myself at risk by standing on a hill-top in the middle of a thunderstorm was a pretty dumb idea.

I fell into a fitful sleep around 5am and woke with the daylight around eight.  I went up to check them, knowing that my middle-of-the-night imaginings were over-dramatic, but fully expecting to find Aero pacing anxiously up and down, soaked to the skin and shivering.  I was less concerned about Flurry – I tend to think of him as indestructible – but neither of them has ever been through such in intense, continuous electrical storm and I was quite certain they would both be a bit upset by it, and Aero would most likely be the worst of the pair.

I was met by a thoroughly soaked Flurry, who was standing outside the field shelter with a morose expression which would have put Eeyore to shame.

Meanwhile a slightly-wet, but warm and contented Aero was happily tucking into HIS hay in the shelter, making faces every time poor Flurry ventured under the roof.

I gave them both a scratch, informed Flurry that he won’t be clipped today and gave him a heap of hay all to himself.  Then I went home for brekkie, much relieved.

I’ve been concerned about how Cinnamon would cope with a serious thunderstorm here since before we moved.  Due to her heart murmur, we can’t give her sedatives, but during the first (brief) storm here ten days ago, she worked herself up into quite a state, panting, shaking and trying to dig a safe nest in the floor, with her little heart pounding all the time.  That time, she ended up underneath our bed, and once the storm moved on she calmed down pretty quickly.

This bout of thundery weather has been forecasted by meteofrance.com since the beginning of the week, and I decided to try dosing her with this stuff : 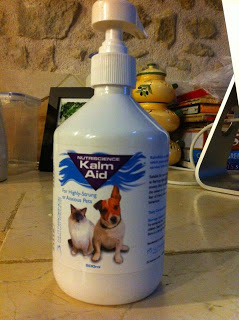 We’ve given it to the dogs for the ferry crossing the last two trips.  They were definitely more relaxed on the boat, especially the last time, but it’s hard to know if that was because they were getting used to the journey or if the Kalm Aid was helping.

I gave her two squirts of it in her feed every day this week – it’s one of those things that you can build up in their system.  Last night (and this morning) was a big test, and I have to say it has definitely made a difference.  She’s not happy, but she’s no longer so hysterically distressed that she can’t cope with her fear.  There’s no panting, no digging, no whimpering, just a little trembling and restlessness, and I’m no longer afraid she’ll give herself a heart attack. 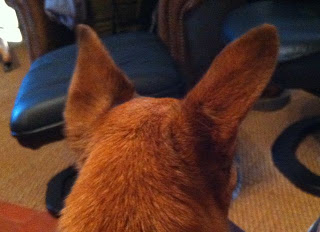 Thumbs up to Nutriscience and Kalm Aid.  I hope I can source some more here in France!