This week, we went to Apt – dear old slightly shabby Apt, home of one of the best Saturday markets in Provençe.

Our destination was a small restaurant called Le Chante de l’Heure, tucked away off the main pedestrian thoroughfare in Apt, the Rue St Pierre.  The name “Chant de l’Heure” has something to do with pancakes and Candlemas day (Feb 2nd) which is the traditional day for pancake eating in France.  Forget your Mardi Gras moveable feast, the French do it on Feb 2nd every year!

Anyway, the rather unprepossessing entrance does not prepare you for the cosy, homely interior.  Exposed stone walls, decked with an eclectic mix of bits and pieces all add to a very friendly, welcoming atmosphere, and the wood-burning stove glowing brightly in the corner made it nice and cosy on a cold Winter’s day.    We liked the fact that the dresser on the left is not just a showpiece – it stores glasses and crockery for the restaurant.  The waiter showed us to our seats and left us alone while we admired the room – I guess they’re used to it.  We were a bit surprised that there was only one other diner present – I would have thought that a Friday lunchtime would be busier than that.

Perhaps the prices put the canny local residents off, as it was a bit more expensive than what we’ve found recently.
There was no “Menu du Midi” and the Plat du Jour on offer was Souris d’Agneau – stewed lamb hocks – at a price of €12.00.  A far cry from the €14 we paid for five courses last week, but it’s a very different setting.  There’s no way I’d come into this place in muddy boots!
The LSH went for the Souris d’Agneau, but I wasn’t feeling very hungry, so I chose “Mont d’Or” described as a baked cheese, baked potato, salad and charcuterie.
I could feel my arteries clogging even as I looked at it – it was enormous!

Not only was it enormous, but it was delicious, and I had lots of fun dipping the different cold meats, potato and pieces of bread into the melted cheese.  Despite that, and despite help from the LSH, I just couldn’t finish it – there was enough there for two people with my appetite.
The LSH was meanwhile working his way through the Souris d’Agneau – one of his favourite dishes, since we were first introduced to it in our friend Anne’s house many years ago. 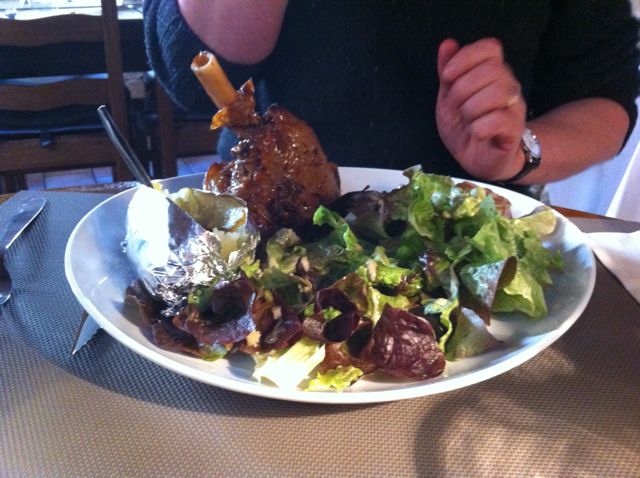 This was also served with baked potato and a salad.  Maybe salad was a strange choice to accompany a winter dish, but we both enjoyed it.
I couldn’t even contemplate dessert after my Mont d’Or, but there was Café Gourmand on the menu, and the LSH wasn’t going to turn that down.

It wasn’t the best Café Gourmand we’ve seen – clockwise, from the back right corner, there’s a slim chocolate mousse with vanilla ice cream, a macaron (which I nabbed – they’re light!), a creme brulée slathered with chantilly cream and the coffee itself.  The white square in the middle is a square of chocolate that came with my coffee, which I swapped for the macaron!
So, to the nitty-gritty – was it value for money?
Well, my plate of charcuterie, salad, potato and cheese was a pretty stiff €18.  I think if I went again, I would know that I’d like to share it with someone, which would make it great value.  The total cost of the meal was €40.50 – probably par for the course for lunch in a town restaurant, but there’s better value to be had out in the little village cafés if you’re prepared to forego some ambiance.
Star Rating (out of 5) :