Last Saturday, I had to collect the LSH from Marseille Airport.  It had snowed overnight, leaving the road over the Luberon covered with a layer of packed, frozen snow.  By the time I left, the snowplough hadn’t passed yet, and I crawled carefully along.  I was confident that by the time I got to Manosque, it would be slightly warmer, with less snow, as Manosque is usually a few degrees warmer than our side of the Luberon.  I was wrong.  Not only was Manosque covered in snow, but the Autoroute was also snow-covered and treacherous.  At least the snowploughs were in action there, clearing one lane on each carraigeway, so I trundled along in a long line of traffic, presumably with a snowplough at the head of the line.  Traffic in the opposite driection was desperately slow, even at a standstill in some places, so when I finally met up with the LSH in a completely unsnowy Marseille, we decided to go home via the Western end of the Luberon – a long detour, but we decided to have lunch along the way and do our TFIL meal a day late.
Just as we passed through Cavaillon, I spotted this.

All-you-can-eat Chinese, basically.
We can’t lose, we said, and in we went.
You don’t often see very overweight French people, but there were quite a few in this place – it’s obviously a popular choice for those with – eh – large appetites.
It’s a gigantic hall of a restaurant, with the buffets laid out in the middle.  There was one with bits and pieces you could ask the Wok chef to cook, one with starters, one with mains and one with desserts.  We stuck the the stuff that was already cooked, to keep it simple, and we hit the starter buffet – nems (spring rolls), chicken things, fried vegetable things, prawn things and some other seafood things (that I stayed away from), with an array of salads and sauces to accompany them. 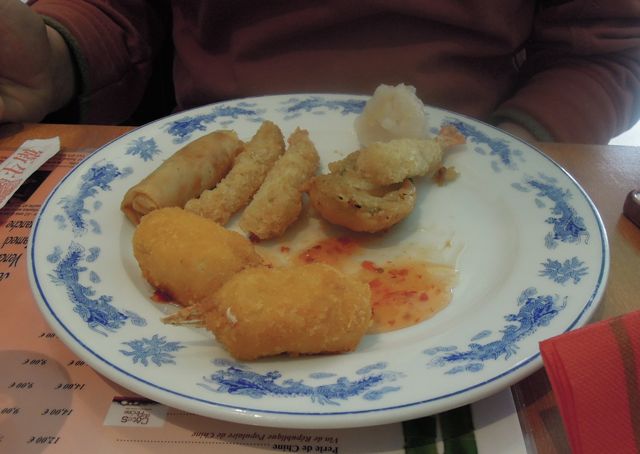 I could have just kept eating the starters until I exploded, but after one revisit, I moved on to the mains, in the interests of research, y’know.  There were Brochets à Poulet (chicken skewers), Thai Beef, Pork Caramel, Moules au sauce Chilli (chilli mussels, a weird combination, neither of us tried that) and Poulet au Gingembre (Ginger Chicken).  These were fine, but less awesome than the starters, with the exception of the Brochets à Poulet which were the best I’d ever had.  It’s possible that they were laced with MSG, but I reckoned that if it triggered a migraine, it would have been worth it.
By the way, if you really love spicy food, you’d be better off getting something cooked by the Wok Chef – the French don’t really do “Hot” and we find that Chinese restaurants here cater to the French palate, with Thai and Chilli dishes tasting a bit bland.

Desserts were a bit lacklustre by comparison with the first two courses; there was Dame Blanche, a soft meringue sort of thing, crème caramel and fresh fruit.

Value for money?  At €12.90 per head during the week, it’s brilliant value.  If there’s something you don’t like, you can just go back to the buffet and get something else.  They put the price up at the weekend, so it cost us €14.90 per head, with a pichet of wine bringing the total up to €32.50.  If you’re a big eater and find the portion sizes disappointing during your Provençal visit, it’s definitely worth calling in here.
Comfort wise, yeah, it’s a big barn of a place with no ambiance whatsoever.  We were seated beside the door and were chilled everytime someone came in or out, despite the electric heater placed nearby.  The toilets were surprisingly minimalist for such a large restaurant, too – just one cubicle each for Dames and Hommes.  I bet the queues are not too nice when it’s busy in the summer.
I wasn’t overly impressed with the service.  I know it was self service, but they brought wine to our table (when asked) and cleared plates.  However, they also left us hovering in the doorway looking bewildered for quite a while when we arrived.  My advice is to march in confidently and just grab a table if that happens.
Here’s the ratings.  I know it doesn’t look great with the one star for Service and two stars for Ambiance, but that’s just the kind of place it is.  I’d happily go back again.
Service : ✮
Food : ✮✮✮
Value : ✮✮✮✮✮
Ambiance : ✮✮