We arrived back at Soiano, a little muddy, a little smelly and a little wet.  Everybody changed out of their jodhs except me – I decided to show solidarity with Sharon, who didn’t have a change of clothes!  We headed towards the dining room and were shocked to walk into a hitherto-unused section and find it chock full of well-dressed Italian diners – to date, we and the “Soiano” family had been the only people eating there, and we all ate in the family room at the back.

Trying not to seem especially muddy, smelly or wet, we made our way to an empty table in the corner and settled ourselves in.  Following the lead of our new friends, we traipsed into the room at the back for the buffet and stopped in our tracks.

Picture a large dining table, which can seat fourteen comfortably or eighteen at a push.  Cover it with a checked tablecloth.  Now picture it laden with food.  Then, in your mind’s eye, fill in any gaps where you can still see the tablecloth with more food.  Finally, mentally push everything from right to left to make space for six different kinds of bread at the right-most end.  Does your imaginary table look anything like this? 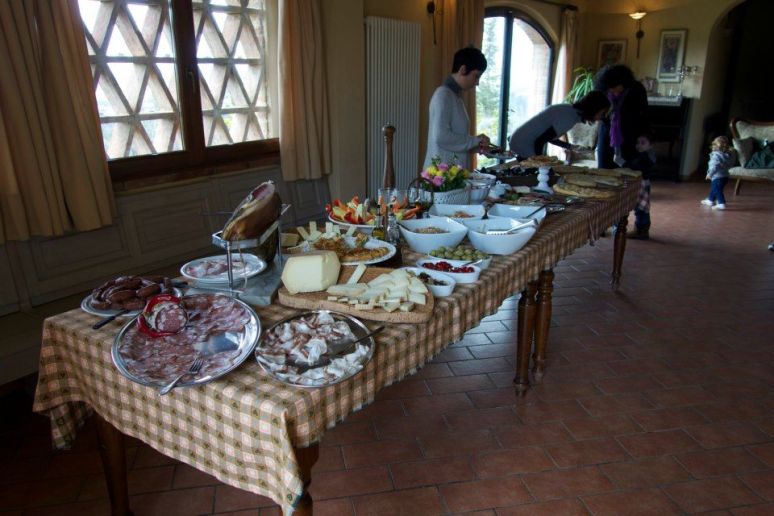 You know the Tom Lehrer song where he rattles off the periodic table of the elements?  (No?  Google it!)  The list of antipasti reminds me of that – there was smoked salmon, mussels and clams, calamari, baby octopus, braised artichokes, a kind of tripe-salad, spelt risotto, pimientos stuffed with anchovies, the biggest olives I’ve ever seen, three types of cheese, a whole parma ham, another kind of ham, salami, cacciatorini (a wild boar salami), spinach and ricotta pie, pickled wild mushrooms and the aforementioned breads, in flat, pizza form  – tomato, plain, garlic, salted, sesame seed and herb. 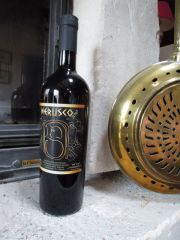 I dodged the fish dishes but enjoyed everything else, even the tripe (I didn’t realise what it was until I was halfway through it), washing it down with a glass or two of the excellent red wine which they make at Soiano, Nerusco.  After my third trip to the buffet table, someone said something about Antipasti.

“What?” I mumbled through a mouthful of braised artichokes “This is just the starter?”

So yeah, the pasta course came next.  Fresh Ravioli (giant-sized ones) stuffed with ricotta and herbs and with a meat sauce ladled over them.  That would have been “dinner” in our house any night on its own, but it was just the course in between Antipasto and the meat course.  I had greatly decreased my portion size by now, and after two Ravioli, I still had space in my tummy with a “Reserved for Meat Course” sign planted on it.

At some stage during the proceedings, I turned to Sharon and said “I don’t think we’ll be riding this afternoon.”

We had a choice of pork, layered with spinach and what seemed like omelette – or maybe a sheet of pasta? – all rolled around carrots and roasted, or little bits of roast very little lamb.  Or both.  Sure, I managed both.  After all, I’m only ever going to be in Tuscany for Easter lunch once in my life, right?

Dessert…. well, I more-or-less fell at that hurdle.  Dessert was a variety of little cakey, biscuity things.  I just had two.  And a glass of dessert wine to wash them down.

And finally coffee.  Chocolate was on offer and would have been nice with the coffee, but I’ve been migraine-free for a few weeks now and I sure as hell wasn’t going to chance it.

Poor Sharon had a ride going out at four, so the LSH dropped her back to La Fiaba and arrived back in time to wave goodbye to the Italian family as they left.  Would you believe it, the sky had cleared by now and the sun was shining, so we decided to try to walk off some of our lunch, and struck out towards a deserted village we could see on a nearby hilltop.

It was a nice walk, through woods and olive groves and then a grove of tall trees which made us think of the Dwarf King’s hall in the Mines of Moria – all vertical uprights, evenly spaced.

Finally we climbed the hill and arrived at the deserted village, Vignale.  There was never very much there – a church, a couple of houses and a couple of outlying farms – but the whole lot was abandoned during WWII, barring one or two of the farms.  The heart of the village, the church, the presbytery and the other houses are slowly crumbling away to nothing. 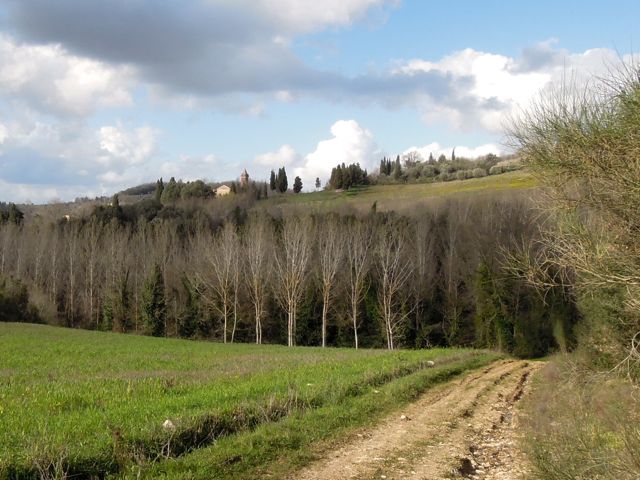 Part of the view 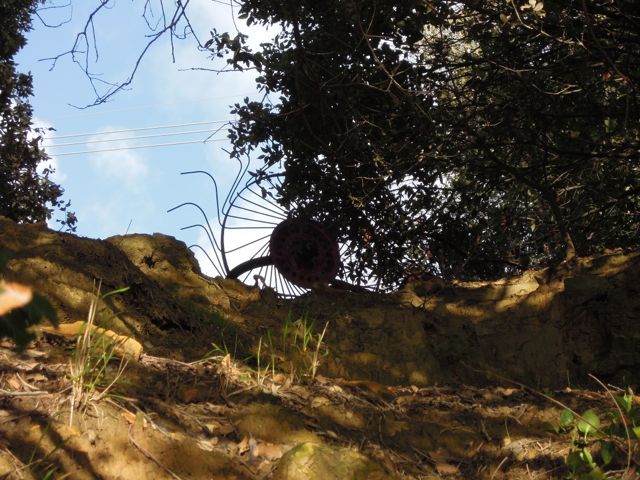 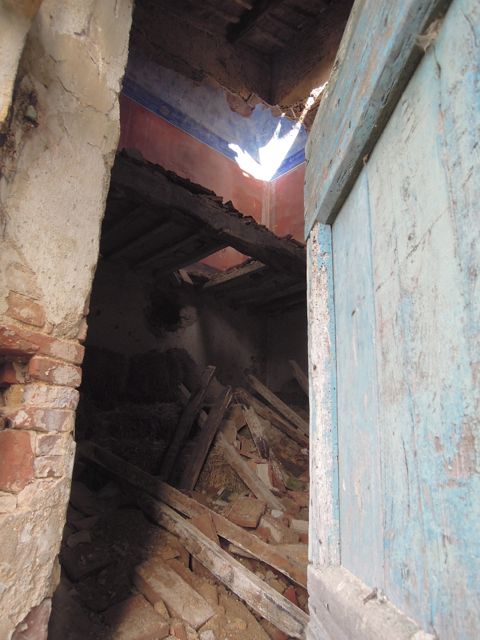 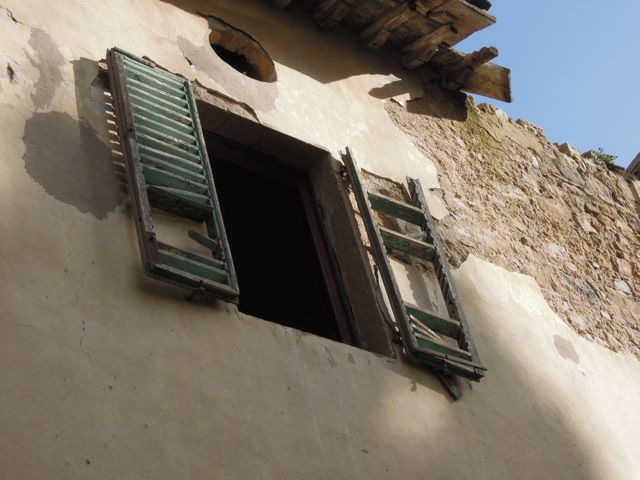 In the distance, we could see a lot of cranes and buildings on a hilltop.  It turns out that’s another abandoned village, but it’s been bought by German developers. 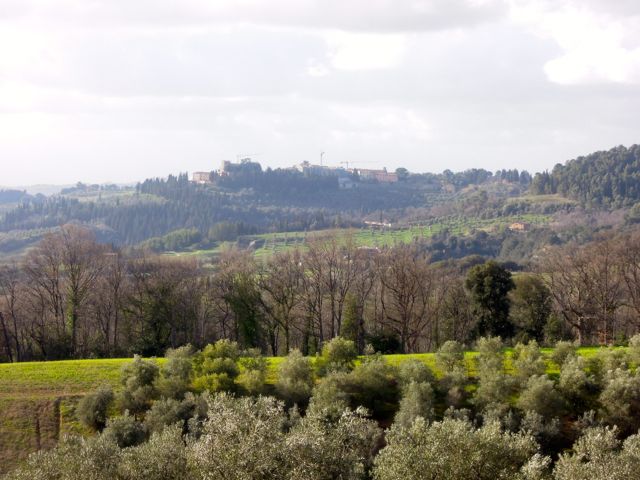 It’s probably a better future than a gradual decline into rubble.

We tried to take a shortcut on the way home.  Of course it didn’t work and we had to back-track.  I think we were walking for about two and a half hours all told – we definitely burned off some of that amazing lunch!