We spent a day on the far side of Mont Ventoux recently to catch up with the Bro and his wife Ant.  We ended up in Vaison-la-Romaine for no other reason than that I found a great deal on-line for a hotel there, Le Logis du Château.  It turned out we were the only guests in the hotel that night – well, it was off-season and pretty cold, enough to deter all but the most hardy tourists.

We ate out that night in a nearby hotel, La Fête en Provençe, simply because it was close, and we ended up having one of the best meals yet.

Because there were four of us, there’s loads of photos!  Here’s the starters :

They were all excellent, although I suspect the Croustillant was the winner.

Then we were on to our main courses.  Ant chose this fishy combo :

I went for Confit de Pintade, a slow cooked leg of guinea-fowl (my new favourite poultry) 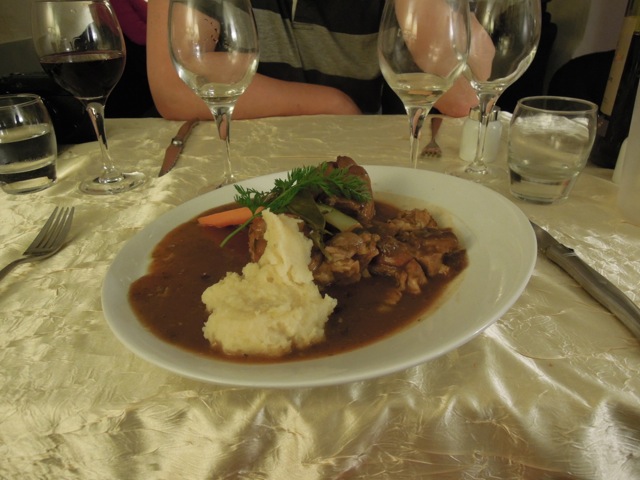 The LSH opted for the very fancy Boeuf Rossini.  It’s a filet mignon, served on a crispy, fried slice of bread – a crouton, with a piece of foie gras on top, garnished with black truffle.  To be honest, I don’t think I could have eaten more than half of that, it was just so rich.

Finally, the Bro had a steak, probably the plainest dish on the table!

What can I say except that, once again, it was all excellent.  The only query I have (and it’s just a query) is why they garnished everything with carrot greens – it just seemed a little odd.  Were they out of parsley?

And then, it was time for dessert.  The menu arrived

What’s that I see?  Rhubarb tart?  Well, that was me sorted, anyway.

The LSH went for his usual Café Gourmand, which was a little basic, to be honest.  Normally there are four mini desserts, these guys kinda cheated by putting a splodge of chantilly cream on the plate as the fourth dessert.  There was a macaroon, a mini coulant au chocolate (chocolate cake with a gooey inside) and a lemon cream sort of thing as well.  Plus coffee, of course.

The Bro had Tiramisu, and Ant opted for the less sweet option of a mix of goats cheeses. 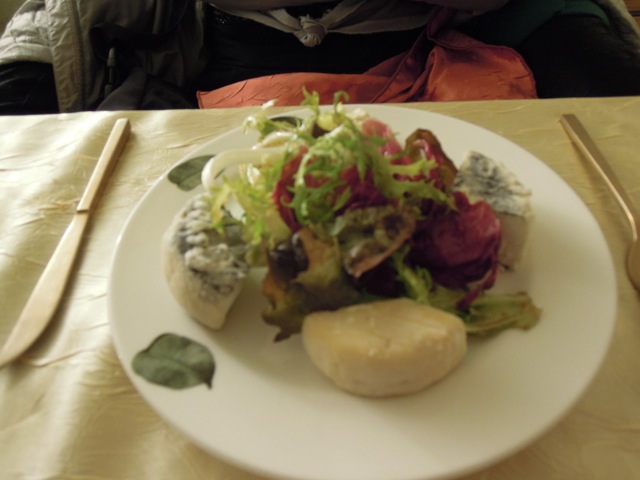 Finally, there was my choice :

Not only did it have the poshest name, but it tasted the best, too.  Yum.  (Have I mentioned I love rhubarb? No?)

Being dinner rather than lunch, it was a bit more expensive than we normally spend on TFIL, but La Fête en Provence also do a lunchtime menu for €18 – you can’t go wrong with food this good at that price!

We paid €50 per head, including tip and two bottles of wine.  You’ll eat cheaper in Vaison-La-Romaine but I doubt you’ll eat better.

We were discussing the ratings as we left.  I made the point that for a five star “Ambience” rating, the restaurant has to be sitting on the edge of a cliff looking out over the sea, or some mountain equivalent.  At that point, Ant reminded me that it was dark, so I we couldn’t actually see the ancient ruined château perched on the hill behind it.  Fair point.  Ok, this place gets our first five star Ambiance rating, but I got mean and took a star off for the stingy Café Gourmand and the weird carrot-greens garnish.