The Perils of Internet Shopping

Last week, I did something I’d never done before – I bid for something on e-bay.  It was a  Gaston Mercier Marathippo saddle, suitable for endurance and trekking, according to the Gaston Mercier website.  The price?  These saddles are €1350 new, so the minimum bid of €550 seemed liked reasonable value.  I googled them and they seemed to have some pretty good reviews, so why not the minimum bid, I thought – after all, I was unlikely to win the auction, right?

The tree extends out in front, thusly :

It extends out behind the saddle, too, presumably to give a greater contact area for weight distribution.

The pommel is well cut back so it won’t press on the withers. 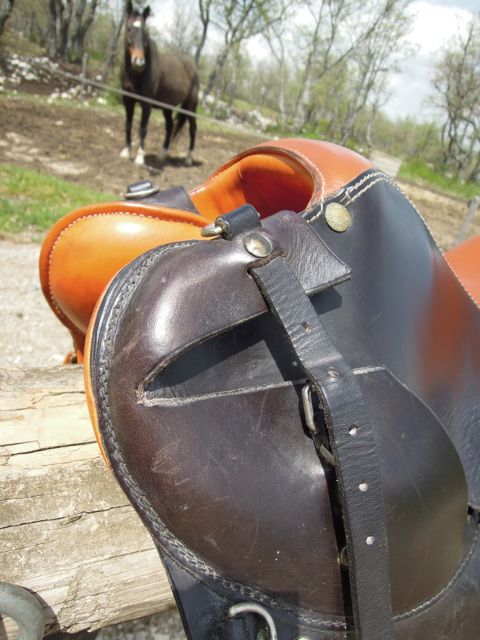 The flap is cut dead straight, with no rolls or padding, so it lies nice and flat, behind the shoulder, leaving loads of room for saddlebags (which is one of the reasons I need a new saddle).

Does is fit Aero?  The jury is still out on that one… it’s a bit “banana shaped” at the back, but I think I can fix that using a riser pad with variable shims in it.  Without riser pad (excuse the dirty horse!) : 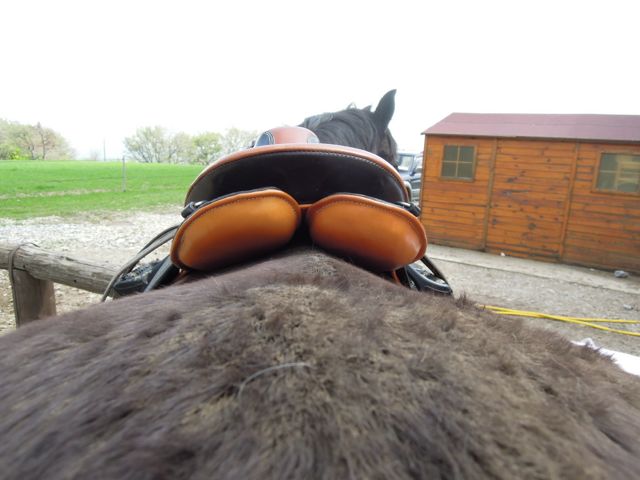 The other little niggle is whether it’s wide enough at the withers.  Aero is not a wide horse by any stretch of the imagination, but I’m not sure :

How did it feel for me?

Actually, not bad at all, despite its weirdness.  The seat is really nicely padded and I felt I was sitting nice and level, ie not tipping to the back and not pitched forward on my fork either. 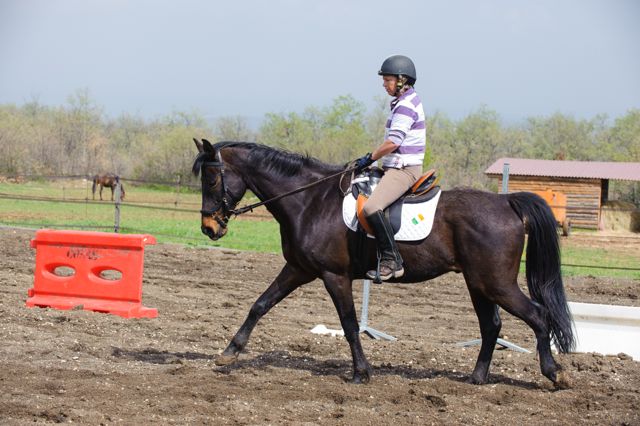 I did miss the knee-roll of the dressage saddle, mind you, and looking at the pictures, I’m wondering if I could place the saddle slightly more forward – I think that because of the funny extended tree, it’s designed to sit a little further forward than normal.

It rocks a little on him in trot, but then, so does every saddle he’s ever had… he is not an easy horse to fit.  Alexandrine had a look as well and had the same concerns as me, but the osteopath is coming on Monday, so she suggested that we ask her opinion, too.  Sounds like a plan.

But the weirdness continues…
when I got home, I looked more closely at the sticky-out bits at the front.  Hmm, I thought, why are these straps here?  I undid them, wiggled a few bits, and Hey Presto! 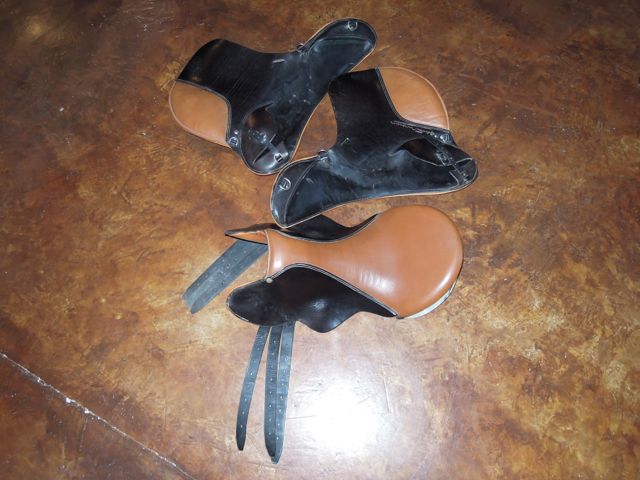 This saddle comes in instalments!

You can see its super-lightweight fibreglass tree :

and the quality of the leather in the panels : 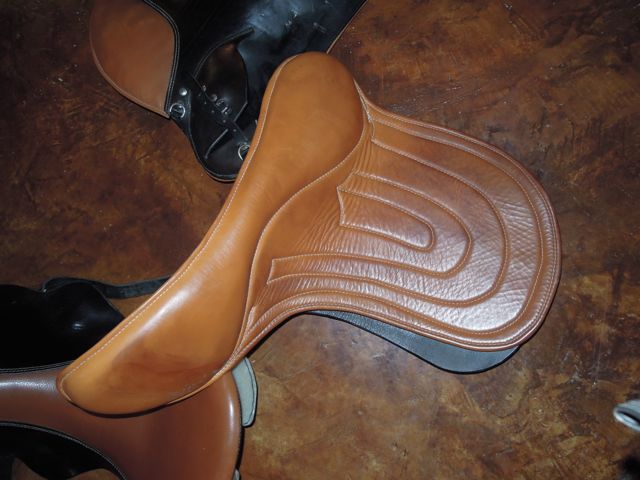 I like this saddle.  I hope I can make it work.  (And yes, I was able to reassemble it)

A couple of weeks ago, Kayti over at What Kayti did Next posted on Facebook about a few bits and pieces she was selling.  After some back & forth with her, I decided to splash out on a lightweight vented helmet.  My second ever Impulse Internet Purchase arrived today. This one came with a cute puppy card, though – thanks Kayti!

This one fits for sure!  (The hat, not the card) but again it feels a bit “different” – it sits on my head like a cycling helmet, not a riding helmet.  Here’s to not being a hot-head in the summer!

Finally, speaking of summer, the summer scourge has begun.  No, I’m not talking about visitors, I’m looking forward to them.  I’m talking about flies.  Poor Aero has two problems :

He had a couple of lumps on his belly yesterday.  Today he has them all over his body.  It’s time to break out the fly rug and face into the scourge of rubbed shoulders and slipped rugs.  It’s better than a lumpy horse… 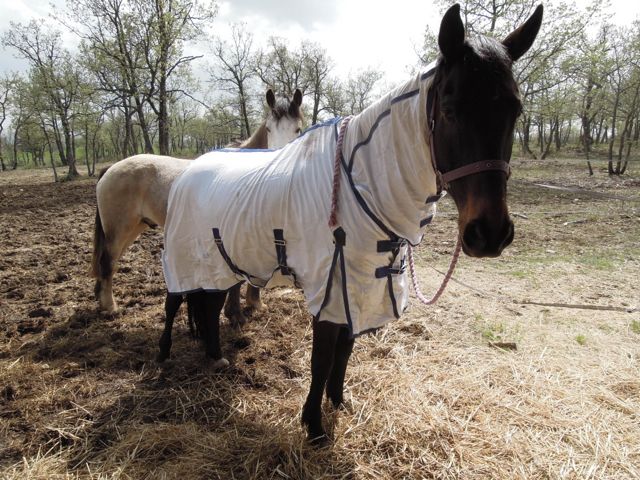 I thought Flurry was laughing at Aero first… 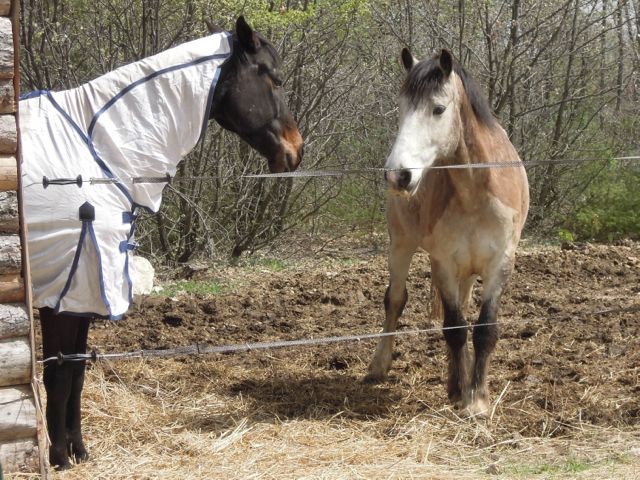 but then I realised that he was actually jealous as he stood there twitching flies off his body.

Hard luck, Flurry, you’re not getting one unless you develop an allergy too.