Reunion. It was Class.

I left Provençe early on Monday morning.  Unbeknownst to Ryanair, I craftily wrapped up the Provençal sunshine and hid it in my carry-on bag, stuffed right down at the bottom where no-one could see it.  On arrival at Dublin airport, I opened it up, shook it out and Voilá!  Ireland had a week of the best weather she’s seen for about ten years.

There is a whole generation of teenagers who never knew what it was to loll around on the grass with their friends, basking in the sunshine day after day, confident that the next day would consist of more aimless lolling or possibly even a trip to the beach.  Now they know, and they will forever feel cheated when the Irish Summer lets them down year after year.

Weather sorted, I picked up my rental car at Dublin airport.  Bring it back empty, the rental agent said.  Ok, I can do that, I agreed.

Off I went to Granny’s house to spend a few days with her.  Straight away, I noticed the absence of large birds of prey as I drove along.  We are so used to spotting buzzards and eagles around here that it seemed strange to glance at movement in the sky and see a mere rook or hoodie flapping along, instead of a large raptor floating menacingly high over the fields.

Granny’s house was truly idyllic in the glorious summer sunshine.  It’s in the countryside, looking out over a beautiful lake.  I got up early and went for a walk a couple of mornings. 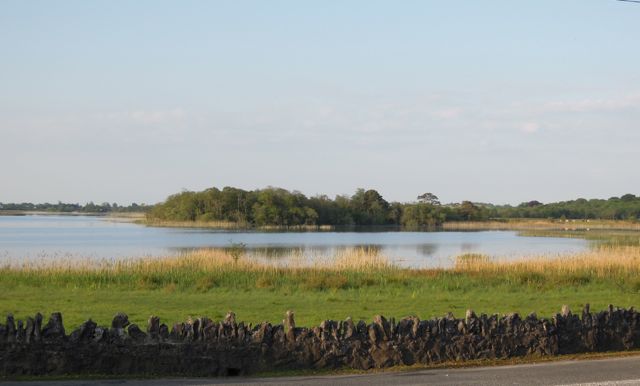 Despite the bright sunshine, I could see the signs of the late spring everywhere.

Bluebells just finishing up – some years I’ve seen these in flower at the end of April. 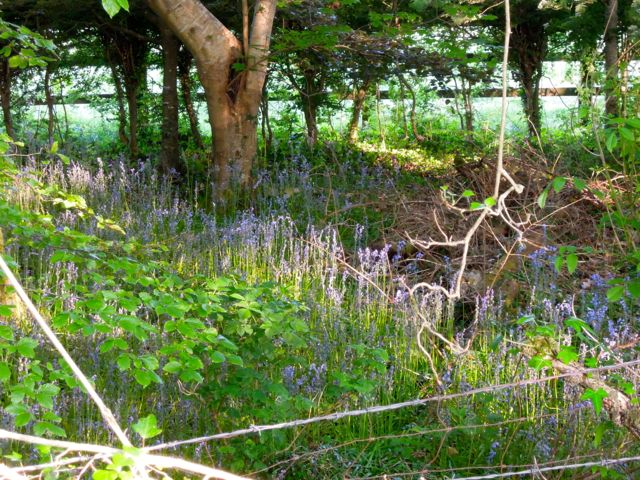 Whitethorn coming into bloom.  In June.  There’s a reason this is also known as Mayflower…

There was plenty of bird-life on the lake to make up for the missing raptors.  A pair of swans had fairly young cygnets, but they were very protective of them and slipped into the rushes to hide any time I passed by.  There were a pair of greylag geese with goslings, too, great crested grebes dancing in the middle of the lake, dabchicks laughing in the rushes, coots “pinking” in the distance, cormorants ducking and diving and the occasional bachelor swan flapping up and down the lake, the wind whistling through their feathers and their feet pattering comically along the water as they landed.

After five days, it was time to go back to Dublin for what was the original purpose of my trip – my college class reunion.  Thirty years.  Where, oh where did the time go?

Anyhow, first of all I had to drop the rental car back.  Empty, you will remember.  I started off with about four tenths of a tank. That should nearly get me there, I thought – after all, it had taken less than half a tank to drive down from Dublin.

Maybe it was downhill all the way from Dublin, or maybe the fuel gauge was calibrated badly, but by the time I got to Limerick, it had already fallen by one notch.  Three tenths of a tank left.  No worries, I thought, as I gaily passed the exit for Castletroy, where I knew there was a petrol station, I’ll stop at the next exit and fill up there.

I’ve been spoiled by French Autoroutes, of course.  There wasn’t another fuel station until I got to Nenagh, 40km away.  By then, I was down to the last notch and the orange warning light was flashing hysterically at me as I finally pulled into Esso.

Now, how much will I put in, I thought.  Ten litres?  Yeah, ten litres seemed good – a little over two gallons.  The car was tiny, surely it would get 45 to 50 mpg, and Dublin was less than 100 miles away.

Well, maybe the car’s fuel consumption wasn’t that good, or maybe I had underestimated the distance to Dublin but ten litres turned out to be not enough.  With that orange light flashing at me once again, I pulled into a petrol station on the outskirts of Dublin and put a stingy five euros worth of fuel into the car.  Hell, no way was I going to give away any free fuel to Europcar!  As I resumed my course for Dublin airport, I realised that I hadn’t even managed to turn off the orange light…. would I make it to the airport, some 23km away?

The answer was yes, but I have to admit to sweaty palms and a rapidly beating heart as I rounded the last corner and drove into the rental return depot.  No, it wasn’t worth the angst.  I should have just put 20 litres into the damn car at Nenagh and I would have enjoyed a stress-free journey.

I spent Saturday afternoon and a good bit of Sunday hanging around my Alma Mater, Trinity College Dublin.  It reminded me just how lucky I was to go to such a beautiful college, although I don’t remember seeing so many tourists around thirty years ago..

Croquet on the lawn…

The queue of tourists waiting to see the Book of Kells

The Campanile in Front Square. Someone put a bicycle on top of this long ago. 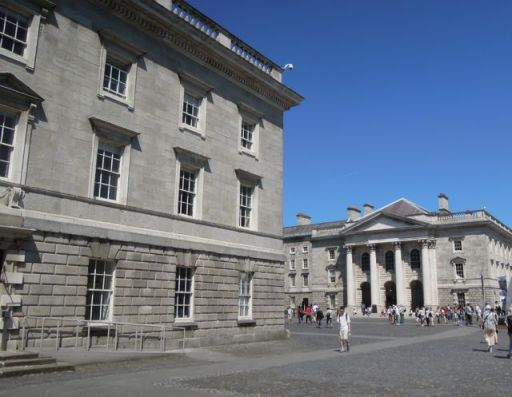 The view across Front Square from the steps of the 1937 Reading Room, where most of us did our studying.

I bought a couple of drinks and spent some time relaxing in front of The Pav, overlooking the College’s playing fields.  Looking at all the young people lying around, basking in the sunshine, it hit me like a ton of bricks – that was me, THIRTY YEARS AGO.  Suddenly, I feel old…

The class reunion itself was great.  Thirteen out of the original class of thirty turned up – nearly 50%, a good result after thirty years.  I hadn’t seen some of the guys since we graduated, but to be honest, it was like we parted company weeks rather than years before and we chatted and laughed our way through the evening.  Seven hours flew by in the blink of an eye, and myself and a few others left the hard-core revellers at 2 am.  Apparently they kept going until four.  Fair play, lads, fair play.  That’s good going for a bunch of Ould Geezers.

It was a great week, but it’s good to be home.  Now, if I could just shake off this head-cold that someone else had smuggled on board the first Ryanair flight…