The Hotel Aiguebelle is the very last eatery we’ve tried in Céreste.

It’s tucked away at the back of a car-park, just beside the tourist centre and the Gîte d’Etape (hostel).  It looks nice, with a cheery yellow facade, blue awning and tables and parasols laid out on a deck in front of it.  We were surprised it was so empty, though – the other restaurants were heaving and there were only four other people there besides us.  Perhaps because it’s set back from the main road a little and tourists don’t see it?  Or is it the food, we wondered…

We settled ourselves into a nice shady spot and mulled over the menu for a moment.  It looked interesting, but the entrée du jour (starter of the day) was melon and jambon cru, which appealed to me straight away – simple, light and cool!

The LSH opted for baked St Marcellin – a kind of cream cheese, breaded and baked. 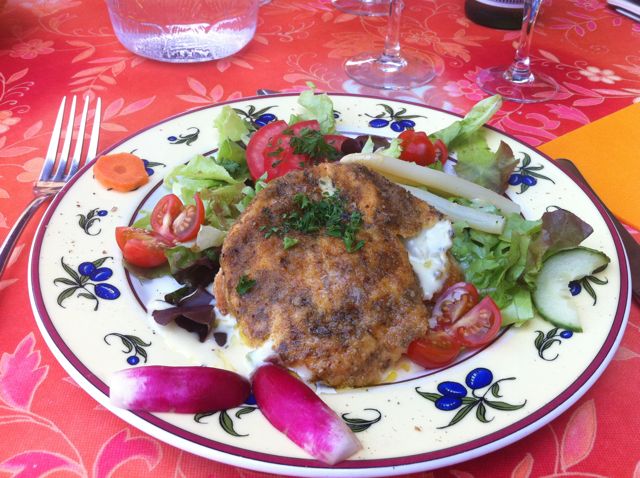 Both were good.  To be really nit-picky, I could say that some of the salad seemed to have come from a tin – the asparagus spears and the pickled red pepper, specifically – but they were good starters and boded well for the rest of the meal.

The LSH ordered Magret de Canard, duck breast, cooked à point, or medium.  It came with a really good Gratin Dauphinoise, a piperade and a roasted tomato laced with Herbes de Provence.  On the downside, the duck was over-cooked.  On the upside, the LSH HATES cooked tomatoes but he gingerly tried a piece of this one and declared it delicious! 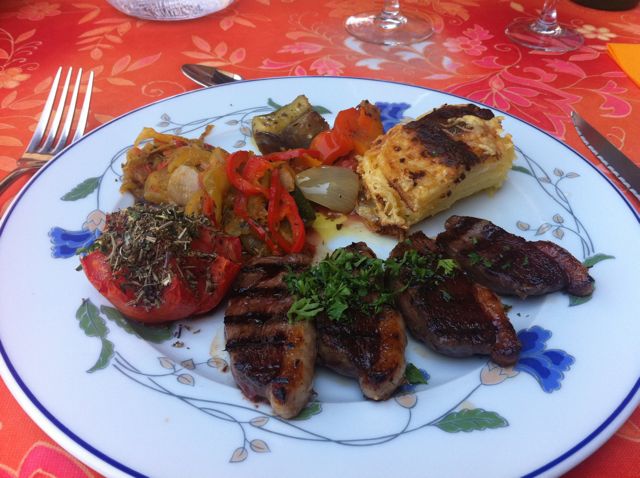 I was sticking to the Menu du Jour so I was a bit restricted in my choices for the main course.  I chose something from the Grillades section – steak!

It came with nice chips (out of a packet, but they all seem to do that here…), yet more salad and the same little roast tomato.  Again the meat was over-cooked.  I asked for it rare, I got it medium.  It tasted good though.

I asked for mayonnaise to go with the chips and was a little surprised when this was brought to the table :

Don’t get me wrong, I sure as hell don’t serve mayonnaise out of a crystal bowl at home, but Hotel Aiguebelle has a classy feel to it – they let themselves down badly with this.

Desserts were excellent.  I had faisselle (which is a kind of fromage frais) mixed with cream and served with summer fruits. 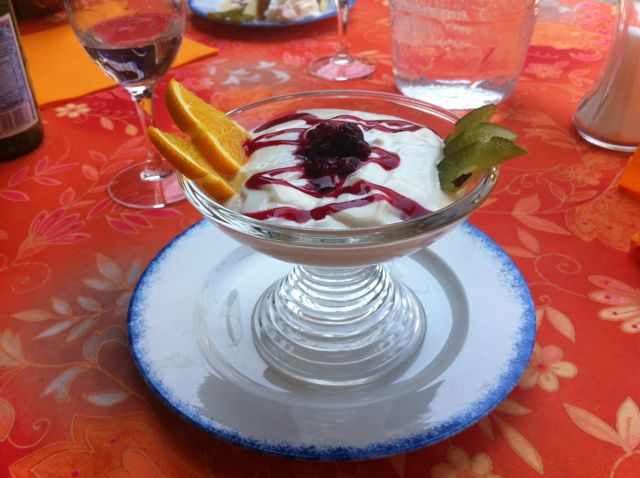 Two coffees completed the meal and we waddled back down the road, full and happy.

I don’t understand why it was so empty, when there were clearly so many hungry people in Céreste.  The food was good – not excellent, but good!

Service was fine, the waitress was very pleasant and there were no delays – unusual in peak season.

Value was quite good, too.  My menu du jour was €18 – not bad, but you will find cheaper!  The total came to €47, for two three course meals, a half bottle of wine and two coffees.

Service : ✮✮✮✮
Food : ✮✮✮ Am I being harsh? Meat not cooked as requested, a possibility of tinned veg?
Value : ✮✮✮✮
Ambiance : ✮✮✮ Not the best, unfortunate location at the back of a car-park