Anyway, they had a fun week, juggling and trapezing and hula-hooping and catching up with some of their Irish friends.

They got back here last Sunday, and said that some of the lads were coming to visit.  No problem, we assured them, they’re welcome to camp in the garden.

So the lads arrived in dribs and drabs, hitch-hiking, cycling and bussing their way across southern France, heading for Manosque, our nearest big town, as per YD’s instructions .

First to arrive was The Ginge, instantly identifiable as Irish by his red hair and fair skin.  He got a lift as far as Aix-en-Provence with fourteen other people in a van owned by two Mexicans.  No, I swear I’m not stereotyping.  That’s what happened.  I’m just glad the gendarmes didn’t pull them over for a safety check!  The Ginge only stayed one night, before hitching to Chamonix to stay with another friend, before carrying on to Geneva for his flight home.  We barely knew he was here.

Next was Mr Bump.  He had the luck to pick up a lift from Orange with a guy who took a one-hour detour to drop him to Manosque.  In a convertible.  Lucky b…..  But what they didn’t realise was that they literally drove right past our door en route to Manosque.  Oops.  Still, Mr Bump managed to hitch back to Reillanne easily enough.

Finally, Pedals arrived.  He’s been on the road since the start of June.  He bought a touring bike and some panniers.  Then he took the ferry to France and has been cycling southwards ever since, roughly following the route of the Chemin de St Jacques (Camino de Santiago).

He & Mr Bump arrived in Toulouse a week early and had some fun there before everyone else arrived.  Some of the fun involved Mr Bump renting a bike and falling off dramatically, almost ending up under a car (but that’s not why he’s called Mr Bump).

The Cork Juggling reps were camped near a couple of Canadians who were on their way back from the World Kendama Championships in Japan (I may have made that up but it sounds good).  These Canadians had big huge rucksacks that were FULL of Kendamas and they gave one each to their new Irish buddies.  What’s a Kendama?? I hear you cry….

It’s a Japanese wooden toy, consisting of a ball on a string tied onto a stick with three cups and a pointy end.  The game is to hop the ball into the cups in succession and finish up spearing the ball (which has a hole in it) with the pointy end of the stick.  Japanese kids grow up with these. It comes naturally to them.  Irish kids grow up with yo-yos.  They struggle with Kendama.

The Irish lads have been Kendama-ing away with commendable dedication ever since.  It’s like an obsession. 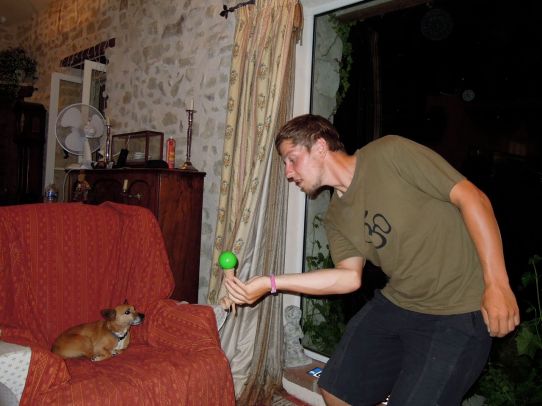 Anyway, Pedals and Mr Bump stayed a couple of nights.  I cannot imagine an easier pair of guests.  I don’t think any of the young men I knew in my twenties would have told my mother “I’ll cook dinner for you tomorrow.”  Come to think of it, I don’t think my mother would have allowed them!  Dinner was excellent, if a little fishy – crab with chilli and lime tossed in angel hair pasta, served with roasted vegetables (all by Mr Bump), salad (by the YD) followed by a dessert of tiramisu (by Pedals).

The YD and Ash were keen to show them the local sights, so they took ole Jeepy and headed for Colorado Provençal.  When they got there, they were a little alarmed to see a lot of steam coming from under the bonnet.  Uh-oh.  Long story short, I now know how to call for a tow-truck in French.

That evening, the three lads – Ash, Pedals and Mr Bump went for a short cycle while the YD was at work.  Yes, now you’re going to find out why he’s called Mr Bump.  On the way home (downhill), Pedals, who was in front, stopped.  Mr Bump decided to stop dramatically beside him and squeezed hard on the back brake, hoping for a sliding stop.  Only problem was, that particular bike has its brake levers on the wrong sides of the handlebars, and it turned out he was squeezing hard on the front brake.  The bike stopped so abruptly it did a handstand on its front wheel.  A combination of momentum and gravity carried Mr Bump over the handlebars and splattered him onto the road.  He came back with an impressive boo-boo on his knee, but he was sure that his wrist wasn’t broken…

…until next morning when, after a sleepless night, he decided he should really take it for an x-ray.  Spurning all offers of a lift to the hospital (see? aren’t they great guests?), he hitched to Apt and took himself off to Urgences.  I told him what to say.  I remember that from last year.  Je pense que le poignet est cassé I think the wrist is broken.

After two x-rays, they were fairly sure it wasn’t broken, just badly sprained, so they bandaged him up and sent him away again.  Meanwhile, Ash and Pedals had hitched to Apt as well (see?  really no trouble, these guys!) and were roaming around somewhere.

The LSH and I, out of necessity, resurrected The Heap and drove it to Apt to collect Jeepy, who unfortunately needed another night in MotorCar ICU.  We found Mr Bump wandering along the road wearing a nice new sling and picked up him, then we found Ash and Pedals in the phone shop and picked them up, too. 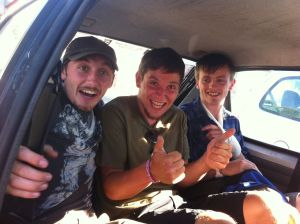 There were now three large young men in the back of The Heap.  It was sitting very heavily on the rear suspension, the back wheels were splayed alarmingly and the front of the car was tilting up like the nose of a speed boat, minus the speed part.  Would we make it home?

Thankfully, yes, we made it.  No-one had to get out and push, although it groaned a bit going up the hills.

The lads set about feeding themselves (great guests.  Have I said that already?) although Mr Bump wasn’t much use with his gammy hand.

After dinner, the Kendamas came out to play! 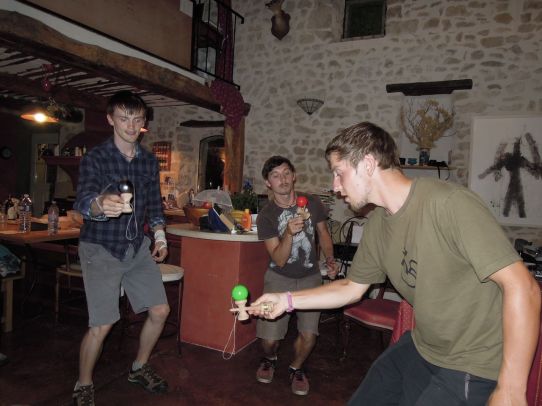 The LSH videoed a bit.  Seriously, these guys are not bad given that they’ve only been at this for a couple of weeks!

But this is how the professionals do it :

(What about that guy at 42second? OW)

Mr Bump and Pedals hitched their way to Marseille the next day.  Mr Bump is going on to Carcassonne and flying home from there and Pedals is coming back here for a couple of days.  He’s hoping to sell his touring bike and finish off the Camino de Santiago (the Spanish Part) on foot.

Anyone want to buy a bike?