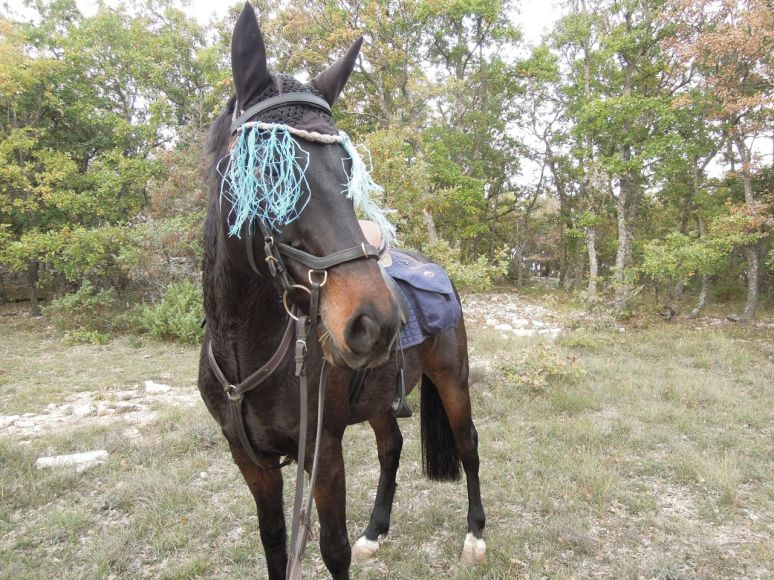 …although it’s all my fault, really.  I just posted about how much he’s come on in a year, didn’t I?

The good news is that his feet are still good.  I had a few moments of worry yesterday.  I was hacking with MC and we were bush-whacking – trying to make a new trail.  Aero was GREAT – a star, ploughing his way through the undergrowth like a little tractor.  I was thrilled with him, but when we came out onto the road again, I felt he wasn’t striding out as well as he has been.  No panic, I hopped off and put his boots on (they’re always in his saddlebags, just in case) and we carried on.  When we got home, I took the boots off and checked his feet.  Hmm, a little flap of loose frog… I peeled it off to find a nice little bruise underneath.

So I was slightly worried that he might be a bit sore today.  Sore? Ha!

We went out as a herd again – MC & Quieto, Alexandrine & Valentine her dressage starlet, the LSH & Flurry and me & Aero.  He was fine at the start.  We met up with MC’s daughter and the little grey Arab; Aero got a little excited but ’twas nothing.  We carried on.  And, for some reason, he got more and more wound up the further we went.  I was carrying a can of Aluspray in my saddlebags.  Anyone who’s familiar with it knows the rattling sound it makes when shaken.  Well, we jogged sideways through the woods with the can rattling every step of the way – so much so that it wound up the little Arab, too.  I handed it back to the LSH, thinking that it might be contributing to Aero’s state of mind.  We swapped places, so that Aero was at the back of the ride – both the Arab and Valentine are more than capable of kicking, so I felt it was safer to have Flurry as a buffer zone.

I had maybe five minutes of relatively peaceful riding.  Then we saw a deer (or rather, MC saw it, the horses heard it dashing away through the forest) and almost immediately turned down a new trail.  Aero got more and more tense – could he still hear the deer?  He danced most of the way along the stony trail, with me alternating between letting him run up Flurry’s bum and holding him back.  There were lots of low branches too and, every time I ducked, Aero tried to break into a canter.  Then we heard hounds baying off to our left and that was it, he just lost it completely.  Head-shaking, barging sideways past Flurry, just itching to explode.

The LSH and I bailed out, with apologies, and made our way home via a circuitous route.  After five minutes, Aero had calmed down enough that I could let him have the buckle end of the rein again, but ten minutes later, he got wound up again.  We could all hear something in the woods – deer? wild boar? mushroomers? hunters? who knows.

When we arrived back at the farm, he was still too tense to settle and graze and was sweated from ears to tail.

Ah well, I’m sure he’ll be fine next time.