It’s been a long day.  I got a lot done and now I’m even blogging about it.

The LSH was leaving for Paris early this morning.  I had to deliver him to his friend’s house at 7.30am and I planned to go riding afterwards, so that I would be home by 11 at the latest and could spend the rest of the day with Granny.

It was the first really cold morning; the grass was crisp with frost when I took the dogs out at 6.30 and the thermometer on the jeep registered -3C when we set off.  We drove into a brightening sky and witnessed the sun as it peeped over the shoulder of the Luberon, illuminating the town of Mane as we approached.  Beautiful.

By 8am, I was up on top of the hill with the horses.  It was already much warmer – it’s amazing how quickly the sun heats everything up at this time of the year.  It was Aero’s turn to work.  What will I do, I wondered.  In hand work or ridden work?  I opted for ridden work, with a lunging session beforehand to loosen him out – this helps both him and me.

He was great.  He felt like happy, slightly cheeky Aero from years gone by, enthusiastic about everything and with a real bounce to his step.  I just wish I was a better rider… but hey, that’s been discussed before.  I am what I am.

I was back home by 10.30, showered, breakfasted and ready to leave by 11.30.  The original plan was to go to Avignon and finally go inside the Palais du Papes but the dogs would have to wait in the car and it was now too warm to do that.  Inspiration struck : “Let’s go to La Fontaine de Vaucluse and Isle sur la Sorgue!”  I suggested.

I’d never been to La Fontaine de Vaucluse before.  Several people had said it’s lovely and that it’s a natural fountain.  Not at all sure what to expect, we went there first.  It’s only a short distance from Isle sur la Sorgue, which is in a level plain.  The first surprise was the massive, cave-riddled cliffs behind La Fontaine de Vaucluse.  Where did they spring up from?  I’d never noticed so much as a hill there before!

The second surprise was the river.  It’s the Sorgue, which goes on to flow through Isle sur la Sorgue and eventually, after some splitting up and meandering, flows into the Rhone.  I expected a little trickle.  After all, this is the source of the river.  All rivers start as a little trickle, don’t they? 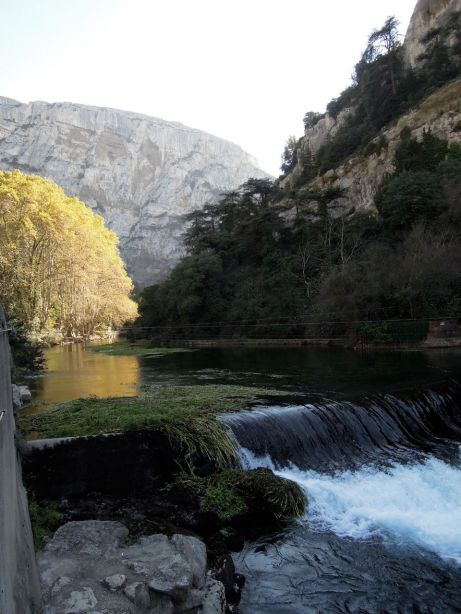 Not this one.  This one starts life as a fully fledged river. 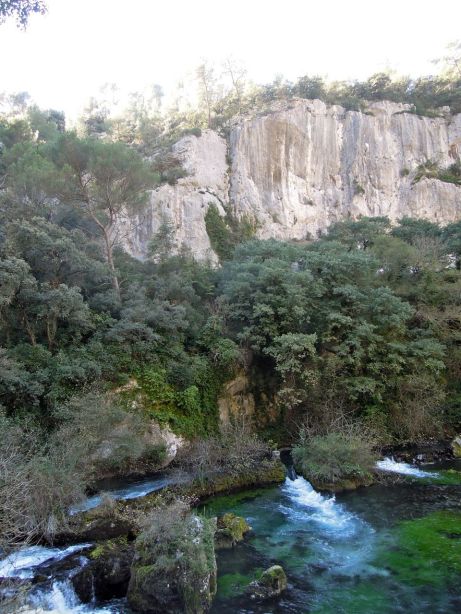 And it really is that beautiful, emerald green colour.  We walked quite a way alongside it, but I could see that Granny was tiring and lunch beckoned, so we turned around and went back to the village. 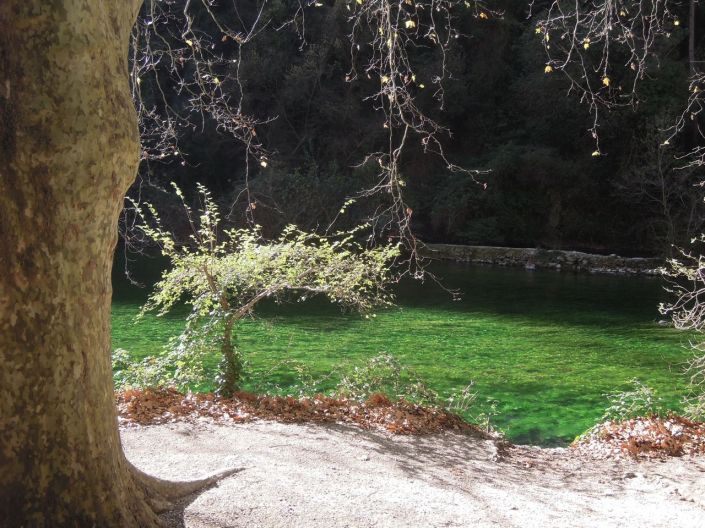 The third surprise was when I looked up the river Sorgue while we waited for our lunch.  This is what Wikipedia had to say :

The principal point of interest is the source of the Sorgue to the foot of a cliff 240 metres high: Its average flow is 22 m3 / second, the highest in France, and can attain 110 m3 after the snow melts. It wasn’t until 1985 that the mystery of its origin was partially revealed: in effect, the lowest point is at -308m depth attained by a robot belonging to the Spelunking Society of Fontaine de Vaucluse. The spring is the only exit point of a subterranean basin of 1200 km2 that collects the water from Mount Ventoux, the Vaucluse mountains and from the Lure mountain.

WOW!  It really does just appear out of the ground as a fully grown river!  And it really is a natural fountain!  And a 1200 km2 underground lake!  Wow!  And more – it’s the biggest spring in France and is reputed to be the 5th biggest spring in the world.  Can you imagine how magical this place must have seemed to people over the years?

When I got home, I found out the fourth surprise.  The actual spring is only a 500 metre walk from the village.  We turned around just before we reached it.  Grrrr.

Other than the river itself and the ruined castle above it, I wasn’t terribly impressed with La Fontaine de Vaucluse.  It’s very touristy and the locals were not as friendly as the people at our end of the Luberon.  I would like like to go back for a day trip (so I would actually see the source of the river!) but I wouldn’t go near it during tourist season.

After lunch, we carried on to Isle sur la Sorgue.  Isle sur la Sorgue is sometimes referred to as “The Venice of Provence.”  The town is built at a point where the Sorgue splits, creating an island – hence the name.  It’s famous for its antique shops.  Granny likes browsing in antique shops, so I thought it would work well.

Unfortunately, most of the real antique shops were closed.  The only shops that were open were ones that sold upmarket tat.  Like this FABULOUS lamp that’s made out of the front half of a lifesize china horse.  Now, you may not know this, but I quite like horses  – really!!  And I would not have this in my house if you paid me livery for it!

Next to the horse was this display :

Why, oh why?  Is the little roundy man being compared with the roundy hippopotamus?  Why would anyone buy either of these?  Can anyone explain?

I just don’t get it.  Why would you buy one of these?  Where would you put it – in the garden?  Or do these get bought by  rich people who have enormous houses with vast spaces to fill?  Or by people who want to have a whole zoo of giant china animals? 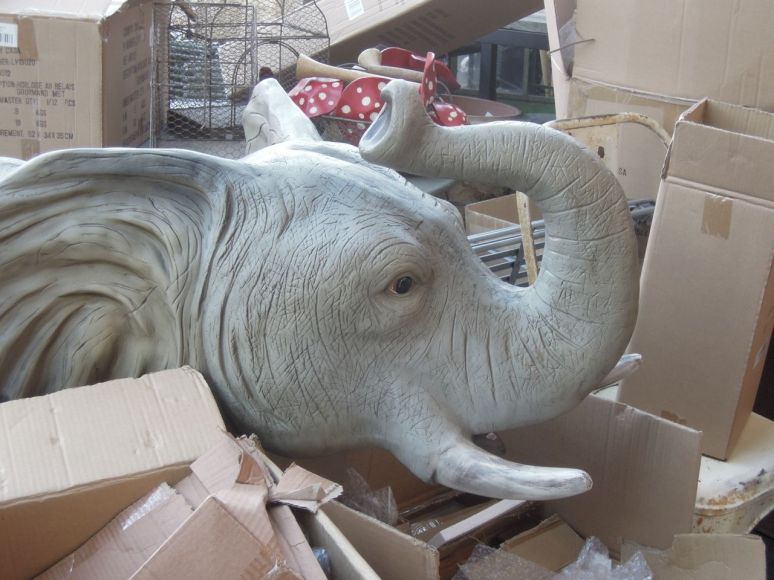 The only thing I could see a use for was this :

Come to think of it, I wouldn’t be at all surprised if Aero has a tiger phobia as well.  I could use the giant tiger statue to work on that, too.

That must be it – giant china animals get bought by horse people to desensitise their horses!