Too Much to Say!

I’ve been finding hard to get into the Blogging Groove for the last week.  I have no idea why – I have loads to write about,  too much, maybe.  I’ve been thinking “I’ll write the last post about New Years in La Ciotat.  No, I’d rather write about the horses.  Hang on, I’ll do that special post I’m planning.  Wait, I have to say something about the Pay it Forward thing I signed up for last year.”  Anyone else have conversations like this with themselves?

I came to the conclusion that the easiest thing to write about at this moment is the horses, so here’s a horse update.  Hopefully writing this will help me get my Blogger Mojo going again.

We took a break over the holiday season, apart from a couple of little solo hacks, and then lengthened that to cover the weekend after New Year as well, because the weather was ICKY.  Cold and windy.  Where’s the fun in that, I asked myself.  But I had arranged the first lesson of the new year with Alexandrine for Tuesday, so on Monday I was thankful to see that the wind had died down and I headed up to do some work with Aero.  I didn’t have much time, as we had spent the morning at Forcalquier market and I decided to run through our travail sur sol stuff, figure out where his brain was and ride him afterwards if he was in sensible form.  Well, it turned out he was so focussed, so responsive and so attentive  with the travail sur sol that I felt that I had to finish after thirty minutes of it.  He deserved a reward and confirmation that he’s a super-good boy.  To ride him would have been the wrong thing.

Next morning, I was heading up for my lesson and I knew I’d ride Aero.  Sure, he’d hadn’t been ridden in two weeks, but I knew his head was in the right place.  What a lesson we had…  I started off with our usual warm-up in walk, trying to get him to stretch and bend through the turns.  We moved onto leg-yielding in walk, then in trot.  Down the centre line, leg-yield to the track.  It’s almost spot-on, there’s just slight tweaking to be done from time to time, capturing the outside shoulder or pushing his quarters a little further over.  Then we moved on to shoulder-in and worked on my problems with it!  Asking for too much, hanging on to the inside rein, crossing the inside hand over the withers… that sort of stuff.  Before we knew it, we were doing shoulder-in halfway down the long side, riding a 10 metre circle and doing shoulder-out for the second half of the long side.  By the end of the lesson, his trot was soft and round.  Still bouncy, but I really felt I was ‘with him’.  We didn’t do any canter work.  Again, I felt he’d been so good for 55 minutes that to throw in five minutes of cantering at the end just for the sake of it would have been wrong.  Next week, I’m riding Aero in my lesson again and we’re doing more of the same.  We’re also going to run through the Club 2 Grand Prix test.  It’s got leg-yielding and canter loops.  No prob!

Wednesday was Flurry’s turn.  We’ll go for a nice ride in the woods, I thought.  Wednesday is not a hunting day, so I didn’t wear my bright orange gilet.  Funny though… I could hear dogs barking in the woods.  They couldn’t be hunters though… not on a Wednesday… hunting days are Sunday, Monday, Thursday and Saturday around here.

So we rode along a trail towards an intersection, listening to the dogs barking furiously off to our left and hearing occasional jingles from the bells attached to their collars.  They really sound like hunting dogs, I thought.  Let’s do a right-handed loop, just to be on the safe side.  So we headed right, through a field of Clear Thinking (Clary Sage!) and as we approached the far end, what do we see but a guy all decked out in orange, carrying a gun, strolling up the other side of the field.  Shit, I thought, looks like the hunters are in the woods…  I called out to him and asked him was it dangerous and he assured me that it wasn’t.  Well, he was going in the opposite direction to me and the hounds were still off to the left and behind me at this stage, so I thought yeah grand it’ll be fine.

We plodded along, Flurry was in grand form and we had a couple of trots and a canter.  Then as we were making our way down another trail, he stopped, looking to the left, ears sharply pricked.  We sat and waited, then I heard rustling in the trees to our left, followed by ta-ta-dum-ta-ta-dum-ta-ta-dum-ta-ta-dum as a smallish wild boar came cantering steadily through the trees and across the trail, not thirty metres away from us.  RUN LITTLE BOAR RUN… I think Flurry had the same thought as me!  (This incident answered the long-asked question of what will Flurry do if we meet a wild boar on the trail.  Stand and watch it, is the answer)

Now what to do… were the hounds about to come baying and howling through the trees?  I could still hear them; they seemed  to be still far away.  And that hunter was still far away behind me… yes, going ahead seemed the sensible thing to do.  So we did.  And all was fine, except the hounds kept getting closer and closer and I felt distinctly uncomfortable as we trotted along a seldom used trail, feeling that a hunter on the opposite hill might just see a flash of movement and let rip.

Finally, we emerged into the last Field of Clear Thinking before the last climb to the farm.  What did we see?  Two more hunters, guns at the ready, waiting for something to emerge from the trees on the other side of the field.  Eh yeah, that would be me…

Anyway, we survived.  I have to say that all the hunters we passed were shifty-eyed and non-communicative.  For example, in that last field, as we approached the first hunter, I smiled and asked if he had killed anything (which is probably not the right way to put it, but hey, I’m a foreigner).  No, no, he replied.  Um yeah… what about that pool of blood I passed twenty metres back, and the furrow dug in the ground where a carcass had been dragged along?  So I’m pretty sure they shouldn’t have been hunting.  But giving them the benefit of the doubt, it’s the last week of the season, maybe the game quotas haven’t been met and they were given permission to hunt an extra day.  Maybe.

One more brief horse story from the week… I had arranged to meet MC on Friday morning.  She would ride up from Reillanne and I would ride down to meet her.  The point where we usually meet is about 45 minutes away from the farm.  Normally I ride Flurry for these longer ‘solos’, I just haven’t had the confidence to do it with Aero.  This week, I knew it would be ok with Aero, and it was.  Thankfully there were no hunters around – that might have tested our newly found confidence! – and we strolled along, calm and self-assured all the way, met MC and Quieto and strolled happily home again.

I have turned a massive corner with Aero.  Sure, he will always be liable to get much more worked up than Flurry, but I’ve ridden through what I think (hope!) is the worst he’ll do and I know I can cope.  He’s turned a corner with me, too.  I think the travail sur sol has helped enormously to build his confidence and trust in me.

2014 is looking like the Year of the Horse in more ways than one. 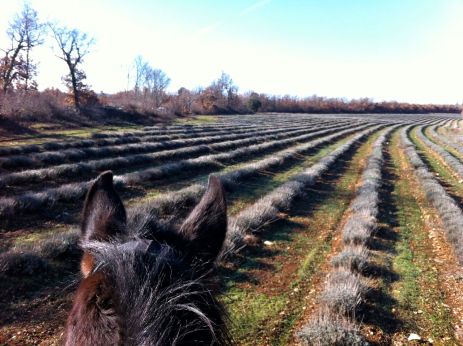