The big news this week has been Rosie the new dog – but there’s been more happening, too!

The LSH was in Ireland for most of last week.  Wednesday was D-Day : Dog-Day.  He was due to visit the CDAWG (Cork Dog Action Welfare Group) shelter at 10.30am to meet Rosie and to officially adopt her.  I was anxiously waiting to hear from him and, finally, just before lunchtime, my phone pinged with a text message.

“Have her, Lovely dog”

Phew!  He was happy with my choice!  Although he told me afterwards that he had met the gorgeous Saffi as well and was just as taken with her as I was.  But no, she is just too big for our little Cinnamon.

I got to Skype with Rosie (and a few humans) while they ate their lunch in Tansy’s house.  She had settled down on the rug and was sleeping peacefully (after being politely told that she wasn’t allowed to steal food off peoples’ plates).

For the next three days, she barely left the LSH’s side.  She travelled with him to see our house in Cork and visit our neighbours.  She visited the nursing home where his elderly mother lives.  She popped in to see his sister and have a cup of tea.  She even sat in on a business meeting one morning.  The more time he spent with her, the more glowing reports I received.

“She understands Go To Bed”

“She seems to be house-trained”

“She sleeps all night, no fuss no whimpering”

They had clearly fallen for each other!  But would a certain little brown and white nose be out of joint when she found out that HER human had a new canine girlfriend? 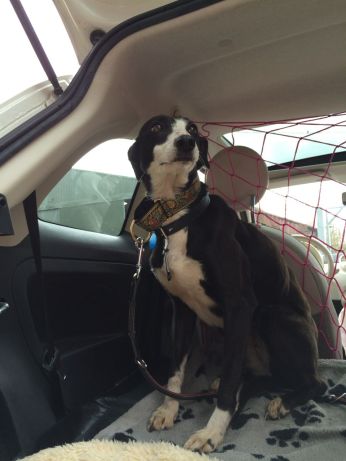 We know nothing of Rosie’s past, but we now think that she may have lived beside the sea – the only time she moved in the car was when they approached the sea and she became quite excited.  Other than that, she remained comatose the whole time. 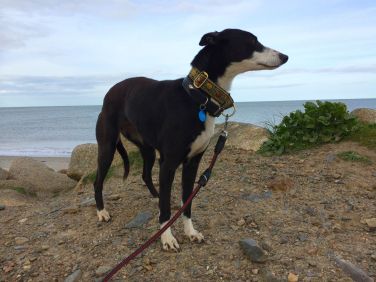 Waiting at the ferry port

Check-in on the ferry was plain sailing, as was the voyage itself.  Dogs have to be kennelled on board, but there are visiting hours and the LSH visited her as often as he could.  She was not keen to eat, but she seemed to be drinking ok.  Nor did she poo or pee any time he took her out to the sandbox provided as a toilet area – but that’s not unusual, Cinny and Cookie were never too keen on it, either.  The kennels were full, and Rosie made friends with everyone, human and canine.  Even the staff-member who looked after the kennels was an admirer by the time they docked in Cherbourg!

The next day, Sunday, they had seven hours of driving ahead of them and hoped to arrive around 5pm.  I should be there waiting to meet them – except I wouldn’t be.  No, I was eh… I was… well I was out for the whole day.  I was at a competition.  With Aero.

Cookie and Cinnamon, meanwhile, were being looked after by our friends, Sprocket and Doodles.  Cookie and their dog, Gari, are the best of friends since he stayed with us.  They’ve recently had to make sure that the garden around their new house is well fenced, as Gari has proved to be a wanderer, if given the chance.  They decided to let Cookie off-leash in the garden so that she and Gari could play, and the two dogs romped happily around the large garden for ages – until Cookie got bored.  Once she had tired of Gari, she set about to systematically explore the perimeter, looking for a weak spot in the fencing.  First she tried to dig her way out under the big metal gate.  They dissuaded her, with some difficulty, and she continued to bound around the garden.  There’s a tiny, rabbit-sized gap under the fence at one point –

The words were barely past his lips when Cookie literally made a beeline for the rabbit hole, which is in a remote corner of the garden.  Like a flash, she squeezed through it and bolted across the open fields behind their house towards the ancient abbey that lies there, Salagon.

There ensued a merry dance, involving one small terrier, two not-terribly-young gentlemen and a handful of hamburger, all around the grounds of the old abbey.  Finally, they caught the little monster.  And now they know why we affectionately refer to her as the HellHound. 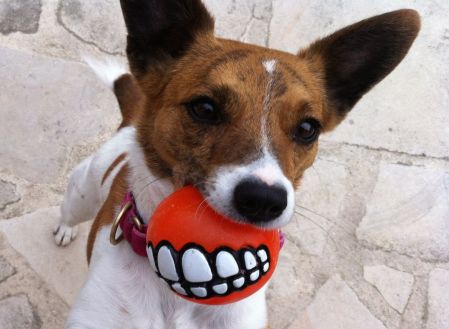 I learned all this when I collected the dogs at 6pm.  Cinnamon had been a perfect lady, they assured me.  Well, apart from shredding Gari’s favourite fluffy toy.  Oh dear, I don’t think my dogs will be welcome in that household again!

We made our way back to Céreste, arriving just as the LSH stepped out of the gate, Rosie at his side.  Cookie went ballistic when she saw him and threw herself at him in a ecstasy of wriggling brown and white fur.  Then she snapped and snarled at Rosie, who was just standing there, looking a bit bewildered.  That’s how Cookie normally greets strange dogs – she gets her retaliation in first, as my friend Denis used to say!

We went for a short walk, and the three dogs settled down, trotting along beside us.  They’ve been getting on fine ever since.  Rosie has been a little wary of Cookie, since their first meeting and one or two other minor ‘incidents’, but Cookie has now decided that she wants to play with her and she tries hard to encourage her.  There have been a few bouts of wrestling on the couch and one session of scampering around the house, with ended up with Cookie zooming out the front door while Rosie was left with a puzzled expression on her face – “Where’s she gone?  Why did she go?”

In the first five days since leaving the refuge, Rosie passed the night in four different places – Tansy’s house, the ferry, a hotel and finally here in Céreste.  She has met loads of new people and new dogs and is now adjusting to a new, and very different, environment.  She’s taking it all in her stride, keeping her elegant composure all the time.  From what I’ve been told, she’s the very epitome of the Lurcher race – laid back, calm, friendly, keen to please.  Oh yes, and good at sleeping.