Long-time blog readers might remember that I’ve experimented with riding Flurry in the bitless configuration of the Micklem bridle.  I found it ok… but not perfect.  Flurry always felt heavy in it, and particularly unyielding for arena work.  I came to the conclusion that if I wanted to trail-ride bitless, it would be ok, but that was before my little adventure with Marie-Christine!  Now, I have no intention of trail-riding bitless – I want to be able to stop when necessary!

So I had pretty much abandoned the Micklem as a bitless bridle.  And then, I started to get notions about riding Aero bitless.  Why?  Well, there are times when he clearly tells me he doesn’t want the bit in his mouth, by clamping it shut when I go to bridle him.  Some days, he opens his mouth willingly; others he just says “NO.”  He’s a good horse and an honest horse and if he there are times when he doesn’t want a bit in his mouth, well, maybe there’s a reason.

The first day I rode him bitless with the Micklem he was surprisingly good.  I spent a lot of time in halt initially, teaching him that when I lift my hands, I’m asking him to lower his head.  He seemed to get the idea, so we set off in walk around the arena.  Now he seemed to have forgotten what he had just learned, so I halted again and spent another ten minutes just lifting my hands, putting pressure on the reins and dropping them completely when he submitted.  Off into walk again and he was better this time… we tried a little trot, we tried a few turns and circles and all seemed good.  We even tried a canter circle on each rein – the brakes and steering worked but I’m sure he wasn’t ’round’ like a dressage horse!  I was very pleased and I continued to use the Micklem a couple of times a week, but Aero’s outline deteriorated steadily.  He just stopped listening to my requests to lower his head, and there were times when I felt I was really hauling on his noseband, to no effect.

Last week, I rode him bitless in my lesson to see if Alexandrine could help.  She watched for a while, saw what was going on, gave some advice and eventually suggested lowering the noseband, but nothing changed.

Finally, she suggested I try riding with the rope halter.

I’ve never liked the idea of riding in a halter – the notion that both reins are attached under the chin just never sat comfortably with me.  Surely you need a rein on either side of the head to be able to steer?  But, I had asked for Alexandrine’s advice, and I figured I should try it.  The Micklem was removed, the rope halter was fitted and I mounted.

What a revelation.  Within minutes, he was dropping his head obediently every time I asked.  We worked long and low for a while and then we worked on asking him to close the angle of the jaw, bringing his nose in and working in a more correct ‘long and low’ outline.  Aero loved it, and became looser and looser the more we did.  I finished the lesson on cloud nine and I came home to the LSH saying “For the first time ever, he really felt like he used to look when Tansy rode him.”  The reason there was such a huge improvement?  Well, the noseband of the rope halter is far narrower than the thick, padded Micklem noseband, so he feels the slightest pressure and the slightest release immediately.  Yes, it’s technically more severe – but I never felt like I was hauling on it, as I had felt with the Micklem.

I’ve ridden him with the rope halter a couple of times since, mostly working on turns and circles.  These aren’t great.  It seems I rely on the bit far too much for turning!  Riding with the halter will really improve how I use my legs and how the horse pays attention to my leg and body aids.  So although I will never ride a dressage test in a rope halter, it’s a really good way of improving my riding so that I become less dependent on my hands.

Yesterday it was Aero’s turn to be ridden, but I decided to ride Flurry.  Well, it was my birthday and I wanted to share it with my favourite little yellow horse!  My plan was to do some schooling for half an hour and then practise our travail sur sol for the Equifeel competition that’s coming up, so we rode up to the arena, carrying the rope halter.

Flurry was in great form – supple, obedient, willing.  We ran through our repertoire – circles, serpentines, straight lines, leg-yielding, direct transitions, shoulder-in, haunches-in.  Well, why don’t I try him with the rope halter, I thought.  Just for fun.

Wow!  Turns, circles, weaving in and out of obstacles, leg-yielding, all with a weight shift or the touch of a leg!  I barely needed to use the rope reins to steer at all!  It seems that Flurry is far more tuned-in to my body language than Aero.  Well, it makes sense – I made Flurry what he is and we really understand each other.  He quickly grasped the idea of working in an outline with the rope halter, too.  I was thrilled.

Eventually I dismounted and we took some selfies : 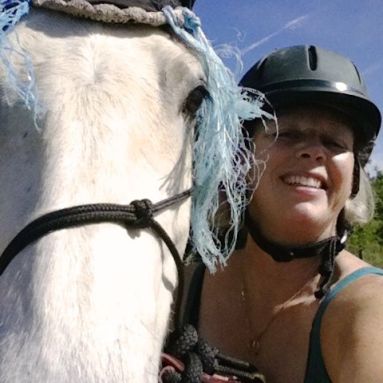 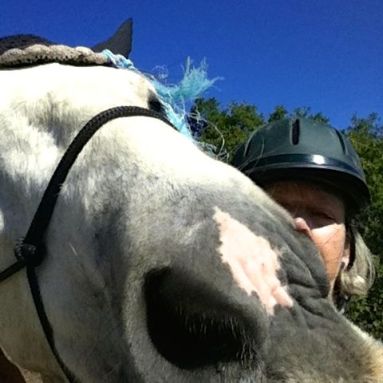 Can I eat the iPhone?

Then we finished up with some ground work, practising his remote halt.  He’s supposed to halt wherever he is when I raise the schooling whip, and wait there.  He’s not as good as Aero’s, but he’s improving.

What a great start to my birthday. 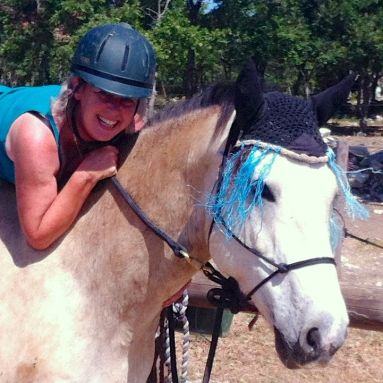 The rope halter was my birthday pressie from the LSH 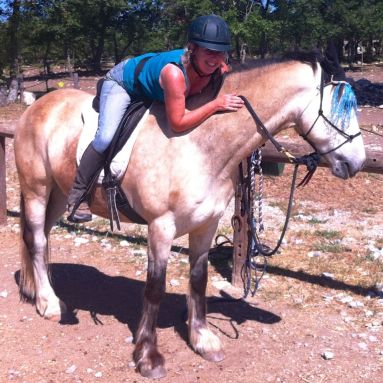 The rest of the day was pretty damn good too.  Granny and the BFF are visiting (the BFF was Granny’s present to me this year, great idea!) and we all went for lunch in the Cafe de la Gare at Bonnieux.  This place was made famous by Peter Mayle in A Year in Provence and, up to last year, was still owned by the same family.  We were disappointed to find that it has been taken over by a Pierre Cardin operation and is now staffed by handsome but inefficient waiters.  They are still doing the €14 set menu lunch, but they no longer include your wine and the whole place has a posh feel to it.  Although the food was good, we won’t be rushing back any time soon.  It has lost its charm.

The day ended with a trip to Forcalquier, where a friend was having an art exhibition.  We had fun chatting and sipping wine, before going for a birthday drink with a bunch of other friends, where we chatted, sipped more wine and ate chips (French fries).  And I got one more present… look very closely… 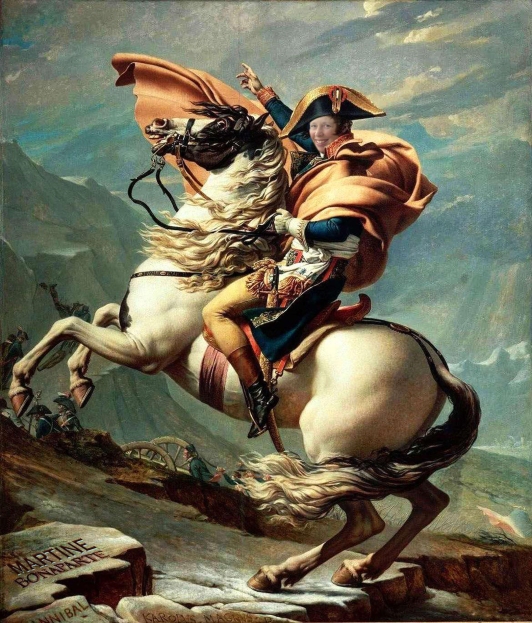