I had the best of intentions to do a non-horsey post during the week, but we have visitors at the moment and between getting up to the horses and spending time with Granny and the BFF, I haven’t had much time for anything else.  Sunday was so exciting that I’m going to defer the non-horsey post once again (it involves pickled garlic, fly spray and a couple of recipes,  and I promise it’ll be worth the wait).

Sunday was the Equifeel Championnat Départemental – Equifeel Regional Championships.  It was being held on our home turf, GAEC de Pimayon.  For the last couple of weeks, there has been a lot of preparations going on.  There’s been loads of strimming (weed-whacking in Americanese I think) and general tidying-up, and MC and I have been busy preparing our horses and practising our Equifeel skills.  (For anyone who hasn’t read my previous blog posts on the subject, Feeling our way Along, Joucas Equifeel Part 1 and Joucas Equifeel Part 2 Equifeel is a format of competition for Natural Horsemanship.)

It’s the norm to inform Club-level competitors (that’s me) of the tests they will face on competition so, last week, Alexandrine told me what we’d be facing.  There were to be ten tests in all.  That’s a lot – on the two occasions I’ve done this previously, there were either five or six tasks to perform.  Also, one of the tests involved the horse being at liberty.  My guys are still not 100% reliable at liberty, although they’re improving.  Aero still gets a bit befuddled sometimes and Flurry just takes the mickey (HAHA!  I’m free!  I can do what I want!)

We’ve been practising hard for the last two weeks.  Aero is really good at lateral movement and backing up, but he gets excited when jumping and can get very confused about what I’m asking.  Flurry is calm and reliable when jumping and understands the game now – pop over the jump, turn and pop over it from the other direction – but he finds the lateral movement difficult and he gets confused about backing up.  We were also facing l’epreuve de van – loading in a trailer.  I didn’t expect any trouble with Aero – Tansy used to stand at the bottom of the ramp, point at the trailer and he’d load himself – but Flurry is a rogue and a chancer and has always tested me if I try to load him when I’m alone.

The trailer was set up for us to practise mid-week, and I had a go with Flurry.  He was awful.  Planted himself at the bottom of the ramp and said MAKE ME.  Alexandrine was there, but there was no point in her helping to load him; instead, she directed me.  Touch him behind the withers with the whip.  Tap instead of touch.  Tap harder.  Build up the pressure by tapping faster and harder (up to a limit, I hasten to add!) until he steps forward, but the instant he moves forward, remove the pressure.  At this stage, Flurry and I are now halfways across the field where the trailer is parked, but he moves forward finally, I desist immediately, we walk all the way to the bottom of the ramp again, he puts two of his feet onto it and then swings out to one side.  Block him on that side… he swings to the other… block him on the other side.  He’s just being a sausage, she said.  She was right, he knew exactly what I was asking!  I persevered and, five minutes later, Flurry was in the trailer with me stuffing carrots into him and telling him how good he is.  He shot out backwards before I asked him, so he had to go back in again.  A little quicker, this time, but he still tested me.  Alex suggested I go and do a couple of things he finds easy, give him loads of praise and then come back to the trailer again, so I did this.  Wonder of wonders, he hesitated for maybe two seconds at the bottom of the ramp and then walked in.  Result!

The day before the competition, I ran through all the exercises with both horses.  Flurry walked into the trailer first time, without even an instant’s pause, but Aero decided to act the fool.  Gah.  Horses!  Still, I was confident that I’d be able to load them both within the two minutes time allowed on the day.

The weather has been magnificent recently, up to 35C by day.  A little hot for working the horses, but I’ve been getting up really early to avoid the worst of the heat and the flies.  There was a change forecast for Sunday – thunderstorms and rain, with the temperature expected to drop by 15 degrees.  Saturday evening was hot hot hot.  Was it really possible that Sunday would be any different?

At 3.30am, I was awakened by crashing thunder overhead and then the torrential rain started.  It was still pelting down at 7am.  The farm would be a sea of mud and, being on top of a mountain, it would be dangerously close to the lightning.  Would they go ahead with the competition?  Oh yes they would… a lot of work had gone into organising it and it was going ahead, with fingers crossed that the storm would pass.  But the weather-gods were kind to us and the thunderheads moved on at about 8am, leaving cloudy skies and occasional showers.

After the storm had cleared

Waiting to start with Aero

Finishing the four-leafed clover with Aero. You have to run loops around a four blocks set out in a cloverleaf pattern. Puff. Pant.

Waiting to start the four-leafed clover with Flurry

RUN RUN RUN… but the lead rope should be slacker…

…and then reverse your way through a zig-zag.  Those blue things are called ‘plots’ in French; I don’t know what we’d call them in English!

Aero is pretty good at this but we went for the 10 point option where I’m allowed to follow him. For 15 points, I’d have had to stay behind the pole while he zig-zagged all by himself.

Jumping on the circle. We did the 15 point option, but Aero did his customary WTF? stop at the first attempt so we lost two points

Aero on the tarpaulin. I went for the 15 point option, where the lead rope is connected via a light elastic, so you can’t drag the horse around; the horse must walk on to the tarp, pause for 10 seconds and then walk off

Flurry walking onto the tarp.

Jumping the double. For 10 points, you run along just outside of the line of jumps. For 15 points, I’d have had to be 1.5 metres away and for 20 points, 4 metres away 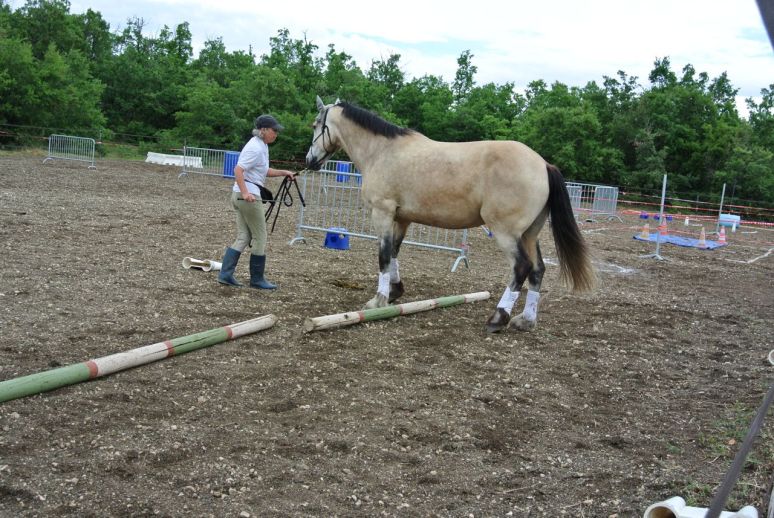 I was delighted with him, he didn’t rush and he didn’t get his legs in a muddle, but Aero lost an uncharacteristic four points here.  I was going for 15 points with him, and I think I lost focus.  He became confused – Forward? Back? Oh, sideways.. but he had walked over the pole at that stage and were penalised for it. 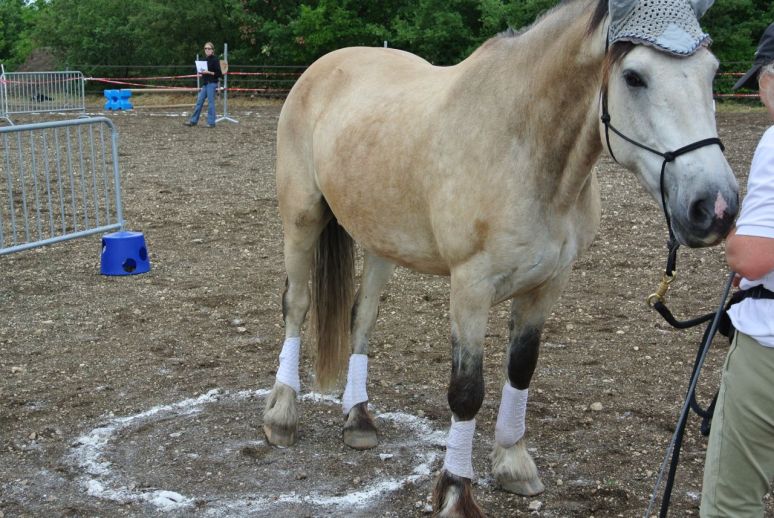 The pivot, or pirouette. The horse must keep his hind legs in the circle and move his front end around sideways. The hardest part is getting the back feet into the circle!

Normally we struggle with this, but the horses rose to the occasion and they both scored a faultless 10 points here

Va et vien – reverse and return. For 10 points, you follow the horse as he reverses for 4 metres; for 15 you stay at the start as I’m doing in this picture while the horse reverses 4 metres and for 20 points you stay at the start and the horse reverses 8 metres over a pole on the ground as well.  Aero is great at this, perhaps I should have tried for 20 points but he scored an easy 15.  Then I lost my head with Flurry and tried for 15 with him, too, forgetting that he’s not so good at this.  He was totally confused and I ended up saying I’d just take the zero as I walked down to help him figure it out. 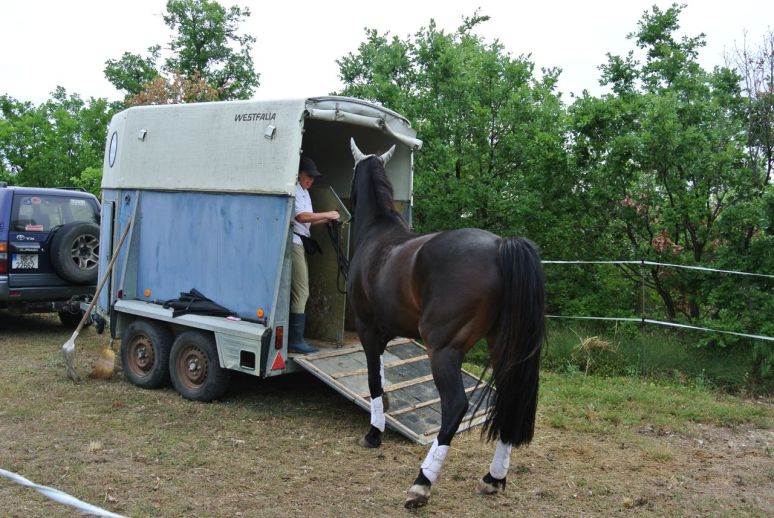 The trailer. Aero having a minor blip…

…before going in very well, despite (or maybe because of) the fact that his bête noir, Grisou the donkey was approaching the fence behind him.  Flurry did this perfectly, too!  Hooray!

Alexandrine and family were very happy with the turnout.  There were 21 competitors in my section; five in the elite section and everyone turned up, despite the very dodgy weather.

MC and Quieto strutting their stuff in the Elite section

Practicing the pivot beforehand. This Arabian is grey, but he lives in an area with ochre in the ground, hence the orange coloration!

It was lovely to see this Friesan mare getting a kiss on the nose from her owner every time she completed an exercise, whether she succeeded or not.

There was a barbecue and loads of food laid on when everything had finished, so I went to get Granny while they added up the scores and prepared the food.  We were back just in time for the prize-giving.  MC won the Club Section with Quieto… but guess who was second?  Me and Aero, no less!!!  Yippee!

Not only that, but Flurry and I were fifth, too!  We came home with loads of loot – two bags of carrots, a salt lick, a head-collar, 2 plaques and 2 rosettes to add to our French collection.

See?  I told you Sunday was exciting.