I’ve been working either one horse or the other each day for the last week, except when I was away at Vidauban, of course.  The August break has really done Aero good.  He’s been incredibly attentive and responsive with work on the ground.  After a particularly good session last week, I decided to finish up riding him (bitless) for ten or fifteen minutes.  My back has been a bit grumbly (I haven’t been practising my yoga, bad me!) so we stayed in walk and just worked on turning and bending.  He is improving steadily, so much so that we were doing serpentines with me just using my leg & weight aids to turn.  Hmm, I thought.  I wonder… so I tied the lead-rope around his neck and rode with just that to see if I could get the same response.  Indeed I could… stop, start, turns and circles with no reins at all (In walk. Don’t get too excited!).  Who knows where this bitless stuff will lead!

On Friday, a friend’s daughter came up to the horses with me.  She lives in Yorkshire and is interested in finding out more about how the French do their equitation ethologique.  She started off with Flurry, given that he’s usually the more sensible of the two, but we quickly swapped when I saw how much he was taking the mickey with her.  It wasn’t her, it was Flurry – he was just in a cheeky mood.  Aero was super with her, and she with him, so much so that she rode him for a while, just to get the feel of riding with the little rope halter.  She loved it – I think we have another convert on our hands!

Meanwhile, I worked with Flurry and I came to the conclusion that he needs BootCamp.  He was just being cheeky – pushing the boundaries all the time.  So on Monday, I was up at the farm bright and early and did some groundwork with him, insisting on sharp responses and correctness.  I clearly didn’t insist enough, because during my lesson the next day, Alexandrine pulled us up on a couple of things.  Just little things, mind you – he was much improved since Friday!  I finished up the lesson riding him and I was reminded once again how important it is (especially for him) to continually release the contact and make sure he continues to work forward and in balance.  I tend to get caught up in Doing Stuff and I forget to release while I’m busy thinking about riding my leg-yields or serpentines or whatever.  So that’s my homework for this week – remember to release.

I’ve only been out on one hack since we started back after our August break so, this morning, I got up to the farm early (to try to avoid horseflies) and took both boys out together.  Aero once again surprised me by how well he remembered our leading (ponying) lessons.  We did one practise lap in the arena and it was really easy to get him to walk/trot/halt beside Flurry, with his head mostly level with my knee.  We did the easy, forty minute route out the back of the farm and along the ridge that looks towards Vachères. 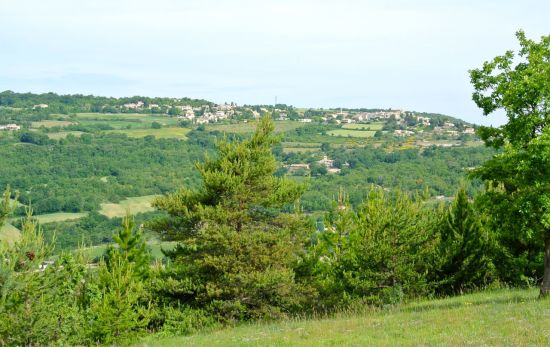 Vachères, a photo taken in June. Juggling my camera and two horses turned out to be a bit tricky.

Both horses were really good, even when the rich neighbour’s helicopter was flying right overhead.  Aero was mostly good at keeping up with Flurry and not dragging at me, but there were times when the trail was so narrow that he had to stay behind.  Once he starts to lag, he’s inclined to get fall farther and farther behind, so I called him to trot and catch up every time we had space, which worked.  I’m looking forward to getting the two of them into the arena to play with this stuff again – I’m wondering just how much I could do with him from the back of another horse…

We returned via the steep climb that passes their field.  They were both keen to rush up it, but they were both very obedient when I said “No, you may not return home at top speed.”  Good boys!

I was very pleased with them both.  So much so that when I saw that poor Rusheen Duff (one of their field companions, a French Connemara pony) was all alone, we finished the ride at their shelter.

Rusheen Duff (I think it’s a form of Roisín Dubh)

It was a good morning’s work.  I had two horses exercised and was home and showered by 10.30am.

Two half-Connemaras (one disguised as a zebra) and one full Connemara. I think their field should be called Co Galway.

PS If anyone out there can recommend a good Natural Horsemanship trainer in Yorkshire for my friend, please send me an email.  Address is in the sidebar on the right.  Thanks.