Every time I come to Ireland, I catch up with as many human friends as possible.  The equine friends have always been neglected.

Not this time though.

I made my way down to Skevanish where two of my former liveries now reside.  I got a lovely ‘hello’ from Paddy! 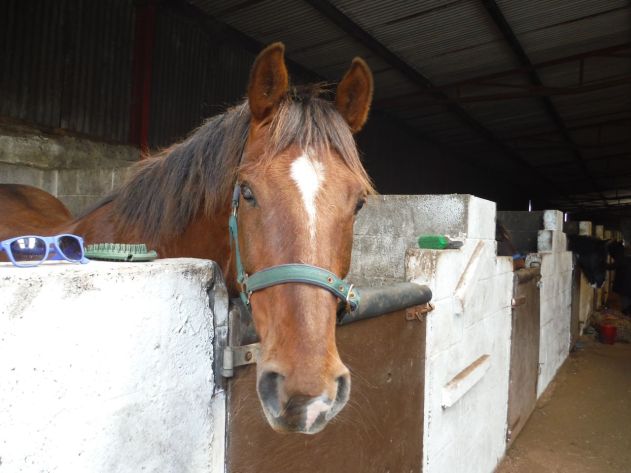 He was with me for almost ten years… actually his story is told in one of the Ballyloch Stories that’ll be released in a couple of weeks.

My other ex-livery, Phoebe, was less thrilled to see me.

I can’t remember who came first, Phoebe or Paddy.  If I was pushed, I’d say that Phoebe came first… anyway, she was with me about the same length of time as Paddy.  I always thought that Paddy was like an inflated version of Phoebe, although their personalities are very different.  Well, Phoebe’s mostly Arabian and Paddy is half Irish Draught, so that’s not surprising.

Paddy really is a super cob.  Now he is teaching the grandchildren to ride.  Denis would be so proud 🙂

Phoebe cheered up when she was being led back out to the field, her work done for the day.

These guys have a great life at Skevanish, where they live out all year round – something I just couldn’t do with a mere four acres.

We stayed and chatted for ages, Paddy snoozing over my head. ❤

It was nice to reconnect.

And I’m not jealous of the indoor school and the lovely level outdoor arena.  No, not jealous at all.

PS. The next Ballyloch Story will be released here tomorrow!  If you can’t wait, it’s already here on Amazon!