The LSH has never liked performing animals, so I was surprised when he gave me two tickets to a Spectacle Equestre for our recent anniversary.  Apparently there was a new Salon de Cheval taking place in Marseille, with a Gala performance in the evenings.  Cool!  Trade stands, general horse stuff – I could spend the whole afternoon there working hard on not spending any money!  I offered to take someone else along with me but no, he gritted his teeth and resolutely said he would accompany me.  Fair play to him.

Then the Regional Equifeel Championships were rained off the previous weekend and deferred to the Sunday of the Salon de Cheval.  Help was needed on Saturday afternoon to set up the Equifeel ‘course’, so I said “Never mind, it’ll be easier not to spend money at all those trade stands if I’m not there.  We’ll just go to the Spectacle in the evening.”  Which, from what I’ve read on this Facebook page, is just as well.  It seems there was not much to see at this particular Salon de Cheval. (PS That Facebook page may have disappeared.  It was called ‘For the victims of the international Salon de Cheval at Marseille’ and they’ve been threatened with legal action by the organiser of the Salon.)

Friday evening and Saturday afternoon were spent setting things up and practising for Equifeel – that’ll be in the next blog post.  At 8.30pm on Saturday evening, we were settling ourselves into the Palais de Sports in Marseille.  It’s a pretty big amphitheatre, with seating for more than seven thousand.  Was the fact that there were only about 500 people present a bad sign?  Hmm…

After a fifteen minute delay, the show kicked off with this guy.

He did a lot of sideways stuff with his horse in walk first.  Maybe to try to reduce the amount of tension his horse was displaying.  When he trotted, I cringed – the horse’s trot was just awful – shuffly, short and losing rhythm.  He might have gotten a 5 for it in a dressage test – if the judge was in a good mood.  Unsurprisingly, whenever he tried to do anything in trot – sideways or even just extending the trot – the horse lost its rhythm and its forward movement, or else it threw in a step or two of canter.

The French are mad for Spanish walk, so of course that was shown.  It’s very impressive, but once again this horse couldn’t keep any sort of a rhythm going.  He’d throw a leg out dramatically and then take a couple of short, hoppy steps before throwing out the other leg. 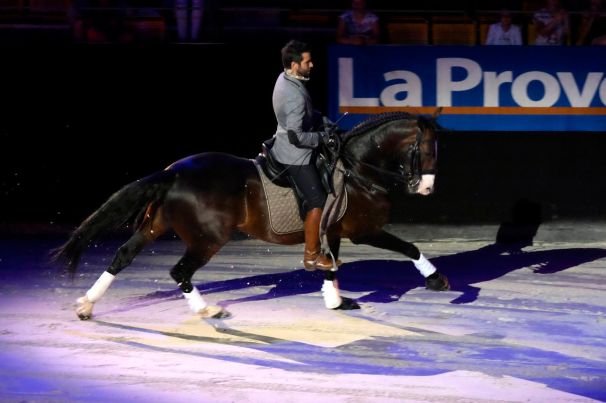 …followed by making the horse kick out…

…and rear.  Yes, two things every rider wants their horse to learn.

I’m happy to try to figure out Spanish walk, but rearing and lashing out are not on my horses’ curriculum!

Anyway, he finished with a bow and a smile and the crowd all clapped politely.

The next act came in as he left – two Camargue Gardiens, all decked out in their Gardien gear. 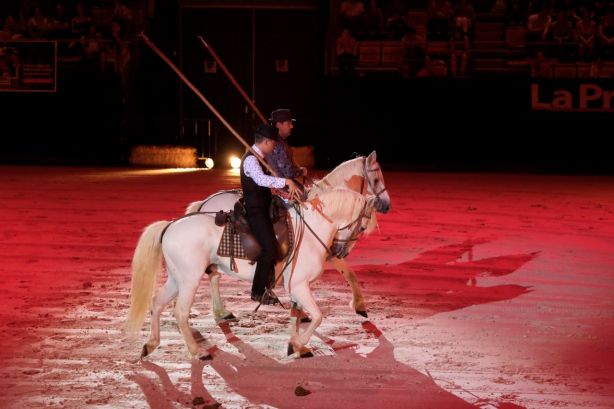 The horse in the foreground really, really didn’t want to be there.  I felt sorry for his rider, he was clearly sitting on a ticking bomb and sure enough the horse tanked off and whizzed sideways with him multiple times.  He kept the horses head clamped down tight with that big curb shank 😦 My kind husband-photographer didn’t capture any of his Whoops! moments and actually, I’m glad, as they weren’t pretty and I was feeling sorry for the little horse.  And for his rider, who was not having a good day.

I have to admit that I didn’t realise it at the time, but Camargue horses can have a running trot, something like a Paso Fino.  As a result, I was looking at these guys and thinking “Holy Crap, can none of these horses trot?” as they ran around with a four-beat trot.

Both horses waltzed around each other a bit and they did some funky stuff with their poles but it was all a bit amateurish, to be honest.  I was hoping things would improve because, otherwise, there was a fair chance we’d be leaving early.

Ok, next in was a Pas de Deux.  They looked promising as they trotted side by side down the centreline, but things went pear-shaped as soon as they asked the horses to pass anywhere near the audience.  It looked to me like neither horse had ever done a show like this before and they were terrified by the crowd.  All I can say is thank goodness the hall wasn’t full.  And at this stage, I was thinking we’d be home early for sure.

When we saw the next one coming in, we both had the same thought – she looked like she was on the way to her wedding.  Irish and English readers will understand.  Anyone else should Google ‘gypsy wedding.’

Oh look, Spanish walk again!  There are only so many movements you can ask a horse to do under saddle, I believe Spanish walk is easy enough to teach and it looks flashy.  I can see why  they all do it. 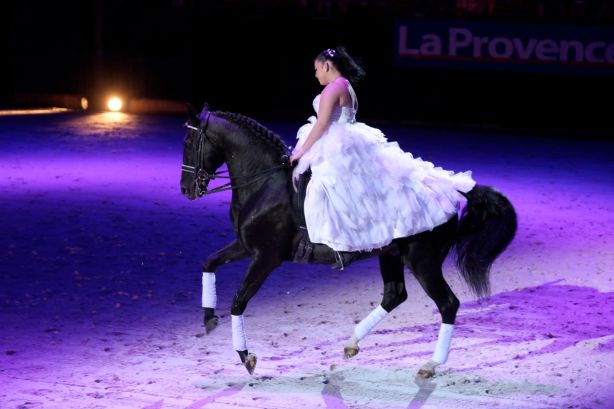 But there was something different about this combination.  It seemed to be more of a partnership, with the horse trying a lot harder and the rider forcing a lot less.  They did some nice half-pass work and some pretty changes in canter.

Next in, we had the Spanish equivalent of Gardiens – vaqueros?  Correct me if I’m wrong please!  Things were definitely looking up – these guys were good.  Although, like the Gardiens, I thought they were a bit rough on their horses, with the exception of one rider – the only girl on the team.

They did some amazing things with their poles, pirouetting underneath them with deceptive ease. 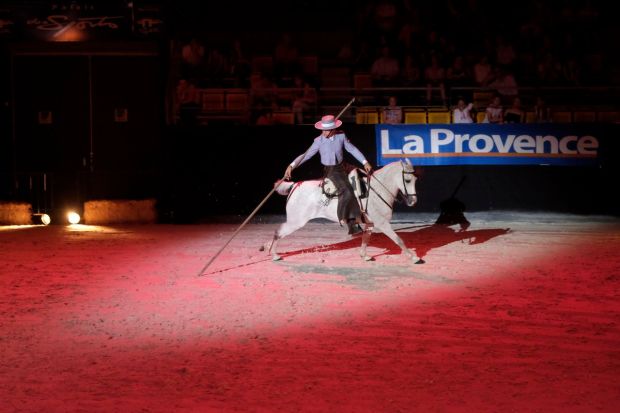 They finished up galloping around a circle with all four abreast.  Not easy, and very impressive as the outside horse galloped flat out and the inside horse basically spun on the spot. 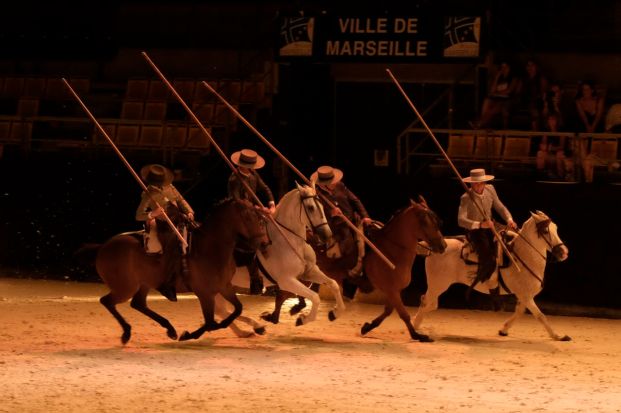 They left the arena and a lone grey stallion came galloping in all by himself and all the kids in the audience went “Oooh il est magnifique!”  Then the stallion stopped to sniff at some poop on the ground and did his level best to cover it up, so all the kids went “Ewwww” instead of “Oooh.”

The trainer appeared through the curtains and cracked his whip a few times to get the horse’s attention which wasn’t easy – the poop was far more interesting.  This horse seemed to only have one trick – he zig-zagged back and forth in front of the trainer like a border collie in front of a sheep, or a quarter horse in front of a cow.  It did nothing for me.  To me it just looked like an angry horse who had been whacked with the stick to get him to hop from side to side.  Maybe I’m doing the trainer a disservice, though, because the rest of his horses didn’t have that ‘angry’ air.

The stallion went out and two dun horses came in to work with the same trainer.  They did their stuff – circling around, ‘stay’ and recall (Hey! I can do both of those with my horses when I work them together!), Spanish walk (raises eyes to heaven), and a bit of rearing on command.  Yup, all becoming a bit samey now… but these guys definitely had a different attitude to the trainer.  There was a bit of cuteness there :

So, two dun horses is a win-win scenario as far as I’m concerned.  What could be better than that?  How about three dun horses? 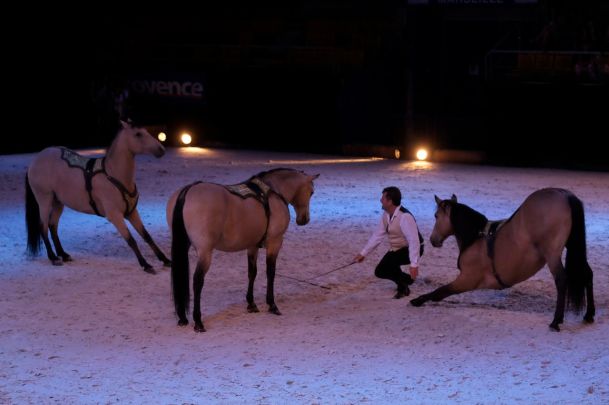 I was beginning to think that there was a real Connemara look to these guys… When the didely-eye (sheesh, how do you spell that?) music came on I realised that that’s what they were!  No wonder I liked the look of them!

There was a definite change in the quality of the show at this stage, which had started with the ‘Gypsy wedding’ girl.  It was much more professional, much more polished and the horses had all clearly been doing this for some time.  It turns out that the main part of the show was presented by one family group, Hasta Luego.  They’re based in Nîmes and have been doing this for 30 years now.  No wonder they seemed professional and polished.  They present shows all summer long at their home base :

And from reading their website, I’ve learned that the French name for this genre of horsemanship is l’Art Equestre – Equestrian Performing Arts would be a nice way to put it in English.

You can take it that things stayed good for the rest of the show.  Sure, there was a lot more Spanish walk and rearing, but it was well presented.  This lady came in side-saddle and did some dressagey stuff of course – walk, trot, canter, sideways stuff, changes.  Then she… well… yeah…

After a while, she stopped and took the bridle off, riding with just a cordelette.  Would she run through the same repertoire?  Um, no.  She stuck to walk.  This kind of walk. 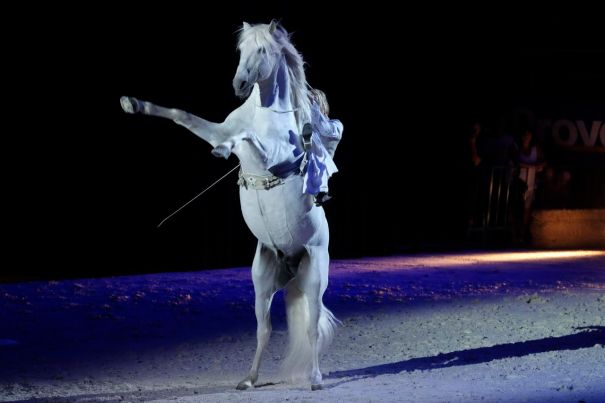 Then she dismounted and – OH! Look! Spanish walk! 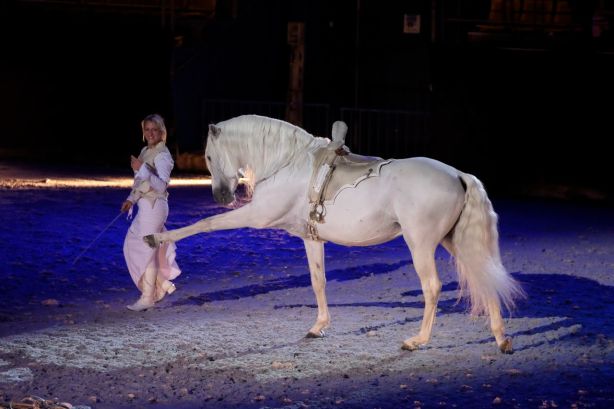 I suspect he’s an old horse – his trot seemed a little stiff.  Maybe all the rearing is taking its toll 😦 But it was plain to see that they had a nice relationship.

I’m like 80% of the way towards getting Aero to lie down like this.  I WILL get there!

Aside : I would probably have found her cordelette work more impressive if I did not keep my horses somewhere where this kind of thing happens on a regular basis :

The tempo changed with the next act.

These were the youngsters. 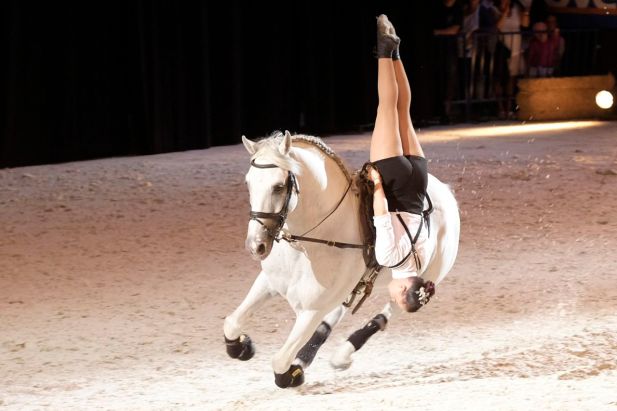 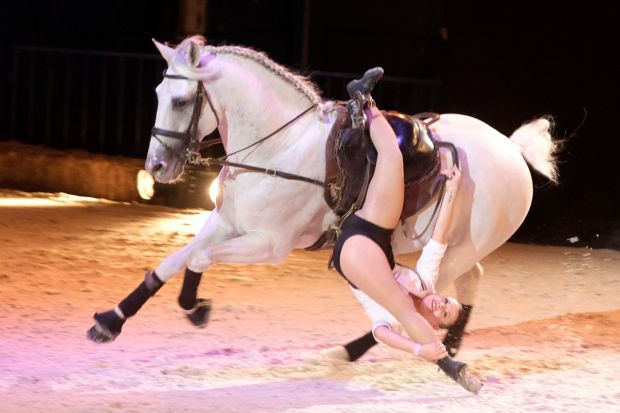 And a lot of fun to watch. 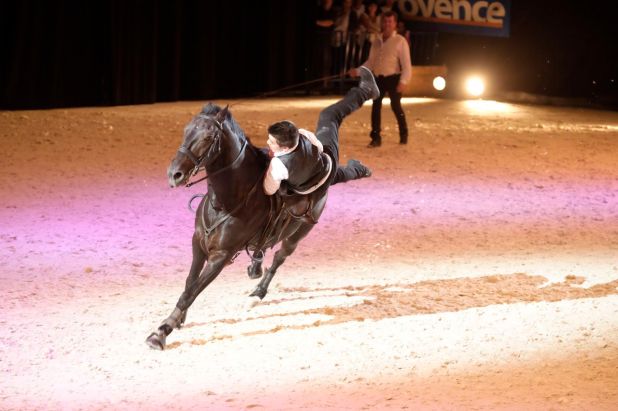 They really got the crowd going.  So I just didn’t ‘get’ the next act.  Girl in floaty sea-green outfit with reins attached to her belt comes in and wafts around on grey horse to the strains of ‘My Heart will go on.’

Maybe she was just there to give the other kids a breather after their vaulting performance, because she was followed by one of the vaulting boys, on a Haute Ecole type horse.

There was some more Spanish Riding School type stuff…

performed by horses who seemed to be literally One Trick Ponies, because I don’t think they had any other rôle in the show.

I could be wrong – maybe that’s the same grey that the lady rode side-saddle?

This pony had two tricks – he reared…

…and he sat down.  The perfect kids’ pony?

I have to say, I don’t like all the rearing and walking on hind legs.  All I could think of were the horses’ hocks – they are not designed to take all of that weight at such an unnatural angle.  And I wonder just how long a working career these guys have.  Don’t get me wrong, I don’t think there’s any abuse going on here.  Well, no more than in any other horse industry – breaking and galloping TB yearling springs to mind.  But it’s not for me.  I enjoyed most of their show (Spanish Walk and all!) but this stuff had me cringing.

The last act was another girl who was on her way to a wedding.  Aw, but it’s a really pretty dress!  And I love how it matches her tattoo!

The high spot of her act was this : 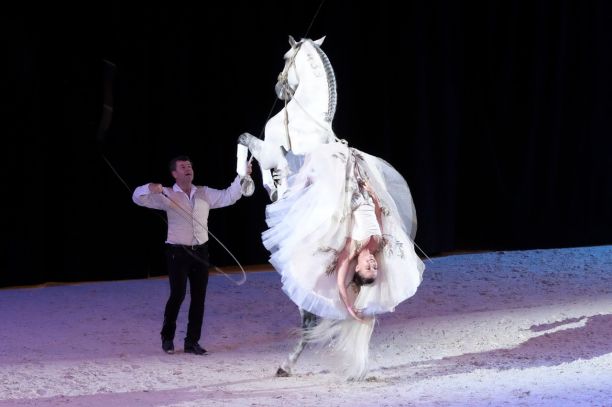 It was certainly impressive!  The French lady beside me nearly lost her life the first time it happened, and she made a good attempt at breaking the record for how many times you can put ‘La” after the word Oooh.  At least eight.  Oooh-la-la-la-la-la-la-la-la.  Her daughters were in hysterics beside her.

All the performers came in for a curtain call and that was it.  Show over.  Despite its shaky start, I did enjoy it. 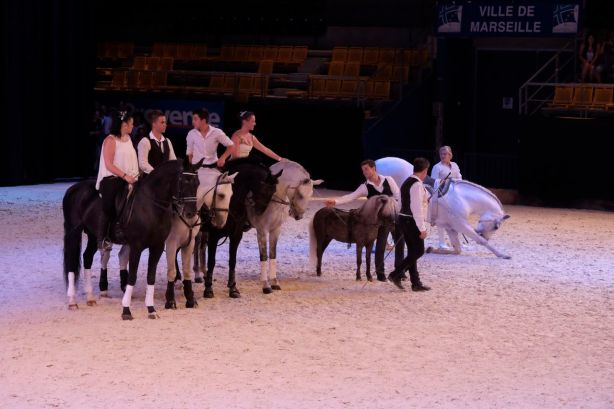 Brave LSH for sitting through it with me.

PS This EXTREMELY photo-heavy post is brought to you thanks to the LSH’s photographic skills.