Rivaldo is the third stabled horse, one of the second group of horses to see me each morning. 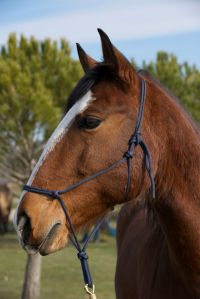 He arrived at the Farm about two years ago, a stressed out bundle of tension, nervous and fearful.  I remember standing beside Alexandrine as we watched him pace anxiously around the paddock, and I remarked that I hoped his owner could ride.

“Yes she can, but it doesn’t matter,” was her reply. “She is happy just to work with the horse.” (More or less. And in French.) 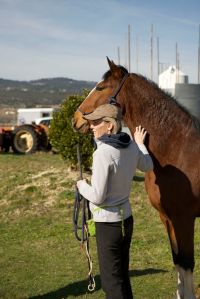 I seem to recall raising an eyebrow – maybe I wasn’t fully sold on the hippy horsewoman idea at that stage – but I said nothing and I observed with interest as Rivaldo slowly settled down over the following weeks and months.  And indeed his Mum truly wasn’t bothered whether she ever rode him or not.  She and Rivaldo took to equitation ethologique enthusiastically, and started competing in Equifeel competitions last year – in fact, I think I transported him on his first outing.  His Mum was thrilled with him that day.  Although he didn’t place particularly well, he took everything in his stride and accepted reassurance from her anytime he began to feel anxious.

His story slowly emerged.  “That horse sent two people to the hospital,” his Mum was told when someone recognised him at an Equifeel competition.  It turned out he had an impressive reputation (in a bad way!), but there was a reason for it.  A previous owner had competed him at quite a high level in dressage, but that person had mental health issues.  Frequently, he would be taken back to his horse box and beaten after competing – whether he had gone well or not.  He had had no structure and no consistency in his training for a long, long time.  He was eventually passed on to another rider, a tough-but-fair sort of character, who tried to retrain him, but who ultimately pronounced the horse as irredeemably broken.  Crazy was the word used.

But Rivaldo and his Mum slowly built up a relationship founded on trust and respect. He has become a different horse, calm and confident, eager to please.  So much so that she decided to try riding him.  It’s been a few years since she rode, so she enlisted the help of Oriane, who is the ‘riding replacement’ while Alexandrine is on maternity leave.  He’s been working under the saddle now for just over a week.  Here’s a slideshow from a session this week :

His biggest issue has been worrying about doing the right thing.  The first few canter-trot transitions, he became so full of bottled up tension that he began to piaffe.  Initially his canter work was very tight and contracted, as if he was expecting to pirouette, but he is progressing steadily.  Oriane kept him in the halter for the first week and has just reintroduced the bridle, which caused an increase in tension, but he began to relax when he realised that he wasn’t going to be yanked in the mouth or hauled around.

Meanwhile, Rivaldo’s Mum is currently getting fit by riding one of the other horses, in preparation for the day she first rides her own horse.  What a moment that will be.