The Last Adventure of a Small Brown Dog, Part 2

It’s taken me a while to finish this two-part post.  I realised last night that it was because I needed to know how the story ended. And the story has ended now. 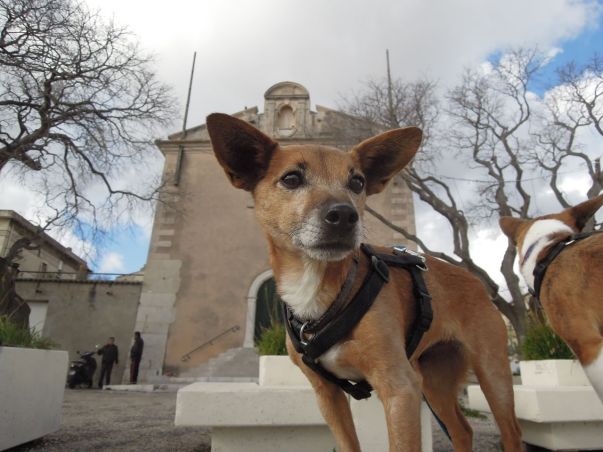 In case you missed it, here’s part 1.  Last Adventure of a Small Brown Dog Part 1

The evening before we left for Chamonix, I dropped Cookie off at the kennels in Montfuron.  She knew where she was going.  She jumped down into the footwell in front of the passenger seat and stayed there the whole journey, giving me the big sad eye any time I looked at her.  I couldn’t help but wonder if she felt she was being punished for what had happened the day before.  Probably not.  I don’t think dogs are too good at figuring out causality.

The following morning, we dosed Cinnamon with Zylkene to help her cope with the journey, then we delivered Rosie to our friends.  Cinnamon was on my knee and I put her on the ground when I got out to talk to them.  Mary and Glen agreed that she didn’t look great – they had looked after the three dogs a couple of weeks earlier when the LSH was away and there was an Osteopathy course I wanted to attend, so they knew what her ‘normal’ should be.  Worst case, we’d be looking for an emergency vet in Chamonix, we agreed.  And at least all of her family would be with her, should the end happen there.

The first section of our journey was autoroute, for about an hour.  I had made a nice cosy nest with cushions at my feet and hoped that Cinny would settle and sleep.  She didn’t.  She was up in my arms; she was down on the floor; she was up again; down again, panting smelly old-dog breath into my face… not distressed, just unsettled.

The second section of road was the long and winding stretch between Sisteron and Grenoble.  It takes about an hour and a half normally.  The LSH drove slower than usual, so a certain Small Brown Someone wouldn’t be rattled around too much.  She still didn’t settle.  We made a pit stop.  She sniffed around with a little interest and eventually dropped her bum and had a wee.  I took her for a short walk and noticed that she seemed a bit off-balance.  In car terms, the steering had a strong pull to the right.  Soreness?  Or had she had a stroke on top of the post panic attack trauma? Or was she still just a bit dazed?  She also refused to drink, but we’ve found that to be normal any time we travelled long-distance with herself and Cookie.

She finally fell asleep when we hit the autoroute again after the Vallée de Trièves and didn’t wake up until we arrived at our destination.  We were like parents with a child who has finally fallen asleep – afraid to stop the car, and speaking in whispers in case she awoke.

First thing on the agenda once we’d met up with the Young Folk was lunch, followed by a 30 minute walk.  I should have known what the 30 minute walk would entail.  After all, there was nothing but Alps all around us.

The plan was to carry Cinny in my rucksack, like a baby in a carrier.  We’ve done it before, and she’s fine with it. 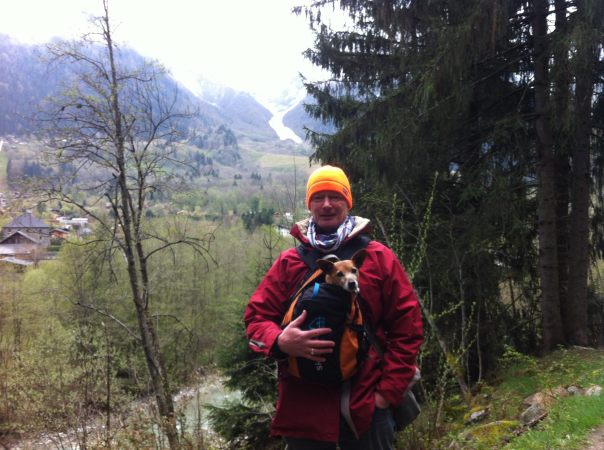 The problem was, I’d brought the wrong rucksack.  It was much too small, and she just didn’t fit.  Oops.  We more or less tied her into it with her leash and, with Aideen (her REAL Mom, remember?) carrying her, we set off.  Up a path that was more or less vertical. 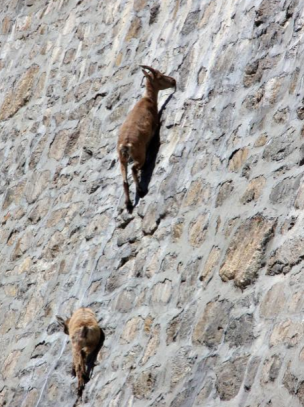 Tansy and Rowan skipped ahead like a pair of Ibex climbing an Italian dam.  The three of us who are not accustomed to Alpine strolls wallowed along in their wake.  Eventually, Rowan took on the role of dog-carrier, which worked much better.  Somewhere near the top, the trail levelled out.  We decided to let Cinny walk for a little bit (mostly to give her carrier a break).  To our amazement, she scampered along like a two -year old, practically towing the person at the other end of the leash along behind her.  The pull to the right was still there, but she’s only a tiny little thing, so it was easy to correct her and keep her on a relatively straight trajectory.

We went all the way up to the foot of the Glacier des Boissons, where Aideen, Tansy and I did some yoga. 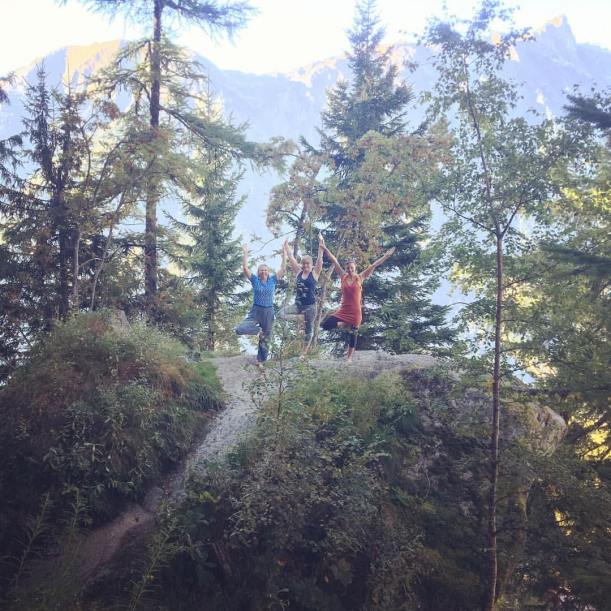 After admiring the view, we made our way back down again.  This time, Cinny scampered along for all of the first section – a good kilometre, I’d say.  She was only carried when the going started to get really rough and steep again.

There’s life in the old dog yet! we said.

That set the tone for the weekend.  She amazed us with how well she coped with everything.  We brought her almost everywhere with us; sometimes she was carried, sometimes she walked.  When we went out for a meal, we left her in the rented chalet, safely locked up in her cage.  We also locked her in the cage at night, and I realised that she appreciated the security of it.  There was no wandering around the room, looking for her bed, which had become a hallmark of her days at home.

One thing that was still worrying me was her continued reluctance to drink water.  On the evening of the first day, she was sitting on Aideen’s knee and she yawned.  Suddenly I saw the reason – there was a puncture wound in the middle of her tongue.  She must have bitten through it, either when Cookie snapped at her or during her panic afterwards.  We coaxed her to drink some milk with a little water in it that evening, and the next morning I bought a 20ml syringe.  We syringed water into her mouth a couple of times a day and she gradually lost the slightly dazed air she had.  Dehydration is not good, no matter what age you are.

One of the things we wanted to do that weekend was the Three Countries, Three Meals tour.  Breakfast in Switzerland, lunch in Italy, dinner in France.  Well, of course Cinnamon came with us.

Breakfast in Switzerland was a picnic lunch beside the lac d’Emosson, high up in the mountains. 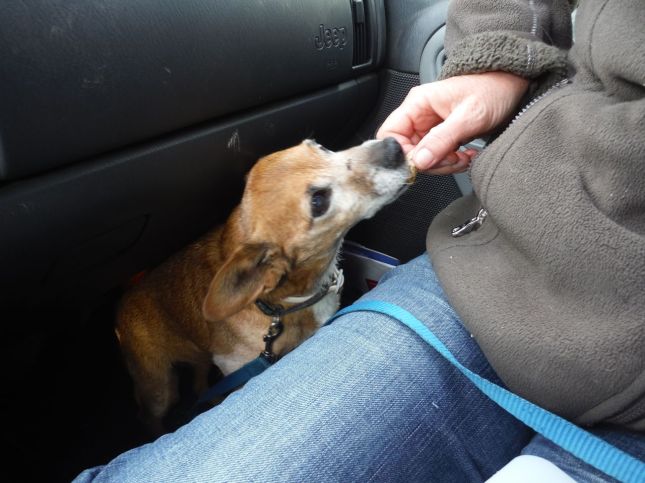 Picnic breakfast at the Barrage d’Emosson in Switzerland

Everyone else went for a hike along the top of the dam, but we thought the cold and altitude would be too much for a Small Brown Elderly Dog, so I stayed at the car with her.  We walked around the carpark a few times, but it was seriously COLD!  There’s no doubt that she was better off in the car.

Lunch in Italy was pizza (of course) in the village of Courmayeur,  just on the Italian side of the Mont Blanc tunnel.  The young folk went for a walk uphill.  The old folk and the Small Brown Dog chose to go downhill to the river, basking in the heat reflected off the wall beside us.  Cinny trotted along happily, investigating the wall for lizards, who were enjoying the last of the summer sunshine.  Little terriers will always have certain instincts, no matter what! 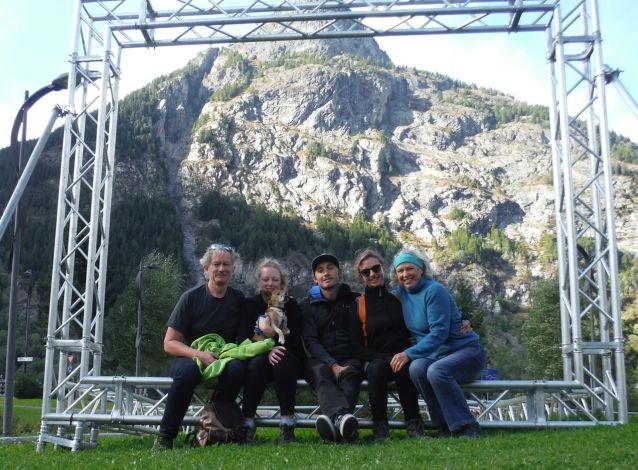 We didn’t actually bring Cinny along for the third part of the day, dinner in France.  We felt she’d had a long and tiring trip, and that she’d be better off tucked up in her bed.  When we came back afterwards, she was still fast asleep.  Right decision.

But we needed to discuss her future with the rest of the family before we left for Provence.  Everyone agreed that it wouldn’t be long before she’d be making her final trip to the vet.  Even if her mouth healed quickly, she was becoming steadily weaker on her legs.  And then there was the senility, too.  We told them how she spends a lot of her time ‘lost’, either in the garden or in her little room downstairs, wandering in confused circles and becoming stuck in corners or behind furniture.

The morning we left, the girls said what we all knew would be their last goodbyes to their Small Brown Four-legged sibling.  I managed to hold back the tears.  More or less. 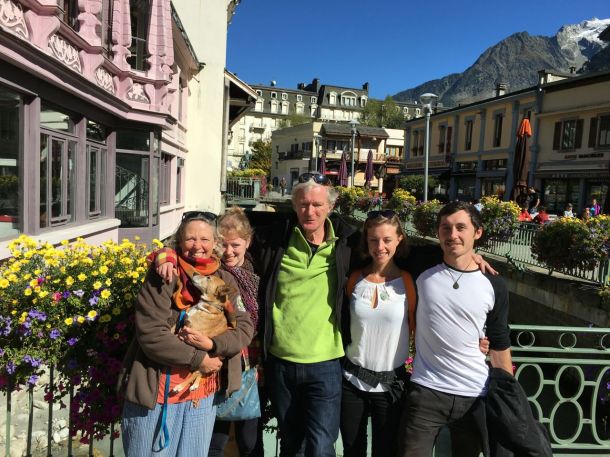 And this is where I intended to finish The Last Adventure of the Small Brown Dog.  But I couldn’t.  I knew deep down that it wasn’t the end.  The end would come, six weeks later.