How to banjax a back

First, have a root canal treatment.  This involved approximately an hour in The Chair at the dentists.  Now, I’m not someone who has a dentist-phobia – in fact, I worked as a dental nurse for a couple of years.  But no matter how cool a patient you are, you’ll still tense up while someone is yanking things out of one of your teeth.  Part of the root canal process involves scrubbing out the tissue from inside each of the three roots (yes, it was a molar) with a little thing called a broach – it’s like a teeny-tiny bottle brush.  One of those kept getting stuck.  Much yanking was needed.  And no, it’s not at all reassuring when the dentist says “Phew!” as he mops the sweat off his brow.

Second, try to get a room painted before Christmas.  It was all done bar the skirting boards and the radiator and I was determined to finish it before we went to Chamonix to spend Christmas with our daughters.  The skirting boards needed three coats.  That’s a lot of time to be hunched over on the floor, but I got it done.  Then the radiator had its first coat.  More sitting on the floor, slightly twisted this time as I was turned to face on the radiator.  When I finished, I stood up, my back went TWANG and I said “Oh, fiddlesticks.”  Well, I said something that began with an F. 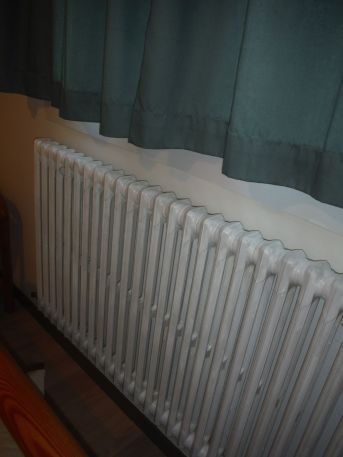 Third, go down to the local Christmas market the day after the aforementioned TWANG.  I had taken some nurofen, and the back was feeling a bit better, so I thought I’d be fine.  The market was lovely – very small and very local, with free vin chaud.  Yum.  After wandering around in the cold, looking at all the stalls, I was getting a bit sore again. 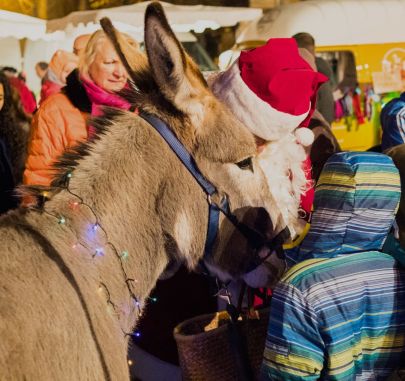 Culprit #3. No, not Santa and his donkey. The whole Christmas Market thing. (This was before the donkey said “Stuff this for a lark” and headed home with Santa hanging grimly onto the leadrope)

In hindsight, I should have gone home at that stage, but instead we adjourned to one of the local hostelries for a meal and a few drinks with friends.  By the time we left, I was in agony.  I made my way very slowly and very painfully up the stairs that night (our loo is upstairs, our bedroom downstairs) and didn’t come down again for three days.  Those three days were spent flat on my back on the bed in the spare room, or making brief forays into the bathroom or kitchen, leaning on walls or furniture as I inched my painful way along.

My lovely osteopath friend saw me as an Urgence on the Monday.  She had never seen me quite so crippled.  She treated me again on Thursday, to do whatever she could to make the six hour drive to Chamonix on Friday bearable.  Thanks to her and the wonders of Volterène tablets, we made it – and we had a great Christmas!

The whole back-banjaxing thing was very disappointing, on many levels.

I had survived a summer of forking hay and straw around the place, mucking out stables, dragging water troughs around and generally doing lots of physical work.  I was a bit achey in my lower back, but nothing unbearable.  It was mega-frustrating to be pole-axed by a series of seemingly trivial things after all that.

On the advice of my doctor and my osteopath, I’ve been following a strictly gluten and dairy free diet since mid-September (anyone who knows how much of a cheesaholic I am will know how difficult this has been for me).  Apparently my colon had lots of gas (quelle surprise! Doesn’t everyone’s?) and they were both suggesting that this is the root cause of my back issues.  Nope.  Don’t think so, folks.  This was the very worst back pain episode EVER!

I had also been working very hard to keep up-to-date with the horses’ hoof-trimming, and I’d been doing a damn good job, if I say so myself.  Three weeks of no care at all meant that Aero’s front left splayed happily to the inside and re-opened the white line separation I’d been working on, while Flurry’s Famously Enormous Frogs grew too big and developed little pockets of bruising on his back feet.  The farrier visited last week and gave them a good trim, taking the pressure off me for another two weeks or so, but I’m still not even up to picking out all eight hooves, let alone doing a two-hoof trimming session 😦

Anyhoo, onwards and upwards.  I rode today for the first time since Dec 15th, just fifteen minutes walking in the arena, working with the neck loop (cordellette in French), and then back down to the field.  Aero and I had been progressing nicely ‘hands-free’ before the back episode, even braving a little canter one day.  There’s another thing to be frustrated about, but we’ll get there again! 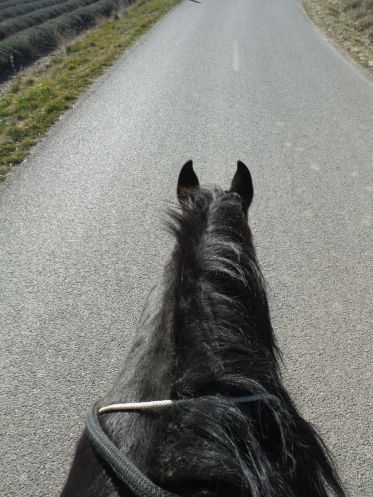