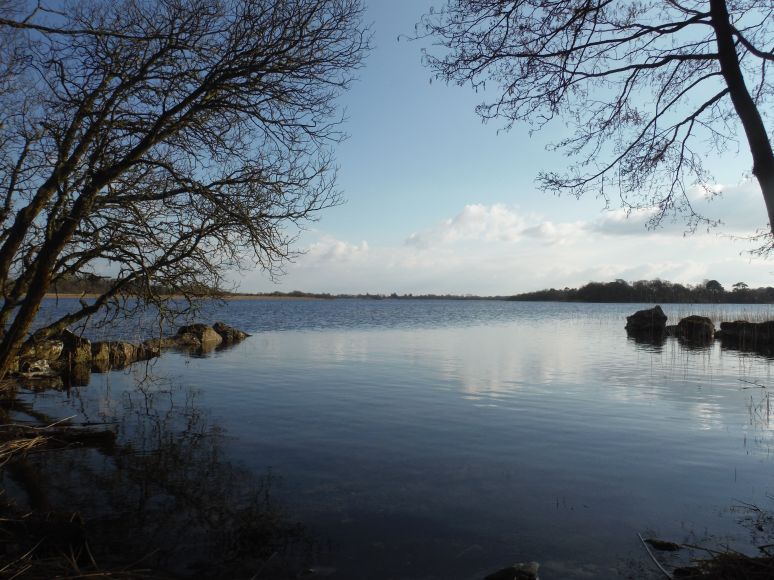 The lake in front of Granny’s house

I spent a couple of days in Ireland last week, visiting my mother.  Each time I go back, I feel more and more like a stranger in a strange land (any other sci-fi nerds out there?).  This time, I even started to notice the differences while I was waiting for my flight in London.   Read on, and see if you can relate to what I’m talking about…

And on the subject of cars… while I (mostly) manage to drive on the correct side of the road for whichever country I’m in, remembering which door to use to get into my mother’s car blows my mind every single time.  And that carries over when I get back to France… I have to stop and think “Which side?” for the first week or so.  And even then, I frequently get it wrong.

There are strict protocols to be followed when greeting people down here in deepest, darkest Provence.

When you meet a friend or family member, you kiss in greeting.  The number of kisses varies from region to region.  Around here, it’s one on each cheek.  15 kilometres away in St Martin, it’s three.  How the hell are you supposed to know these things??  Apparently, you’re supposed to be able to follow the lead of the other person and keep on exchanging kisses until they stop, but I’ve never been any good at following a lead when dancing, so why should this be any different for me?  I’ve disengaged early far too many times, but thankfully I am forgiven because I’m a foreigner (and apparently, my accent is ‘mignon’).  In general, people seem to start on the left, then go right, then go left again as necessary.  I stick to this left-right-left system as a rule of thumb, but despite my best efforts, there have been one or two awkward On-The-Lips moments when I meet a practitioner of the right-left-right system.

When you meet an acquaintance or a business associate, you MUST shake hands.  The LSH was helping a friend install some equipment in their shop and was fascinated by how much time was taken up with hand-shaking first thing in the morning.  Everyone went around the room shaking hands on arrival.  The last person in had fifteen hands to shake.  I’m not kidding, thirty minutes of the work day went on hand-shaking.

Each time I go back to Ireland, I find it harder and harder to drop these rules.

When I arrive at my mum’s house, I have to remind myself to greet her with our normal Irish family greeting – a big bearhug and a kiss. I must not slip up and bisous her officiously on each cheek.  That would not go down well.

If I were to greet my Irish friends with a kiss on each cheek, they would recoil in horror and gossip about “Yer wan and her fancy French ways” afterwards.  If I fail to greet my French friends this way (but only the FIRST time I see them each day.  This is part of the protocol, too.  I wish there was a guide book, it took me ages to figure that one out) they think I’m in a huff.  It comes naturally to me, now.  So much so, that in Ireland, I have to stop myself from running around kissing everyone.

When my mother’s home help arrives in the morning, I find it strange that she sticks her head in the door and says Hello to me.  What’s wrong with that?  Well, we should be shaking hands of course!  I have to force myself to remain seated, resisting the urge to go over to formally shake her hand.  It’s the same with Seán, who’s been doing odd jobs in the garden and around the house for more than twenty years.  There’s no doubt that if I was greeting him over here, there would be a handshake at the very least, but most probably we’d kiss each other warmly on each cheek.  Over there, it’s a “Howiya! How’s it going?” sort of greeting.

I live in a tiny village here in Provence.  And it’s just damn rude if you do not greet everyone you pass in the street with a polite “Bonjour.”  My mum lives in a slightly larger village in Co Clare.  And, over there, it’s just damn weird if you say “Hello” to everyone you pass.  And it’s even weirder if you say “Bonjour.”  Yes, it happened.  No, I don’t want to talk about it.

Ah, the weather.  Where would the art of conversation be without it?  While I was away in Ireland, it rained very heavily here in Provence.  For a morning.  The whole village was talking about it for the next week.

The day before I left Ireland, the sun shone ALL DAY LONG!  And it even shone the next day!  All of a sudden, people were smiling at strangers and saying things like “Great day, thank God.”  If the sun shone all the time in Ireland, we’d be the happiest people on earth.  Just imagine, maybe the Fields of Athenry would never have been written – what would we sing at rugby matches instead?

Also, note how the Irish always throw in a divine thanks when something good happens.  Even the non-believers.  To be sure, to be sure.  I’m sure there are some French people who say “Grace à Dieu” from time to time, but I haven’t met any of those ones.  Yet.

Food is a topic of conversation that comes up regularly in both cultures.  It’s the same.  But different.

Conversely, only in France will you overhear a group of young men having an in-depth discussion about the best wines to serve with foie gras.  Yes, I was there, too.  No, it was not a group of well-to-do young toffs, it was a bunch of normal lads, some of whom work in agriculture, some in construction.  They sure as hell know their wines from a young age over here…

I knew I was with Irish people when I was waiting for my Ryanair flight to Shannon and I spotted three bright orange young ladies, sporting Amy Winehouse-type updoes, three-inch long eyelashes and shocking-pink velour track suits.  I’m sure they thought they looked fabulous, and the young men with them seemed to find them attractive, but.  Ehhhhh.  No.  ‘Nuff said.

On the other side of the coin, a long long time ago, I was queuing for a flight to Nantes when I realised that I was the only person in the queue who was not wearing a black coat.  Boy oh boy, but the French sure are conservative about outerwear.  ‘Nuff said.  Again.

Light switches.  How can anything as commonplace as a light switch cause trouble?  Very easily…

In France, when the switch is down, the light is off.  In Ireland, it’s the opposite.  WHY?  Isn’t that something that the EU could have standardised, instead of bananas and carrots?  This generally doesn’t cause a problem until you’re faced with a multi-switch panel and you turn every single light on and off until you finally find the one you want.  I’m sure my neighbours sometimes think I’m trying to send out an SOS some evenings…

And then there’s switch for the bathroom light.  In Ireland, it’s NEVER EVER inside the bathroom, it’s outside, on the wall beside the door.  For safety reasons, I believe, because electricity and water don’t mix.  For the same reason, you will never find an ordinary electrical socket in a bathroom.  In France?  The light switch is inside the bathroom.  Usually (but not always) beside the door.  And our bathroom has two ordinary electrical sockets positioned just above the twin sinks.  And, strangely, I have yet to be electrocuted in my bathroom.  But watch this space.  It could happen.

Speaking of bathrooms brings up something which holds a special place at the heart of every Irish household.

This is great big copper tank, used to heat water, which can be found in the hot press, swathed in lagging jackets and blankets.  The hot press has been an Irish institution for generation.  It’s where you keep your spare bedclothes, clothes and towels, so that they can benefit from any micro-therms of heat which slip out through the immersion’s insulation.  The Immersion has a setting which allows it to heat just a ‘sink’ full of water or you can go mad altogether and flick it to ‘bath’ (but just once a week, right?).  Normally, it also has a timer connected to it, so that the household has hot water at the appropriate times of day.  Despite this, every single Irish Mammy that ever existed has been known to cry out in pain “Oh no! I forgot to turn the immersion off!”

Compare and contrast to the French equivalent of an Immersion.  Great big tank, yes.  Presumably copper, but you can’t be sure because it has a sort of built-in insulation wrapped around it.  No big puffy lagging jackets; no extra blankets draped over it.  And (gasp of horror) it doesn’t live in a hot press, it lives wherever is handy.  Like in a corner of the garage.  Or in a little annex at the back of the house, cold and uninsulated, as in our rented house in Cereste.

To be fair, the built in insulation seems to work quite well, because that little annex was bloody freezing in the winter, so it was no good at all for airing clothes.

It’s enough to give any self-respecting Irish Mammy heart failure. 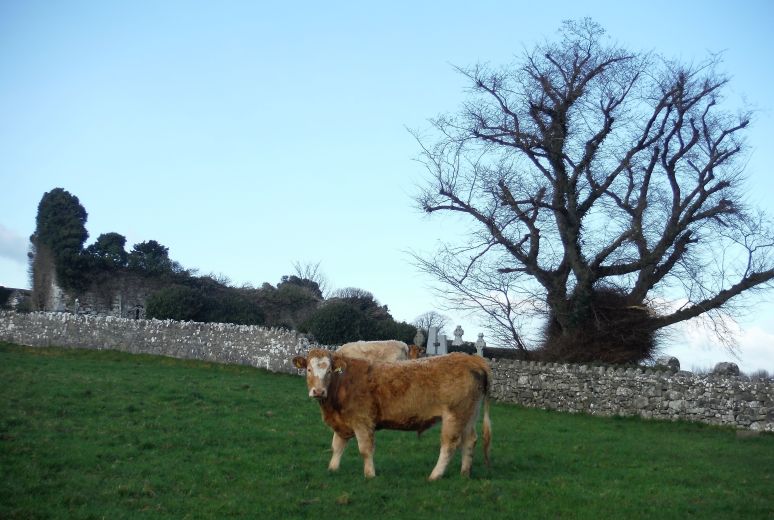 Ehmmm excuse me, I think you left the immersion on