My father was a keen gardener.  When we lived in Shannon, in an estate house with a standard small garden, he grew flowers in his garden and vegetables in an allotment just outside the town.  I have many childhood memories of weeding and petal-picking, which I hated.  More interesting jobs like actually planting things, squishing pests and pruning were reserved for adult hands.

I wasn’t a fan of the allotment, to be honest.  I was notoriously bad at eating my veggies as a child – to this day I still detest many green leafy vegetables.  Brussels sprouts?  Cabbage?  Bleuchhh.  So while I liked the pretty flowers in the garden, the whole idea of growing vegetables seemed a bit pointless to me.

Fast forward thirty years or so, and I was slightly better at eating my greens (I still can’t handle sprouts and cabbage, though).  I was also beginning to be concerned about the amount of chemicals in the food we were eating.  Organic produce was outrageously expensive, so with the help of a friend, I started to cultivate the very old, very mature manure heap beside our arena in Cork.  This stuff was amazing!  It was like digging into a bag of the most expensive compost money could buy!  And we grew the most fantastic gigantic vegetables that first year, in a very small space.  The following year, we tackled the rest of the manure heap, digging out the nettles and scutch, and replacing them with beans, onions and other stuff. 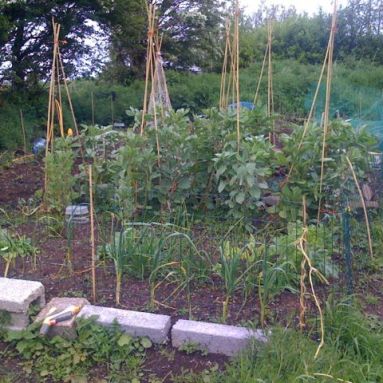 The first season on the muck heap. We took over the vibrant green area in the background the following year. 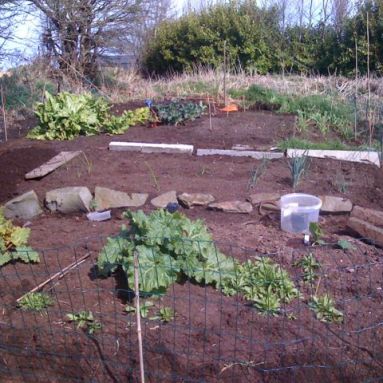 The second season on the muck heap.

The results were so successful that, over the following winter, we installed four raised beds at the back of my house and filled them with the black gold from our muck heap.  Our growing space was more then quadrupled, and we successfully cultivated strawberries, broccoli, curly Kale, courgettes and other squashes, peas, beans… and more.  Enough for two small households for the whole summer.  All delicious, all organic.

Me and my giant broccoli head

And then I moved to France.  The manure heap became a wilderness once again, as did the raised beds.

There are three raised beds somewhere under those brambles 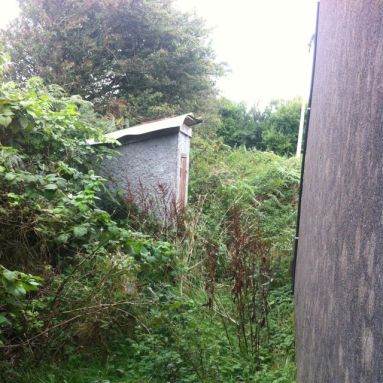 I grew a couple of things in the garden in Cereste, where we spent almost three years, but I didn’t want to make any great changes there, seeing as we were just renting.  We moved into our own house two years ago, too late in the season to plant, but last year we put in a small potager.   We planted onions, herbs, rhubarb, tomatoes, cucumbers and peppers, with mixed success to be honest.  I’m not used to growing things in a hot, dry climate and I was appalled at how much water our little garden consumed.  Particularly seeing as we were in a serious drought for most of last summer.

A steady supply of tomatoes all summer 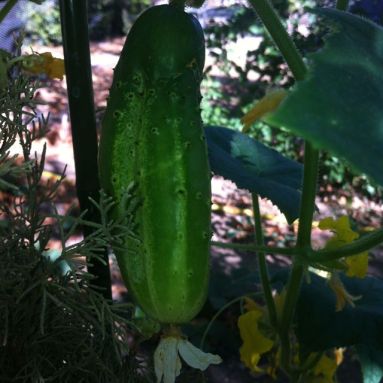 The odd cucumber, too

Despite the lack of stellar results, we’ve doubled our growing space this year.  A couple of months ago, I began to research irrigation methods, the idea being that we’d install the irrigation system as we laid out the new beds.  We’ve got two 1000 litre tanks for rainwater.  The idea was to get a third tank, install it beside the garden, fed from the rainwater tanks, and run a standard drip irrigation system off it – goutte à goutte or drop by drop as the French call it.  The problem was, losses by evaporation are huge using this method.  Our water consumption would far exceed 3000 litres over the course of the summer.  Sure, I’ll be able to fill up a tank on the back of the Canyonero from the village fountain (fed by a spring, it has never run dry, even last year, the driest year ever here) but even so, maybe there were other irrigation methods?  I turned to Google… 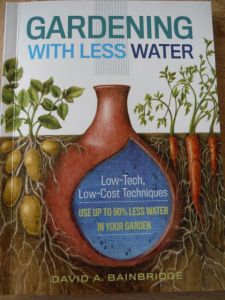 …and I found this book.

Low cost? Sounds good.  Low tech? Sounds even better.  Use up to 90% less water?  Really?  Could that be possible?

And our adventures with alternative irrigation systems begins.

Next in series : We’re Growing Pot