Those who follow me on Instagram (@magreenlee FYI!), and those who are friends with me on Facebook, will have seen the daily photos of our recent tour of Ireland.  A few people asked me why we were calling it a “Farewell Tour” – well, it sounds good! But more relevantly, we feel we won’t be back again for more than a few days at a time, visiting family and friends.  This trip was about US TOURING OUR COUNTRY OF BIRTH and we didn’t make time to fit in visiting along the way, apart from one or two pre-planned things which more or less fell in line with our touring plans. 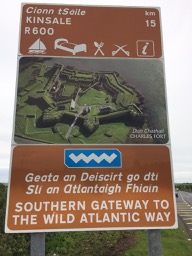 When I posted the last day’s photos on Instagram I mentioned that I would do a recap on the blog.  What we loved, what we hated, what we will go back for.  So here it is…

The plan was to follow the Wild Atlantic Way, a sign-posted route which follows the coastline from Cork in the south all the way up to Donegal in the north, marked and marketed by the Irish Tourism Board in recent years.  In fact, the roads have always been there, so it has always been possible to do this route.  Just no-one ever thought of actually promoting it as a tour.  Kudos to whoever came up with that idea!

We decided to more or less skip West Cork, feeling that we know that part of the world pretty well.  We dined in Kinsale, the official Southern Gateway of the WAW, on the eve of our departure, and set off for the Beara Peninsula the following morning.

We LOVED Beara.  We will probably return for a walking tour some day.  We spent a day on Dursey Island, 6km long and 1.4km wide, and walked almost the whole length of it and back.  If you visit Ireland, DO IT.  Get into the scary wooden cable car, cross the raging rip tide, and land on the island.  Maybe even spend a couple of days there, soaking up the peace and quiet; watching the gannets and other sea-birds; even seeing dolphins in the distance.  Yes, we saw dolphins.  Brilliant.  Then you get to do the cable car ride in reverse! Totally worth it.

The only BUT about the Beara : We stayed in Castletownbere, a large fishing village on the southern side of the peninsula.  BUT it was the start of the second week in September, and already it felt like a ghost town. Our Airbnb host was unengaging, unhelpful and uninterested, although the house was clean and the breakfast was ok.  I got the impression that he was completely jaded after a long and busy season, perhaps, but you’d think he’d have been prepared to suggest somewhere to eat, or local places of interest to visit the following day.  I don’t like naming and shaming small businesses, so I’m not going to name the B&B, but if you plan on visiting the area, choose your lodgings carefully.

After the Beara, we had booked two nights in Parknasilla, a posh hotel near Sneem in Co Kerry.  €350 a night… this was our big, spoiling-ourselves splurge.  The hotel is lovely, the staff were delightful, the extensive grounds with their little islands, walkways and bridges were great. 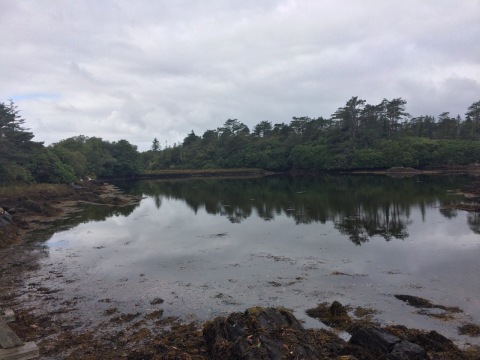 Taken on one of our walks through the Parknasilla grounds

I’m sure you can feel the BUT coming…

Our €700 accommodation bill included one evening meal in the hotel restaurant.  It was barely ok.  I had monkfish, which was fine, but the accompanying vegetables were inedible – either under-cooked or over-salted.  At breakfast the following morning, I went to make toast with gluten free bread, which was set out in plastic packets, two slices per pack.  It was mouldy… I lost my appetite.

But the biggest BUT for us was the number of small children in the bar and sitting area, throughout the day and into the evening.  We ate in the bar on our second night, and there were seven – yes SEVEN – babies aged two and under, toddling around and making noise (as babies do).  I don’t know about you, but I prefer my posh hotels to have less of a playgroup ambiance going on.

So if you’re planning on a couple of nights luxury living in an Irish hotel, here’s a thing to check.  Does the hotel have self-catering accommodation on-site?  If it’s a yes, move on. They tend to be rented by young families who (very kindly) try to keep their energetic and possibly non-somnolent youngsters away from public sleeping areas.  But then of course they will avail of the hotel facilities… they’re entitled to, after all!  My advice is to look for a hotel that has a no-children policy.  They do exist.

After Parknasilla, we went to Co Clare, where we drove from Loop Head to Doolin, where we stayed in a small B&B.  That’s a nice drive.  Worth doing.

At the Bridges of Ross, on the Clare coast

BUT Doolin, sadly, did not live up to our expectations. What I remember as a tiny village with a lively reputation for traditional music has become The Irish Holiday Village on an industrial scale.  Several enormous B&B’s dominate the landscape, along with the ubiquitous Irish tourist shops and three gigantic pubs.  Our landlady was very pleasant but was not prepared to commit herself when we asked for a recommendation for food and music.  Not a good sign…

We went to the closest pub, Fitz’s, a short walk away.  The food was good, if typical, bar food, the staff were very pleasant.  The music, alas, was a huge disappointment.  Perhaps we are spoiled with the quality of our local artistes in Reillanne, but the two groups who played on the night we were there left a lot to be desired.  No oomph, no zest, no life in their performances.  We left early.

The following morning, we headed to Dublin, for some Family Fun Time.  As we drove away from Doolin, we passed another two enormous and completely out-of-context new hotels.  I know Ireland needs to develop its tourism industry, but surely it can be done tastefully?

Excuse me while I barf…

After Dublin, we went on to the North and the Giant’s Causeway.  Yes.  Do it.  And the Carrickarede rope bridge.

Been there, done that, the Sister bought me the t-shirt!

From the Giant’s Causeway, the plan was to rejoin the WAW and continue from the North down southwards as far as Galway.  The first county on the route was Donegal.  I’ve never spent any time in Donegal before, apart from a brief trip to Sliabh Liag as a teenager.  Many people speak of the wild beauty of Donegal.  Well if you’re looking for wild beauty in Donegal, you won’t find it along the WAW.  All you will see is mile after mile of bungalow blight. It was so bad, I couldn’t bear to photograph it, so you will have to take my word for it.

To find the wild beauty, you need a great Airbnb host like ours, who will direct you away from the beaten path and into the back end of nowhere.  Where you might be lucky and see golden eagles circling overhead.  Like us 😀

The back of Glenveagh National Park

So Rudy in Kincasslagh saved Donegal for us… but also, Sliabh Liag, one of Europe’s tallest sea cliffs is very VERY impressive.  Best to park in the car park and walk up the steep, steep road.  It somehow makes the cliffs more impressive.  For those who can’t walk, there is a small parking area at the top.  Bear that in mind!

After a second night in Kincasslagh, we drove on to Achill Island.  A friend described it as “Like Ireland, in miniature.”  I’d go one further and say it’s like Ireland, thirty years ago, in miniature.  The sun was splitting the stones as we arrived, the sea sparkled all around us, a steep mountain rose up to our right, with sheep grazing the long acre as we drove along, barely a white bungalow in sight… had we found heaven?

A beach on Achill Island

We arrived at our guest house, the Bervie, to be greeted as if we were old friends by the owner, Liz.  Our clean and cosy room overlooked the beach, which was maybe thirty metres away.  We ate like kings in the Bervie restaurant.  Unlike any other place we’d been, the atmosphere is so intimate that guests rapidly become friends and we talked nonsense into the evenings with other visitors… Heaven indeed.

The Bervie Guesthouse, on a misty day

We deferred our plans to visit Connemara and Galway and booked an extra two nights in the Bervie.  And even that was not enough… we’ll be back!