How an internet friendship can be a real thing.

Pastel paintings are notoriously fragile.  The thought of that ****ing scarf being damaged terrified me.  If I had to do it all again, would I succeed? Eeeek!  I started looking at shipping possibilities somewhat nervously.

Plan A was that Rodney would fly back to the US in April with my friend John (hi John!) who would then mail him to Katherine.  It seemed safe enough.  Rodney would be in a hard-shell suitcase, well protected by special cardboard packaging.  But he would still have a couple of days of being thrown around by the USPS inside his cardboard box.  It still seemed safer (and cheaper) than

Plan B – post him from France to Alabama.  Over a week of being thrown around by various shipping services… Seemed too risky.  And probably very expensive.

Plan A was looking good until John told me that he was delaying his return by a month.  Oh no… Katherine had been very patient, but another month of waiting was a lot to ask.  I started looking at how much it would cost to post Rodney direct from Provence to Alabama and was pleasantly surprised to learn that it would cost only €16 to post the picture plus cardboard packaging.  Plan B started to look good once again, but then both Katherine and I began to have doubts about how well he would cope with transport.  Imagine all of that carefully applied pastel pigment being shaken off and transferred to the surrounding packaging – it did not bear thinking about.

Plan C was born – frame the picture, put the whole lot into sturdy cardboard packaging and send it off.  I had just acquired a cheap second-hand frame, which should protect the picture; the packaging should protect the frame.  If anything got damaged, it would most likely be the frame.  It would be more expensive than plan B as the weight would go up significantly. I worked out an estimate on-line and was once again pleasantly surprised – the postage was still less than €25 and that it would take only 5 working days to arrive.

I messaged Katherine on Facebook with the happy news.  Long, detailed, cheery messages were being winged back and forth across the ether, when I thought, Hey, why don’t we do a video call?  I’m an avid user of Skype, Whatsapp and Facebook for making phonecalls, they are great for keeping in touch with my scattered family; voice and video quality are really good these days so I thought, why not give it a try?  I’d never heard Katherine’s voice; she’s never heard mine.

After some hesitation (something about a hairbrush…) and one failed attempt (a Linux machine that didn’t want to give FB permission to access the microphone or camera) we connected via the wonder of modern day mobile phones.  And we had a great, wide-ranging chat.  “Of shoes and ships and sealing wax, of cabbages and kings” sort of thing.

And I think I can now say, Yes. We are friends.  An internet friendship CAN be a real thing.  And a blogger meet-up, virtual or real, can help accomplish this kind of thing. 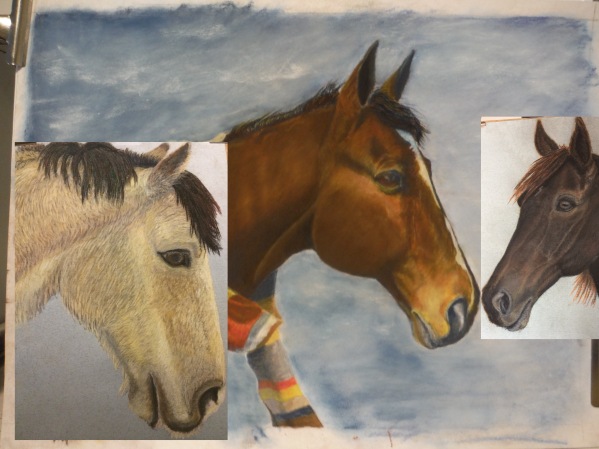 The final question was, would Rodney survive his journey?

Ten days passed with no news from Alabama.  I was beginning to worry and on Wednesday last week I decided to follow the tracking number and see where the package was.  But life is kinda busy around here and I didn’t have time to do it that day.  That night, I was out with friends in a local cafe (for the music, not for the wine!) when my phone pinged!

And did he survive?

Well, the box took some damage : 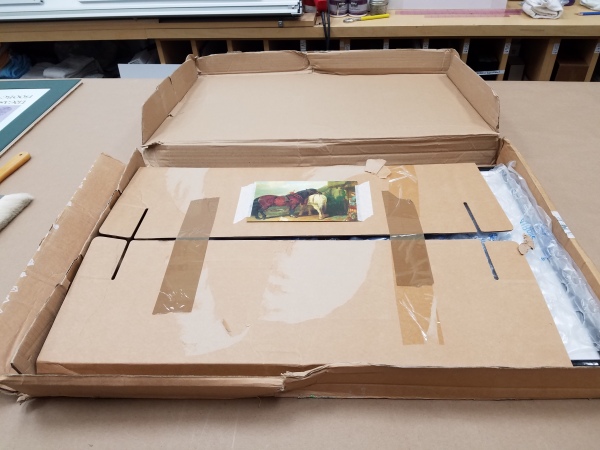 But Rodney is looking good. 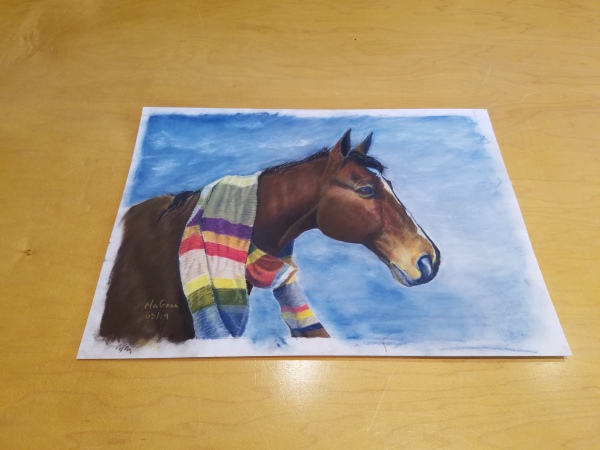 (I love this – Katherine didn’t even open the box at home – she took the whole lot straight to the framer’s for fear of damaging the pastel.  It’s nice to know that someone respects my work!)

I can’t wait to see how Rodney looks all framed up and hanging on a wall.