After reading Dream of Fair Horses, talking to Jane Badger and discovering that Pony Books are a recognised genre, I decided to shake off the shackles of shame that still hovered over my hands every time I browsed through a shelf of pony books.

I know where it’s coming from. I vividly remember an incident in my teen years when a friend remarked “You’re not still reading THOSE are you?”, her nose wrinkling disgustedly as she said the word ‘those”, when she saw me with a pony book. It was probably a Jill book, I loved those. Or maybe A Day to go Hunting which was the last pony book that I bought for many, many years. Whichever book it was, her words cut me to the quick, causing me to feel guilty any time I picked one of my old friends off the bookshelf for a comfy read, and leading to me passing most of my books on to a neighbour’s pony-mad daughters before I left home for university.

Why does learning that these books are a recognised genre make a difference to me? I think it’s the realisation that other adults read them too. After all, many of us (mostly) respectable adults read the Harry Potter books at the same time as our teenage children, and they were most definitely teen/fantasy fiction. Adult science fiction/fantasy can be pretty unrealistic too… never mind comic books, or whatever the politically correct name for them is… but as recognised genres, their readers are considered peculiar or nerdy at worst. They’re certainly not sneered at by their contemporaries!

Thanks to the wonder that is Kindle, I’d found a few example of equine fiction in an adult setting. Laura Crum‘s Gail McCarthy mystery series, for example.

Gail is an equine vet who, rather like Jessica Fletcher from Murder she Wrote, keeps finding herself embroiled in one mystery after another. They’re good books, Laura’s equine knowledge is spot on, even if the horses do remain as a background to the story, but you’ve got to suspend disbelief in order to accept that one woman can get herself into so many scrapes, and all while working full-time as a vet! But, despite that, I’d highly recommend these books, I enjoyed them very much.

In the spring of this year, I found a new series on Amazon, the Defining Gravity series, by Genevieve McKay. 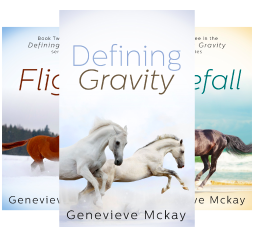 I bought the first one because it had good reviews, but I hadn’t realised it was full-on teen horse fiction. Still, it was well-written, current and touched on some pretty serious issues. Astrid is fifteen, overweight, and bullied and cowed by her domineering father. She’s completely unhorsey but has an astounding talent for archery. A rare moment of teenage high spirits on her part unfolds a chain of events which lead to her working in a local dressage barn. The horsiness begins there…

I actually devoured these books, buying the last one as soon as it was released. They follow Astrid for a couple of years as she grows up and navigates her way to adulthood. Once again, the horsey side of things is 100% solid and, to my mind, provides a good glimpse into the young dressage rider’s world. Perhaps the storyline in the last book, Riding Above Air, is a little weaker, but it’s still very readable.

It was after reading Defining Gravity that I spoke with Jane Badger and realised that I’m not alone in my choice of reading material. There are lots of us out there! And, thanks to Jane, there are more and more of our old favourites being republished!

My Friend Flicka and Thunderhead, and I’m about a quarter way through The Green Grass of Wyoming. I bought these second hand on Amazon, they’re cheap and easy to come by. In my opinion, Flicka was the best of this series. I remembered not enjoying Thunderhead so much as a child. It turns out I wasn’t wrong, I still find that it drags.

Jane Badger’s Jill fan-fiction novel, Jill and the Lost Ponies. If you liked the Jill books, you will love it. She absolutely captures the essence of Ruby Ferguson’s heroine. And it finishes the Jill story so much better than Pony Jobs for Jill ever did! Available on Kindle only.

The rest of the books mentioned below were all bought for my Kindle, and were re-published for Kindle by Jane Badger Books.  You can download these from Amazon.com, if you type in the author’s name or the book title, you should find them easily.

Caroline Akrill’s Showring series. I have to be honest here and say Nah, these books didn’t do it for me. I think a lot of my problem was the ‘posh’ English being used throughout. Or perhaps the fact that I’m a little bit biased against the whole idea of showing.

The Horse from the Black Loch by Patricia Leitch. This is a strange story where the supernatural meets the real world with no attempt at explanation – we must simply accept that there are mysteries in this world that will never be understood.  It’s a good read, it gallops along as a well-paced children’s adventure story rather than a full-on pony book.

My rating – 4/5 with the caveat that it’s more adventure than horsiness!

Josephine Pullein-Thompson’s Noel and Henry books; Six Ponies, Pony Club Team and The Radney Riding Club. This series follow the lives of a memorable cast of teenage characters over the course of a couple of summers.  Good fun, realistic characters and genuine horsiness throughout.

I’m also half-way through Jane’s book, Heroines on Horseback, which is an in-depth study of the pony book as a genre, starting at the very beginning with Black Beauty and working up to the 1970s. It’s an academic read and not something I want to devour in one sitting. What I find is that most chapters evoke memories which have long been buried in my mind. It’s great as a trip down Nostalgia Lane, and it reaffirms my new-found determination to be unashamed by my choice of reading material. Ever again.

One final remark – there is a little part of me that is wondering if reading these old favourites is helping me to compensate for the fact that I’m no longer riding. I no longer pony-mad and pony-less, but there are times I long to be able to stomp through the woods with Flurry, my little bulldozer.