It’s been a busy week, with visitors, unpacking, emergency vet visits and hospital visits (not me).  Every day, I said “I will ride Flurry tomorrow and lunge Aero to see how he looks.” Every day, something came up and Flurry remained unridden, Aero remained unlunged.

I was determined to do stuff with them on Friday.  While I was skipping out the paddock on Friday morning, I watched Aero moving around for a good while.  He looked ok walking, but at one point himself and Lilly had a little trot around and he was definitely lame – not hopping, but definitely lame.  I was pretty disheartened – this has been going on for weeks now.  I was back to thinking X-rays and serious veterinary investigations.

I was filling the water trough a little later on, and Aero came over for a chat.  I glanced down at the offending foot – what was that?

Goop running down from the coronary band near the heel – yippee!

I was now happy that it was indeed “just an abscess” and not navicular or some other horrible foot issue.  The abscess had finally burst, and now I had to to my level best to get as much pus out of his hoof as possible.  Forget about riding plans, it was time for some hot-tubbing, so the red bucket was filled with hot water and Epsom salts and Aero and I spent some quality time standing in the sun, while the stray pup (now named Dylan) lay in the shade of the old trailer and watched us.  I am his universe, he can’t bear to leave my side, which is very sweet, but given his complete lack of horse sense and general ungainliness, he’s something of a liability around the horses.  Peace reigned, though, Aero was his usual tolerant self, and Dylan was content to lie still so long as I didn’t wander off.

Once I had finished hot-tubbing, I studied Aero’s hoof.  There’s a disturbing fissure in the wall of his hoof on the side where the infection came out.  It runs from the sole upwards, and almost looks as if someone was trying to saw a piece off. 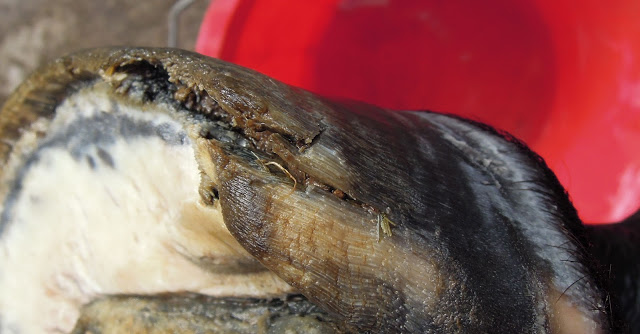 I suspect that ultimately, a large chunk of wall will shear off here, presumably due to the abscess.

I put a poultice on the back of Aero’s foot, wrapped it up and put one of the Cavallo Sport boots on to protect it.  I was going to bring Pepper in to keep Aero company overnight, but Flurry volunteered for companion duty – he came straight up to me when I went down to the paddock!  The two boys settled well, there was very little calling back and forth to Pepper and Lilly in the paddock overnight.

In the morning, there was a small amount of black pus on the poultice – I’d have been happier with more!  Anja had advised using Clean Trax to completely disinfect his hoof now that there was a small opening on it, so Aero got to stand in the stable for an hour, with a big blue bag on his leg, but first, I finally got to ride Flurry!  OMG, I was stiff!  OMG, he was stiff too – or maybe my stiffness was reflected in him.  I rode for about 45 minutes – it’s a start!

Then it was Clean Trax time. 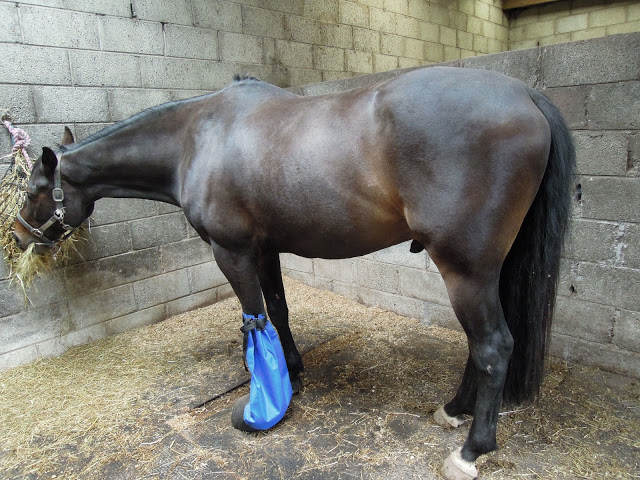 Flurry was very curious at first,

and made faces at the smell

but he eventually got bored and stopped watching.

Finally, we were finished and both boys could go out again.  Aero possibly looked a little less lame as he trotted off – I have my fingers crossed that this is the beginning of the end of the foot saga, but I suspect that fissure is going to cause some trouble.