It seems that Spring is just about here, so maybe it’s time to write about the Provençal Winter.

This wasn’t our first winter in Provençe, we were here from the end of December to the beginning of April last year, during which we experienced the coldest spell the area has endured for years.  For three weeks, the temperature didn’t rise above 0°C, and for almost a week of that it didn’t even make it above -7°C.  What we didn’t realise at the time, though, was that last Winter was quite dry.  This year, we weren’t expecting another intense cold spell like last year, but we didn’t expect it to be quite as wet or as snowy as it has been.

Mud has been a constant in my life since the end of November.  I actually thought the horses were dirty when I took these photos.  Little did I know what lay ahead of me. 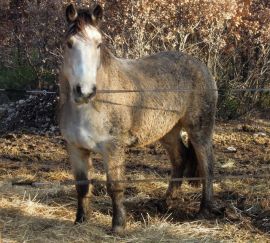 By the beginning of February, Flurry regularly looked like this :

inspiring what turned out to be the most popular post I’ve ever written!

Aero’s speciality is the rasta look. 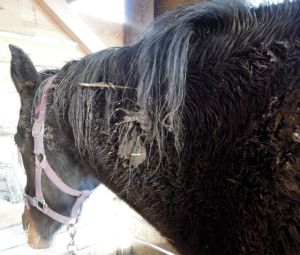 and I’ve spent many happy (?) hours chipping mud bobbles out of his mane.

There are time when the local trails are so muddy I even hesitate to walk the dogs on them.  It’s a thick, cloying kind of clay which adheres to everything it comes in contact with – the sort that clings to your boots and quickly adds a kilo to the weight of each leg as you slip and slide through the woods.  A couple of times, Cinnamon and Cookie have come home wearing mud-clogs which doubled the size of their little paws, and with mud-plastered bellies – the only solution was a bath, much to their delight (not!).

The mud makes me reluctant to ride as well.  It’s the one downside of using hoofboots.  First of all, you need to get the hoof de-mudded.  Then you need to make sure that the heel bulbs are scrupulously clean so there is no risk of irritation when the close-fitting boots are in place.  After spending 45 minutes de-mudding all four hooves and scraping enough muck off the horse to make him rideable, you ride out.  Then you have to spend another 25 minutes cleaning the muck off your boots when you get back.
Is it any wonder I haven’t been riding much?

There is a family (mum and daughter) who keep a yearling at the farm.  Early on in the Winter, there was a day of rain which led to a gigantic puddle appearing near the stables.  This was such a rarity that they came out especially for a couple of days to lead the yearling through the water.
It’s not a rarity anymore.

That’s actually a walkway down to the stables

There’s a track leading up to the paddock where Flurry and Aero live.  When I’m paying a flying visit, just to say hello, dispense carrots or pick out feet, I drive the jeep up to them.  There have been days when the track is so thickly coated with a layer of sludge that I literally waltz along it.  This would be hilarious if I was a seventeen year old boy, but I’m a fifty year old woman and all I see are the looming tree trunks and fence posts.  It’s not funny at all!

Then there was the snow. 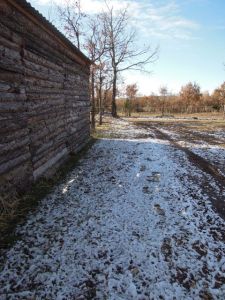 Late in November, there was a sprinkle of snow overnight.  I got quite excited about it and I made sure I got a photo of a small patch of white in the shade of one of the field shelters.  Little did I know, folks, little did I know…

Snowfall is not an everyday occurrence here.  We could see that last year, in the way that the locals reacted to the one fall of snow we had.  It was just like being in Ireland, everyone was ooh-ing and aah-ing about how pretty it was for the first two days but got a bit fed up with it after that.  I’ve lost count of how many times it’s snowed this year.  Proper snow – not like the little sprinkle in this photo.

When we had the first Proper fall of snow, it was very exciting and I rushed out to take photos. 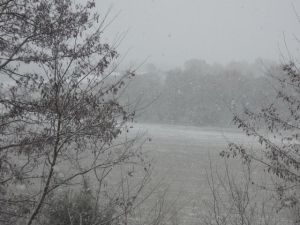 The view from our house 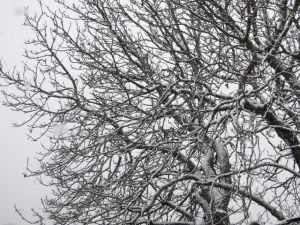 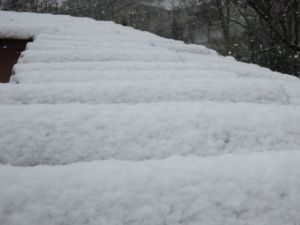 That snow didn’t stay long, so the next time, I got a bit excited again and went out and played with the dogs in it and took loads more photos.

Snowbound car (he managed to get it out!)

The view of the Alps that day

It was really pretty up at the farm.

Icicles on the Abri 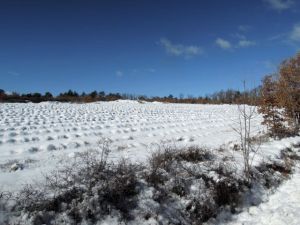 To be honest, the snow was fun and I’m not going to moan about it.  We got out and enjoyed it a lot.

Out and about in the snow!

Last year, I was nursing a broken wrist when it snowed and I was absolutely petrified I would fall and hurt it some more.  I hobbled around in the snow like a nervous old lady, clutching the arm of whoever was close to me.  I’m happy to report that I was much more like myself this year.  And yeah, I did fall on my butt a couple of times but at least I was sensible enough not to put a hand out to save myself! 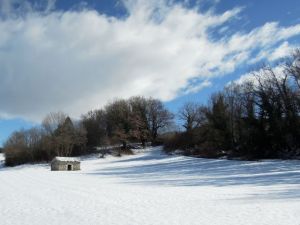 Montbrun les Bains in the snow

Some of the farm’s smaller inmates decided to look very cute in the snow.

And this is Caline, his best little girl-buddy. 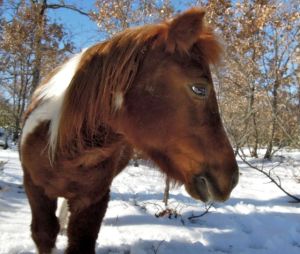 (I may have spelled their names wrong.  Grisou means “the grey one” and Caline means “soft and fluffy” as far as I can make out.)|

But it hasn’t all been rain and snow.  There have been some good rides on sunny days..

and great walks in the mountains with the dogs… 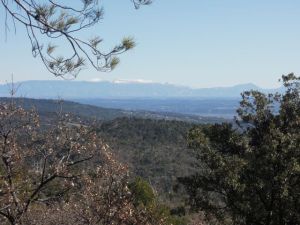 When I saw this little guy sticking its head out through the leaf mulch in the woods in early February, it was a sure sign that Spring is on its way – although it proceeded to snow heavily again the next day! 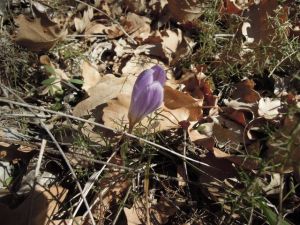 But Spring is definitely en route now.  Fruit trees are ready to explode into bloom.

There are flowers popping up everywhere. 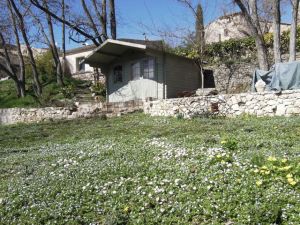 Insects and lizards are waking up from their winter slumber. 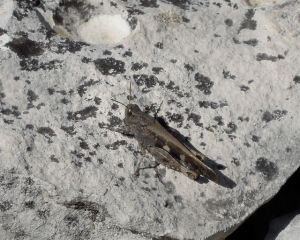 I haven’t been quick enough to get a photo of a lizard, but they make for a great new Hyper-terrier game.

The Holm oak trees are finally shedding their dead leaves

as the new growth pushes through.

After all the rain, every ditch, drain, river and stream  is full. 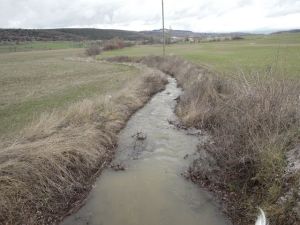 It’s been a long, wet Winter, but I think we are going to have a very green Spring.

PS Click on any photo to see a larger version of it.