Our original plan for the trip to La Fiaba was to take part in a two-day Transumanza (cattle drive) on Saturday and Sunday, but due to the exceptionally wet winter and late spring the region has been enduring, the Transumanza had to be cancelled.  The ground is soggy everywhere, so no animals are out grazing yet, so the horses and cattle have not yet met each other, and apparently it’s very important that they’re on first name terms before the horses start to make demands on their bovine buddies, such as “Git along little dogie” or “Keep movin’ moovin’ moovin.'”

We decided to come for the Easter weekend anyway, as we were both really looking forward to the break, but the weather definitely let us down!  So when we saw that Monday’s forecast was pretty good, we arranged to stay an extra day – one of the few advantages of the LSH losing his job is that there was no pressure to be back for work on Tuesday morning!

Through the Ears of a half-Haffie!

Monday morning saw us present ourselves once again at the yard and head out for another trek, with Sharon absolutely determined to take us on one of her favourite rides, up to the deserted village of Vignale.  I think she was a little disappointed to hear that the LSH and I had walked there the previous evening, but for me, the most important part of a trek is the journey, not the destination, so she needn’t have worried!

It was a lovely ride, there were two young ladies out with us as well, one of them on La Fiaba’s resident Halfinger and the other mounted on the ultra-steady Irish cob Lubie.  I was on Blondina once again – I was getting quite fond of her by now – and the LSH was back on Pancho.

The LSH and Pancho leaving the deserted village

We rode through olive groves

over hills and valleys 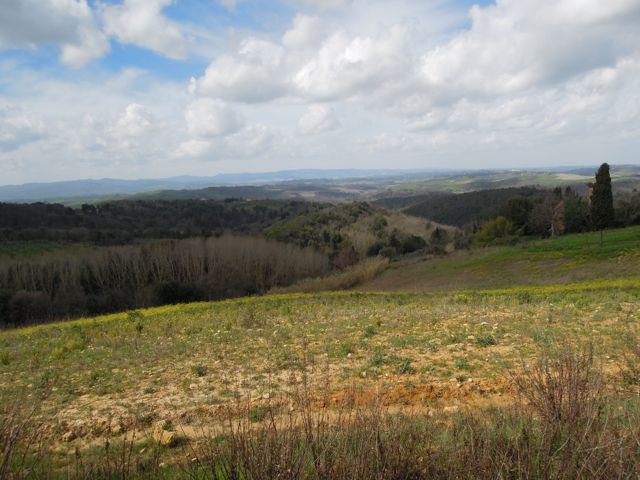 and past another less pleasant sight – I guess this little guy died in the torrential rain over the weekend.  He must have been too small for Easter lunch…

The horses enjoyed a picnic at Vignale… 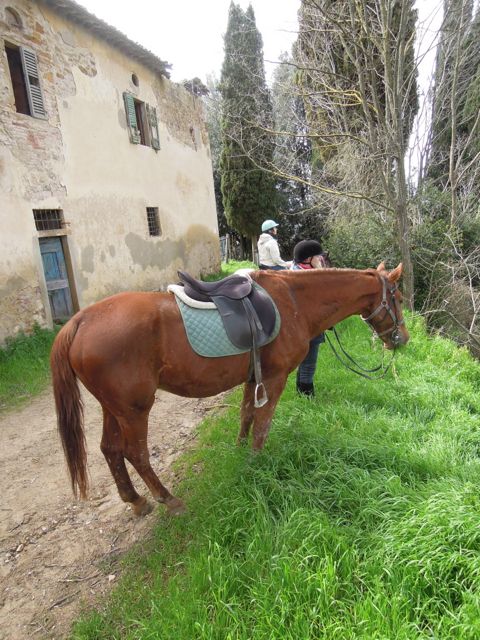 …but moved on readily when asked.

It was a lovely last ride in Tuscany, very relaxed and low key and especially enjoyable because the sun came out to play.

Poor LSH had been fighting off a Javanese Lurgy introduced to Europe by The Bro, so he took to his bed for a while afterwards, with Nurse Cookie looking after him!

(I won’t be thanked for posting that!!)

But once the batteries were recharged, we went off exploring again and visited the nearby city of Volterra. Here’s a few photos (just to boost the Cultcher Levels of this blog).

Ruins of a Roman amphitheatre just outside of the town 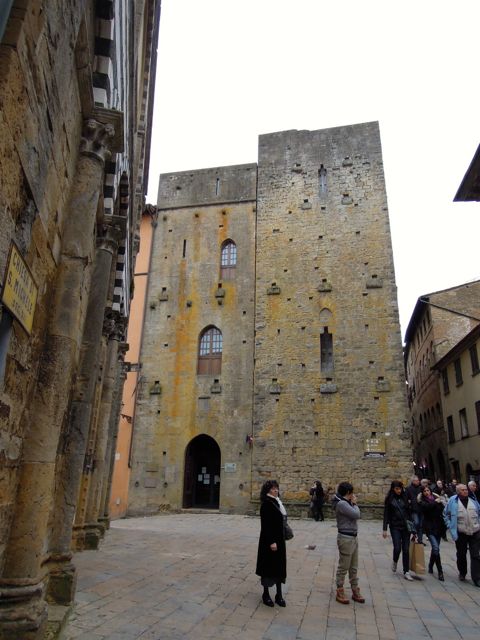 View of Volterra skyline from the ruins of the Roman forum

By six pm it was starting to rain once again (and we were both feeling a tad fatigued) so we headed back to Soiano for our last night.

Besides the riding, what were my overall impressions of the trip?

First of all, Tuscany’s landscape reminded me a lot of the rolling hills of Northern California, but whereas the Californian hills are bare and green, you really get the feeling that this region has been cultivated for centuries.  Olive groves, orchards and vineyards are everywhere you turn, terraced into the hillsides or nestling in the green valleys below.  Some of the olive trees look truly ancient, with massive, gnarled trunks, and many of the dormant vines we saw marching in lines across the landscape looked ancient as well – twisted, ugly little stumps that you’d never dream could produce fruit.

Green-ness was another overwhelming impression – the fields and valleys are lush, verdant and a bit wet looking – a lot like Ireland in May, actually – but this may be a false impression, as a result of the heavy recent rainfall.

Where we live in the Luberon region has a wild feel to it – there’s oak woods all over the hills, interrupted occasionally with fields of lavender or other herbs, and only the valleys show any truly lush greenery.  While there are little ancient villages scattered around all over the place here, Tuscany struck me as more ancient – you really get the feeling that this area has been civilised for eons, with Etruscan ruins mingling with Roman remains in the middle of medieval cities.

There are deserted villages and farmhouses scattered all over the place, too – not something we’ve seen much of in Provençe.

The accommodation was not what we expected – I was expecting a set-up like the French Gîtes Équestres, where there would be a couple of apartments attached to the yard.  Instead, we were lodged in a Hazienda Agriturismo a couple of km away, on full board – much more luxurious than either of us expected!  We received a warm welcome from our hosts (as well as from Sharon and Lorenzo, of course) and I’d readily go back any day.

In fact, we’d both like to go back just to explore the region a bit more.