Thank Friday its the YD’s Birthday!

The YD’s employers, La Pastorale in Céreste, very kindly gave her the evening off so she could enjoy her birthday.  She didn’t want to go out, though, she wanted her favourite dinner – Aubergine Parmigiani – at home.

Aubergines, tinned tomatoes, mozzarella and parmesan were purchased and assembled into this :

and served with garlic bread.  So tasty… I should have made more…

If you’re interested, the recipe is here on the Wanderly Wagons blog, scroll all the way down, it’s the second last thing on the page. 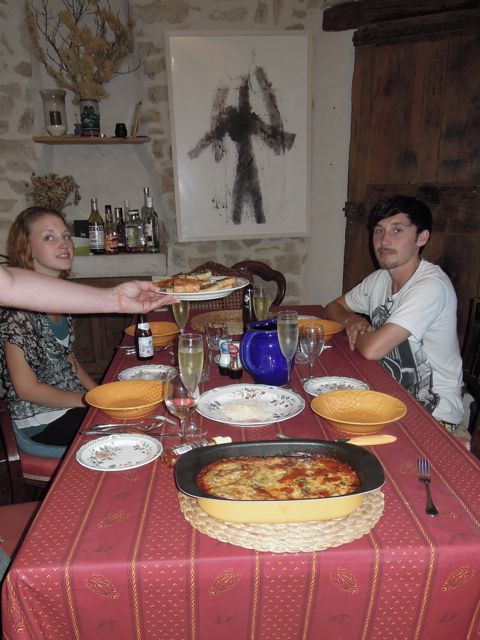 The print on the wall is a self portrait by the ED, so it’s like she was with us at the table!

Then there was dessert to consider.  It’s just coming into peach and nectarine season (droooool!) and Someone had left a tray of eighteen nectarines on our doorstep….. Flambéed Nectarines, we said!

How to Make Flambéed Nectarines on your Birthday

First slice up your nectarines, and if you have any other fruit that’s about to go off, throw it in, too.  We added plums.

Melt 3tbsp butter and 2tbsp sugar in a wide pan over a medium heat, stir until sugar dissolves.

Add a slosh of orange juice and the juice of half a lime if you have it.

Chuck in the fruit and cook for a few minutes.

Lob a good measure of rum into the pan.

Light a match, throw it into the pan from a distance and watch as it is extinguished.  Fish it out. 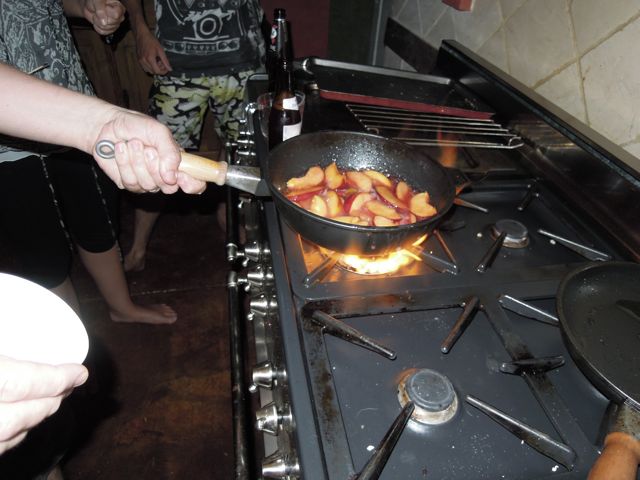 Light another match.  Curse, shake it out and throw away the two broken halves.

Repeatedly attempt to light a third match, the last in the box.  Scream “WHY WON’T IT LIGHT??”

Relight slightly damp first match from gas ring.  Bravely hold it over the pan.  Nothing.

Decide that all the alcohol has boiled off.  Prepare to throw another good measure of rum into the pan.  Stand back as Dad (aka the LSH aka the Long Suffering Husband) takes over, keen to prevent any further misuse of his Bacardi.  Watch as he lashes the rum into the pan and with a twist of his hand, angles the pan so it ignites from the gas ring. 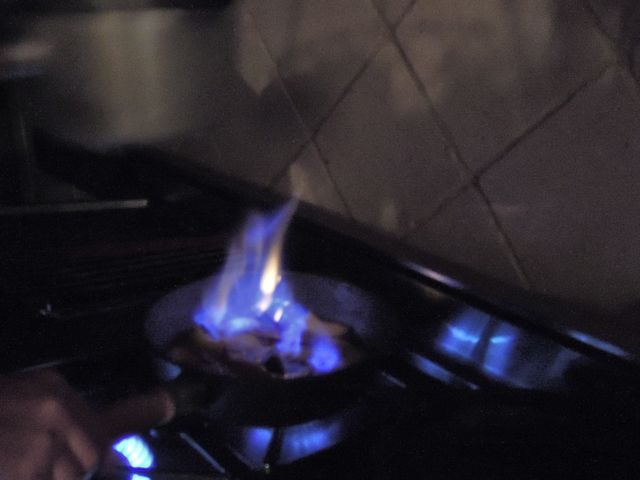 Brilliant.  He should have been a chef.

and no, it’s not like candles, she didn’t have to blow it out!