Countdown to our FFE debut

Some answers to previous questions :

Sunday’s test is definitely in a 20×40 arena.  How do you ride a 20×60 test in a 20×40 arena?  Well it’s got all the same markers so it’s quite straightforward, apparently.  Yes, over here, even the small arena has all those confusing extra letters.  Ok.  No Worries.  Really.

Those of a sensitive disposition can look away now… the ridgey stuff up Aero’s doodah was indeed something unpleasant.  It’s been soaking in Dermagel for a couple of days now and I had a good fumble Up There today and took LOADS AND LOADS of Guck out.  He’s clearly not sore Up There now; there was no stamping and he even um… relaxed… a bit while I was at work.  So now I can bask in the happy glow of knowing that both of my horses are clean inside and out.

Yesterday, I allowed myself to be snowed off.  It snowed a fair bit early in the morning but had cleared by 11.  I probably could have ridden but it was icky.  I did go to yoga, which was frankly boring; too much chanting and meditating and not enough stretching and bending.  Leah, maybe you were right…

Today’s work in preparation for Sunday was focused on Aero.  The horse I’m not taking.  Well, I hadn’t done anything with him since Saturday and I wanted to play with him… so he had a good grooming session, then we did some travail sur sol in the round pen, after which I threw the trail saddle on him and we went for a 30 minute loop through the woods.  When I stopped to pull out my camera, he was convinced there were carrots on the way.

Ah well, I couldn’t disappoint him now, could I?  Here’s the Through the Ears shot of the snowy trail :

Quite rideable, really.  It probably was yesterday too.  But it was COLD yesterday!

He picked up a stone on the way and of course I hadn’t put a hoof pick in the saddle bags  – we were only going out for 30 minutes, why would I?  I dismounted and found a sturdy stick to dislodge the offending article and we continued on our way, but I have to confess he didn’t feel right in walk.  He was fine in trot, but irregular in walk?  Hope nothing is brewing…

By the time I finished fluting around (Literally.  See above) with Aero, it was after four.  I brought him back to the paddock with every intention of going straight home afterwards, but I somehow found myself leading Flurry back up to the yard.  How did that happen?  I don’t know who was more puzzled, me or Flurry!

Anyway, I rode Flurry for about 40 minutes, mostly in walk because I didn’t want him to sweat up so late in the day.  We worked on bendy stuff and leg-yielding.  Yeah.  He was grand; nothing special; just my sweet little dun horse.  I do ♥ him!  Turned him back out in the paddock just as it was getting dark and headed home.

Oh yeah, and Aero decided to pose for me while I was giving him a pick of grass : 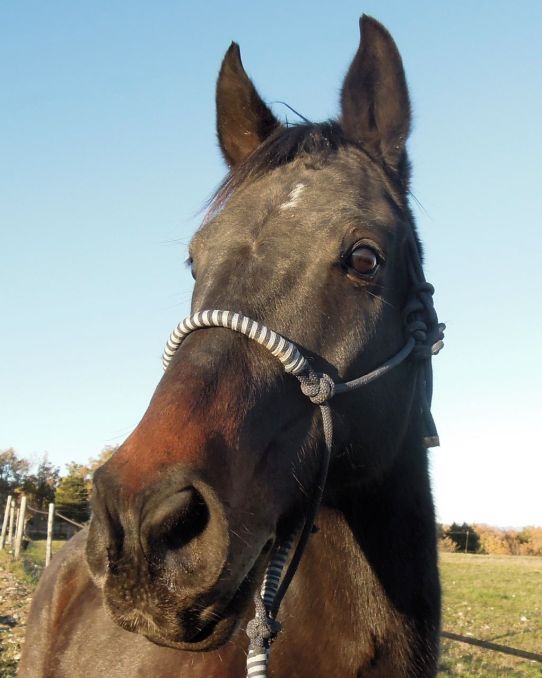 That seems about right.