In between scouring the internet for videos I can use for my GET INTO THE CHRISTMAS SPIRIT series (why oh why did I think it was a good idea?) I’ve been doing my usual stuff, riding the horses, walking the dogs.

This weeks lesson was spent with Aero, doing the equitation ethologique stuff.  Alexandrine picked me up on a few things I was doing wrong, which helped improve my “release” timing and she showed me another couple of exercises to do.  Aero is starting to anticipate, so I have to pause every so often and just do nothing, reward him for standing still and then carry on.  We’ve also started on lateral work which is interesting – he’s pretty cool going from left to right but quite anxious going from right to left.  Like all things equine, it’s a work in progress and will improve in time.  He is so responsive and quick to learn that it’s easy to want to spend more time at this with him, but I still try to vary his work by trekking and doing ridden arena stuff too.  It’s the same with Flurry, it’s so easy just to trek with him that I need to remind myself to do arena and in-hand work – which he needs, because his responses are soooo sluggish compared to Aero!

Flurry and I had one of our super-duper treks during the week – the sort where I ride along with an inane grin on my face from start to finish.

The plan was to meet MC in Reillanne, so we set off, passing Aero and Mou-Mou along the way.

It’s one of our regular routes – after passing the horses, we go down a steep slope…

…to the dry stream bed…

and then up again on the other side.

After that, we cross an open area, where Alexandrine’s father has been chopping trees.

(Confession time – those first few pictures were taken back in October!  Astute observers will notice that Flurry’s Ear Cosy disappears…)

After the open bit, we pass along a driveway, before we enter the Field of Clear Thinking (Clary Sage).  The plants are dormant now – are they dreaming lucid dreams?

We crossed the Fields of Restful Slumber, neatly trimmed after their summer haircut. 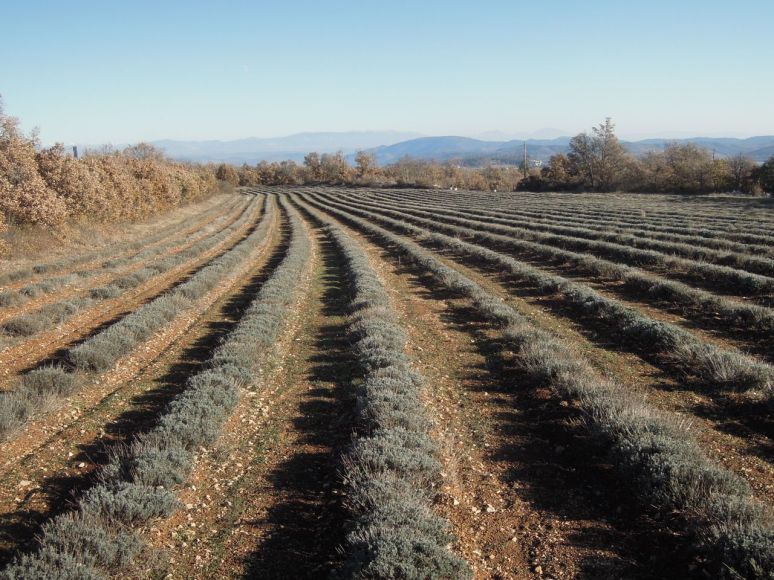 It was a gorgeous day, it must have been about 13 or 14 C in the sun, but there was still frost to be seen in any patches of shade.

After the Fields of Restful Slumber, the trail passes through more woodland, weaving back and forth through the trees.  See those happy ears in the photo?  That’s what was in front of me the whole way.

…before it finally emerges into suburbia! 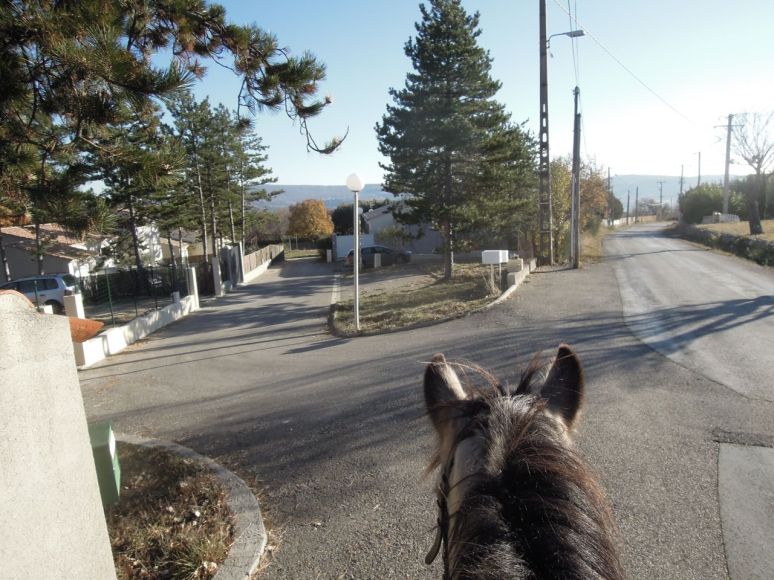 Flurry and I stopped for a Selfie…

…just before we met a pair of very excited young horses.  So excited and, in fact, so exciting, that I felt I’d better leave the camera in my pocket for a while.

MC and Quieto were waiting for us just around the corner and we set off on a different route home through the woods.

Not without incident.  We spooked a deer as we climbed part of the hill.  I saw its little face looking at us, aghast, before it turned and showed me its little tail!  We also took one or two wrong turns.  It was a very complicated route home even before we went wrong, so I’m quite sure I won’t remember it again.

MC and I parted company near the top of the hill.  Flurry and I continued upwards and she and Quieto made their descent back to Reillanne.

As I rode along the trail, I was musing about what an idyllic ride it had been and feeling a bit sad that I will probably never have the same confidence in Aero as I have in Flurry, despite the progress we’ve made.  Suddenly, I felt Flurry tensing up.  He seemed to be looking anxiously into the trees on the left.  I patted his neck reassuringly – just as there was a loud SQWUAWRK and a large bird of prey erupted from the trees.  Buzzard? Eagle? I’m not sure which, I just knew that it was big and  brownish.  Funny thing was, once Flurry had seen it, he was fine.  “Oh, one of them.  Ok.”  What a horse.

I dismounted as we crossed the final lavender field so he could start cooling off – it had been a two and a half hour trek and he was pretty sweaty.  I led him out of the field and onto the road for the final hundred metres, and this is what we met.  Well not this one, exactly.  I nicked this off a recumbent bicycle review  at Spinning Bike Reviews.  The one I met also had a big flag sticking out of the back of it, adding to its scariness. 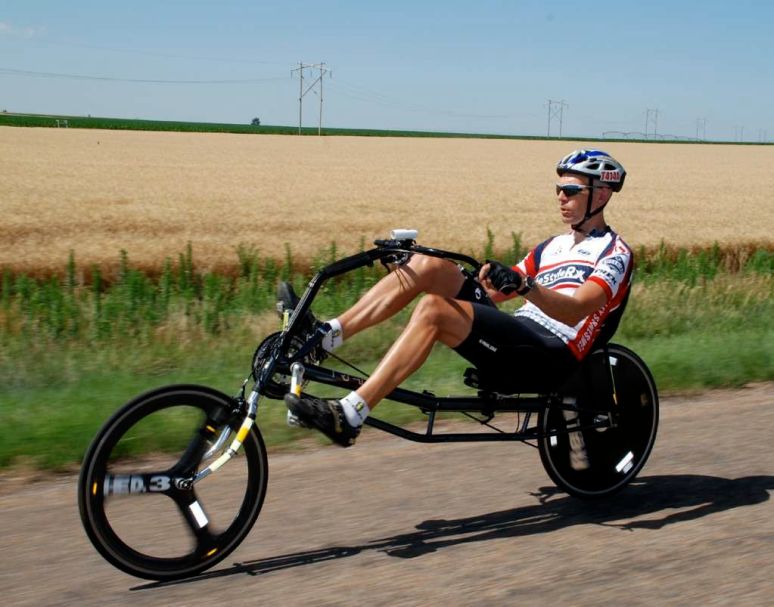 Flurry stood and stared, goggle-eyed.  The cyclist, gent that he is, stopped when he saw his reaction.  Flurry continued to stare for, oh, another five seconds.  Then he put his head down and started eating grass.  Panic over.  I thanked the cyclist and we strolled on by.