Seeing in the New Year in La Ciotat

Two of our friends recently bought a house and are in the middle of renovating it.  They originally thought that they could live in the house while work went on around them, but quickly realised the insanity of that particular notion and arranged to rent an apartment nearby.  Unfortunately, their apartment, while free for most of the winter season, was already booked for five days around New Years Eve.  Not to worry, they said, we’ll go to the coast, and they arranged to stay in a town called La Ciotat, just over an hour’s drive away.

Would we like to join them there for an afternoon, they asked.  Hey, we’ve got a better idea! we replied.  We’ll spend two days down there with you!

So yeah, we gate-crashed our friends’ holiday.  But they didn’t seem to mind.

I’d never heard of La Ciotat before.  The first thing I noticed as we arrived was a large topiary display in the middle of a roundabout.  It was in the shape of an old steam train.  Unusual, I thought, and dismissed it.  It was later in the day that I came to understand the significance of it…

Have you ever heard of the Lumiere brothers, Auguste and Louis?  No?  Me neither.  But it’s thanks to them that we’ve all spent many a rainy saturday at the movie theatre – they were the very first cinematographers.   One of their earliest movies was L’Arrivée d’un Train à  la Ciotat (the arrival of a train at la Ciotat)

Why La Ciotat, I wondered.  After all, the Lumière brothers hailed from Lyon.  It turns out that their family had a holiday home (more of a château, really) in La Ciotat for many, many years and they had strong connections to the area as a result.  Some of the earliest showings of their movies took place in La Ciotat, both in their château and in the local Eden Theatre, making the Eden Theatre the world’s first cinema.

The first ‘movie show’ ever was a presentation of ten of their fifty second movies, shown at the Salon Indien du Grand Café in Paris.  One of these was the first slapstick movie (also the first fictional movie), l’arrosuer arrosé (the sprinkler sprinkled), which was filmed in the garden of their château.

To the right of the Eden Theatre is a statue commemorating this movie :

Included in the first movie show at the Salon Indien was another piece of slapstick, involving a horse.  It’s called La Voltige.

La Ciotat is very proud of its links with the Lumière brothers.  There is a memorial to them along the seafront, as well as a museum (closed for the holidays, unfortunately) and the Eden Theatre itself (also closed. Sniff).

In front of the Eden Theatre is a large plaza, paved with decorative bricks which outline the frames of a strip of film.  I spotted an opportunity…

Lots of bloggers I follow use GIF files.  Truth be told, I hate them.  Maybe it’s an age thing.  But, thanks to the wonder of the digital world we live in, I made a GIF file of my very own.  I call it Cinematographer Cinematographé.

What would the Lumière brothers have made of GIF files, I wonder?

There’s loads more to write about our two days in La Ciotat.  There’s the Rose Thé hotel, sunset from les Cretes, New Year’s dinner at Les Embrun, a chance encounter with a very interesting man in a restaurant and, at the end of it all, a couple of very tired doggies. 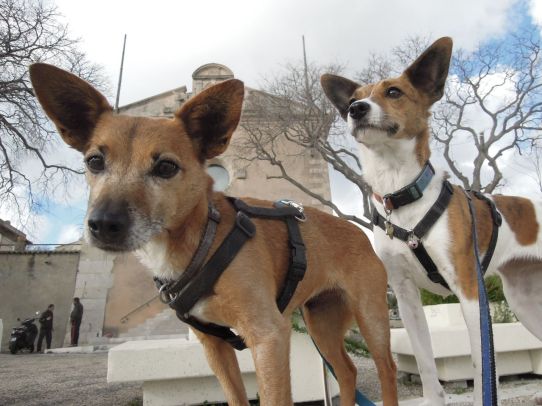