There are two images from 2013 that will be forever engraved in my brain. Between them, they epitomise the depths to which animal abuse has sunk in Ireland. One of them was this – a foal standing over its mother’s body in Wicklow town.

The mare had refused to back out of a trailer, so her handlers left the ramp down and shot forward at speed, causing the mare to tumble out the open ramp. She lay on the road, unable to rise. It turned out she had two broken legs – no wonder she couldn’t get up. Did her handlers call a vet? No, they kicked and beat her, trying to force her up, eventually driving away, leaving her helpless on the road in the middle of a housing estate. The Gardai (police) and a vet were called and the mare was put to sleep. Rumour has it that witnesses are reluctant to come forward due to intimidation – I’m guessing that no-one will ever be charged with this crime.

The other image is this – a dog.

But this is no ordinary dog. This is a dog whose resilience and determination to live has earned him a place as the Poster Boy of Irish animal protection organisations. Meet Fionn, named after the legendary Irish warrior, Fionn MacCumhail.

The first I heard of Fionn was when I saw the above photo on a Facebook Event invitation from a long-time Cork friend, Oonagh. My heart just about cracked in two when I saw the shattered body and that defeated face and I started doing everything I could to learn about his story. The more I learned, the more coincidences I found – and the more I realised that I absolutely had to write this post.

Fionn was found a couple of days before Christmas, as near to death as any creature can be, buried in a heap of rubbish in the middle of a small wood just outside of Cork city. A woman was walking her dog through the woods and her dog sniffed out Fionn. The woman went to see what had caught her dog’s attention. All she could see was Fionn’s ears, sticking out of the rubbish heap, so deeply was he buried. She immediately called Cork Dog Action Welfare Group (DAWG), who sent someone out to investigate. After some digging, they finally managed to unearth the dog and he was rushed away for veterinary treatment.

Emaciated, semi-conscious, covered in wounds and sores, and with a temperature way below normal – his prognosis was not good. He was given antibiotics, painkillers, IV fluids and wrapped up warm and cosy. If he survived the night, the vets would carry out more tests the next day. Who knows how long he had fought to live, thrown away like a piece of garbage, but now he had others fighting for him, too – the veterinary staff and the volunteers at DAWG. His picture and the story of his rescue was posted on their Facebook page, and prompted outrage amongst animal lovers all over the world.

One of the people who heard his story was moved to do something about it and she set about organising a charity walk in Fionn’s name, via Facebook. Coincidence No 1 : this was my friend Oonagh, who I’ve known since she was a schoolgirl!

Oonagh received a huge response to her Event, Charity Dog Walk for Fionn. Appalled by the litany of abuse stories coming to light, animal lovers all over Ireland (and from further afield, too) seem to be delighted to have the opportunity to come along and just walk for animal welfare. It’s a show of solidarity for these creatures who have no voice, who are dependent on us to look after them and to fight for them when they are mistreated. At the moment, there are almost 900 people signed up to take part in the walk on Sunday 26th Jan and I wouldn’t be at all surprised if they reach 1000. Well done Oonagh, and everyone who is taking part!

Fionn’s story continued to unfold over the next few days. He was clearly a type of hound and a tattoo on his ear revealed the identity of the club that owned him – Griffin United Harriers. In Cork, there are several small hunt clubs which keep hounds for hunting on foot or for drag-hunting competitions. Rather than keeping their hounds in kennels, they are farmed out to club members who feed, house and exercise them. Except, Fionn doesn’t look like he saw an awful lot of feed, does he?

Meanwhile, his wounds were cleaned and stitched up, he slowly started to eat again and totter around the Vet clinic. X-rays revealed a fractured skull, caused by a blow from a blunt instrument. A hammer? A hurley? A collision with a car? Who knows?

After a couple of days, he was well enough to go to a foster home and off he went, to spend his first Christmas as a family dog. All seemed well…

…and then he took a turn for the worse two days after Christmas. He seemed to have lost his vision and his coordination and he staggered around, confused and bewildered. Once again he was rushed to the vets, who quickly diagnosed swelling on the brain as a result of his fractured skull. Painkillers and anti-inflammatories were administered and Fionn’s legions of followers around the world held our breath, as we waited to hear if he survived the night.

And once again this plucky dog fought his way back from death’s door. Within days he was up on his feet again and starting to eat once more. But now there was an ominous cloud hanging over him. What was causing the swelling? Was the damage reparable or was Fionn condemned to a life a pain and confusion – in which case euthanasia would be the kindest thing.

DAWG pulled out all the stops for Fionn and arranged an MRI scan at a Dublin veterinary clinic. It was at this point that I decided to write this post, so I contacted J, a volunteer at DAWG, whose name Oonagh had given me. Her name didn’t ring any bells as I messaged her via Facebook, so I was surprised to receive a cheery “Hi Martine!” reply from her. It turned out that J had worked for our accountant in Cork several years ago and she remembered us well : coincidence no. 2! I told her that I wanted to write the story whatever the outcome of Fionn’s MRI. I felt that if I could do anything at all to highlight the animal abuse going on in our society, then I should do it. Anytime I had doubts about writing this, I just had to look at Fionn’s face in the very first picture and the doubts melted away. J had to check with the the board members of DAWG so that I would be allowed to use the photos – thankfully they said yes!

The next day, Fionn had his MRI scan. The results were not good. The blow to his head was so forceful that not only had his skull fractured, but one of the bony plates that make up the skull had shifted. This was what was causing the swelling. The choices were stark – euthanasia or high risk surgery.

His carers considered the horrors that Fionn had already endured – starvation, neglect, pain and abandonment. Would it be right to subject him to surgery and the inevitable post-op trauma and pain? Then they thought about how hard he had fought for his life ever since he had been dumped in the rubbish tip and they knew that they had to give him every possible chance to survive.

And survive he did. He’s back home with his foster family while he recovers from his surgery. His story has been told in all the Irish papers and he has appeared on the Irish TV News show.

He still has a long way to go before he fully recovers, but he has become a symbol of hope for animal rescue organisations across Ireland.

I want his story to galvanise the Irish public into action. It’s time to contact your elected representatives and say ENOUGH IS ENOUGH. It’s time for legislation which will introduce much more severe penalties for animal abuse; it’s time to enforce existing legislation about compulsory microchipping of equines.

What do I expect my readers to do?

If you’re in the South of Ireland, you can put your walking shoes on and head to Cork on Sunday 26th to attend the Charity Dog Walk for Fionn (details here)

You could donate to the fund which has been created for the walk, you can donate to oonaghobrien@hotmail.com via PayPal .

You could send an email to Griffin United Harriers (herlipe1@gmail.com), asking them to contribute towards Fionn’s veterinary bills (they haven’t. not a penny) or you could ask them to prosecute the people who treated Fionn so cruelly.

At the very least, you can send an email to info@agriculture.gov.ie urging them to review existing anti-cruelty legislation and to introduce harsher penalties for convicted abusers. 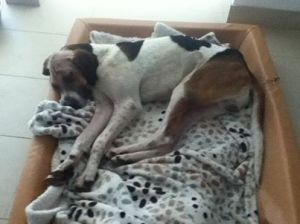 Oh yes. There was a third coincidence in this story. It turns out that the lady who found Fionn in the middle of the woods was also an old friend of mine – we bonded over our children more than twenty years ago. Kay, you were an angel sent into the woods that day to rescue Fionn. Let’s hope that his story will be the start of a change in attitude towards animal abuse in Ireland.