When my friend Sara, from Le Petit Village, moved here first, she filled her blog with funny stories about her quirky neighbours.  Since meeting her, I’ve heard a few of the stories that were too sensitive to publish.  Suffice to say, she has met a bunch of weird and wonderful people during her five years in Provence (she’s leaving next week, sniff!  But I’m sure she’ll have lots of interesting stories to tell as she & her French husband settle into the US).

Anyway, I was left wondering why I’m not meeting weird people.  Is there something wrong with me?  Do weird people shun me?  Am I so dumb that I don’t notice their weirdness?  Am I just lucky in that all the people I meet are nice and normal (mostly).  And then we moved into our quiet little lotissement on the edge of Céreste.

The first neighbours we met were Claude and his wife Joelle.  They’re lovely.  Not weird at all.

The neighbours on two sides are quiet and keep to themselves, but definitely not weird.

There’s Party Guy, who lives across and one down from us.  Being in your twenties and having lots of parties is totally normal, even if it’s really annoying for your neighbours.

But then, across and one up from us, there’s Crazy Tree-Chopping Man.  Finally.  A weird neighbour.  And I’ve actually known about this guy for two years, now.

This time two years ago, I was stomping about this area on foot, following my friends Anne and Severine as they rode Anne’s horse Gigi and my Flurry around the place.  (Why wasn’t I riding Flurry?  I had a broken wrist.  It’s all told here if you’re interested.  Or you could wait for the book to come out.)

We regularly rode down the dirt track at the end of this lotissement as we headed for the trails and open spaces on the other side of the main road, passing Crazy Tree-Chopping Man’s house as we went.  Except we didn’t know he was Crazy Tree-Chopping Man at the time.  He was Old Guy Who’s Always Doing Stuff In His Garden.  Sometimes it was horse-frightening stuff, and he was polite and kind and stopped what he was doing as the horses goggled their big brown eyes at him before eventually passing.

I only realised he was crazy a few months ago.

There are the remains of several trees in his garden – stumps sticking out of the ground and neatly stacked wood all over the place.  Nothing crazy about that, no.

Shortly after we moved in, he started to tackle the third-last tree in his garden, sawing off the lower branches with a large handsaw, tidying everything up every evening.  No, nothing crazy about that, either, although the neatness seemed to border on obsession. 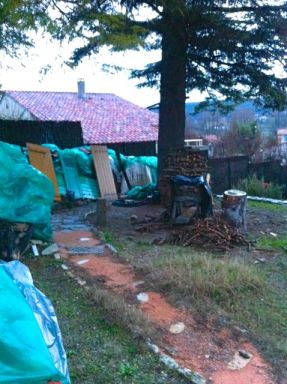 I finally saw the craziness several days into the third-last-tree-project.  I was taking the dogs out for their late afternoon toilet visit and a noise from above my head made me turn and look.  I nearly fell over with the fright when I saw my neighbour, about halfway up his tree, sawing away happily at a branch.  There was a ladder propped up against the trunk, but he was well above it, standing on a sturdy ehhhh…. twig.  He was wearing a climber’s harness and he was attached to a branch that was higher again, so he must have first of all climbed up there to hitch up the rope.  That’s just a bit crazy, yeah?  Well, the craziest thing of all is that this guy must be 75+

He’s been literally chipping away at the tree ever since, creeping higher and higher, removing every branch he comes to, large or small.  He ties off the branches and lowers them to the ground so that they don’t cause any damage on the way down.

He’s using a handsaw the whole time – even for the big branches.  Good thing, too – I shudder to think of him working away up there with a chainsaw in hand.  Who knows what could happen.

We have a friend who’s a French tree surgeon.  Was this a normal way to chop a tree down, we asked.  He listened, eyebrows merging into his hairline as we described the method being used.  Non, non, he said.  This guy is crazy!

Now I know what happened all those other trees.  I reckon this guy has some sort of vendetta against them and his life’s work is to demolish every tree in his garden.  When they’re all gone, I fear he will no longer have any purpose in his life.  He will take to a stool in the corner and become the old man that society thinks he should be.  Sad to say, he will probably not last long, either. 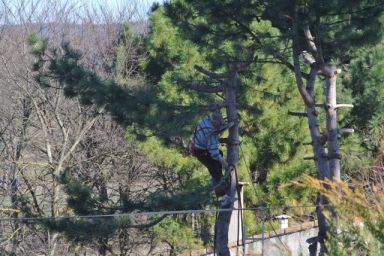 That’s assuming he doesn’t fall out of a tree beforehand, of course.

I salute him for his dedication and his individuality.  And his agility.  I don’t think I’ll be climbing trees in my seventies.

PS. I believe there’s another crazy person in the neighbourhood.  Rumour has it there is a mad Irishwoman who spies on her neighbours and takes photos of them.