I had two particularly pleasant hacks last week.  The weather has been lovely (up to this week.  Tansy is visiting, so it decided to rain a bit to make her feel at home) and I’ve started going up to ride as early as possible, to avoid flies and heat.  On Wednesday, I took Aero out for a short trek.  Cinnamon looked sad when she saw me leaving, so I took her along.  She turned out to be good company, and Aero happily accepted her as a hacking buddy. 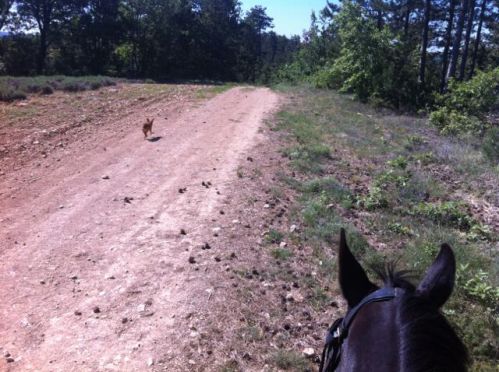 It’s the prettiest time of year here.  There are flowers everywhere, and when I saw our shadow passing over some blue flowers, I got all creative.  This is going to be my new Facebook profile pic!

Aero had just had his feet trimmed, so I used his front Renegades in case he was a little tender but I honestly think he would have been fine without them.  Next time for sure – although I won’t do much more than an hour with him barefoot for a while, yet.  I’ve started him on a really good Kelp supplement  to try to improve his skin and hooves another bit – he is very scurfy and I feel his frogs could beef up another bit.  He’s been on it just over a month now and I’m seeing an improvement in his coat for sure.  I won’t know about the feet until they’ve grown some more!

Then on Friday, MC and I went for a long ride, following the markers that had been set out for the cyclists the previous Sunday.  It started off along one of my favourite routes, with a beautiful view out across the valley. 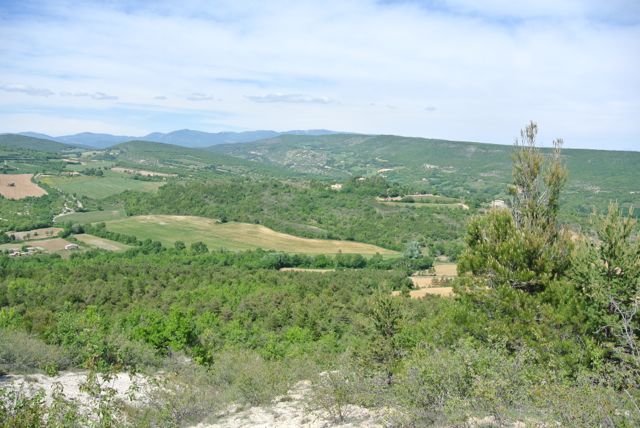 Farther on, it proved to be quite exciting in places – veloists look for a little more drama in their rides than two mature ladies!  We had to lead the horses down a couple of slopes which were almost sheer and offered ample opportunity for slipping, but the horses were fantastic – attentive and cautious.  They stopped when asked and inched forward when asked, always careful not to jump down on top of us and we negotiated everything with no hiccups.  Due to the need for hanging onto our horses, however, there are no photos of the dodgy bits! 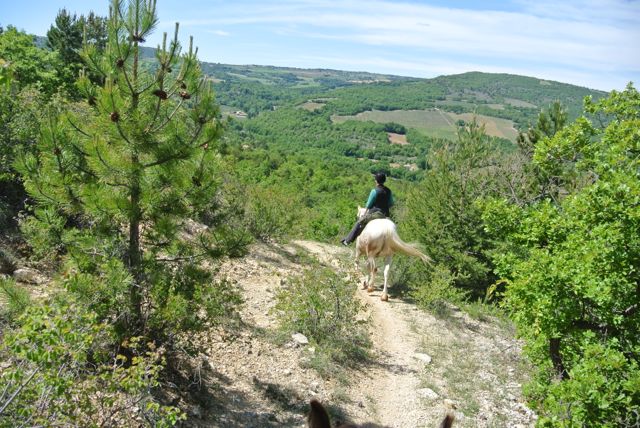 You never know what you’re going to pass when you ride through new country.

We were out for just over three hours, with Flurry barefoot for all but the last thirty minutes.  I felt he was just beginning to become a little tender, so I hopped off and put his Cavallo Sport boots on.  I had misgivings about these boots initially, but I’m very happy with them now.  They rarely come off, unlike Renegades, and they have never rubbed his heels, despite being a very snug fit.

Between the ride to Reillanne on the Sunday and this ride, Flurry covered a good 25km barefoot last week, on the very worst of stony surfaces imaginable.  That was just with me on his back – I’m sure he covers a lot more in the paddock by himself.  Anyway, I’m happy to say he has done a great job trimming his hooves :

I did run the rasp around the edges just to smooth off the walls the next day, but I suspect it wasn’t necessary.  I’m well pleased with his progress!  Fingers crossed that Aero’s will be as good as these by the end of the summer!