The Best Anniversary Present Ever

(or, Why I’m Glad the Eldest Daughter Lost her Job)

The Eldest Daughter (aka the ED) has been working for a prominent London publishing house for just over nine months now, as PA to the editorial director.  Her boss resigned just after Christmas, giving three months notice, but the ED was assured that there was still a role for her within the company.  Fast forward to the day after her boss left, and the ED was called in to Human Resources and told she was being made redundant.

Yeah.  She was not a happy bunny, but there’s nothing to be done in a situation like that.  Verbal assurances aren’t worth the paper they’re written on, after all.  I briefly thought about asking her to visit us, but I knew she would be job-hunting frantically and needed to be available for interviews.

Tansy (aka the Youngest Daughter, aka the YD) was booked to visit us last week.  Our wedding anniversary was last Sunday, but that wasn’t why she picked that particular week.  No, she picked the second last week in May because she thought it would suit her college work, bar work, gigging and rehearsal schedule.  It suited all four very well – that is, until the date for the repeat performance of their David Bowie tribute show was announced : May 31st.  She would be missing for the second week before the show, when she should have been starting rehearsals, organising posters, inviting the press to the show, making sure the set was suitable etc etc… but she is learning to delegate and delegate she did.  Then the band that she plays with, Nothing New Under the Sun, agreed to play an extra gig – while she was away.  Oh well, that was unavoidable, they would just have to cope without her.  And they’d also have to manage without her while they started rehearsing for the EP that they plan on releasing soon!  Plus she had some extra college work to do, but hey, she could do that while she was here.

So, in fact, her trip only suited her bar work schedule, and that was because she made sure she wouldn’t be rostered on during the week of May 18th to the 23rd!  But we were delighted that she was coming, and we planned on celebrating our anniversary a few days early so that we could celebrate while she was here.

The LSH offered go to Nice to collect Tansy from her late night flight on the 18th.  He would arrange meetings with a couple of colleagues while he was there, too, so he would leave in the early afternoon.  I planned to ride both horses in the morning and then do some yoga, make up the spare room and do some general tidying up in the afternoon.

Gratuitous picture of me & Flurry. In case you’ve forgotten what he looks like.

By noon, I had finished riding and I was hot, sweaty, hungry and tired.  I was just turning Flurry out when I got a phone call from the LSH :

“Workmate A has invited us for dinner.  He’d really like you to come along too so I said you’d be there.  We need to leave about 1.30.”

I was not too happy, but I said ok.  As I walked back to my Jeep (going very well, thank you for wondering) I became less and less happy.  By the time I got home, I would have less than an hour to shower, change, eat and make up the spare room.  I would have to spend at least five hours sitting in the car when I could be doing something more useful.  The dogs would have to come with us, too, so we would have to go in the Jeep, so the trip would end up costing us about three times the amount it would cost to do it in the Fiat 500.  I was also not at all impressed that he had told Workmate A that I would be there without asking me first…

I arrived home hot, sweaty, hungry, tired, grumpy and determined not to go.  As soon as I walked in the door, I said “I’m sorry, I’m not going.”  Then I played my trump card, “If I spend five hours in the car, my back will be knackered and I won’t be able to move tomorrow.”  Haha, argue with that point, LSH!

He seemed disappointed but said ok.  He left an hour later and I promised that I’d wait up for them to arrive.  I was really looking forward to seeing Tansy!

What I hadn’t realised was that he was planning on giving me my anniversary surprise – the ED!  As soon as he heard she had lost her job, he bought tickets for her to come and visit us the same week as Tansy.  Her flight was due to arrive in Nice at about 5pm and he had cooked up a scheme with her whereby he would take me to a bar on the Promenade des Anglais and she would just stroll in!  I’m sorry I ruined your plan, guys, but I think it worked out as a better surprise the way it happened.

Some time around 1am, Tansy phoned to say that they were about twenty minutes away.  As soon as I heard the car, I went outside into the street to hug my youngest daughter.

“Now we’ll give you your surprise, Mum,” she said.

“Oh, did you bring me crisps?” I asked (yes. I love crisps. O Donnell’s crisps are one of the things I really miss about Ireland).

They opened the boot of the Fiat 500 and waited expectantly.  I looked into the boot.  I couldn’t see anything that looked like either crisps or a surprise.  All I could see was Tansy’s rucksack.  What I didn’t see was the Eldest Daughter’s face peering over the back of the seat.  Well, I was looking in the boot, not inside the car!!

“Mum, there’s two of us!” came from the back seat and, finally, I spotted the ED’s face.  I had two daughters to hug! 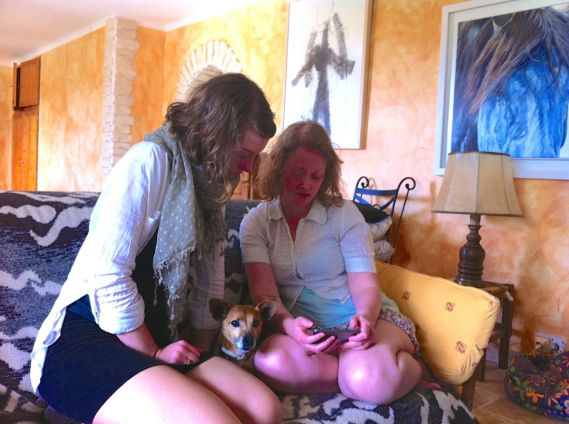 Snuggled up with Cinnamon

We had a lovely week with our girls.  I did yoga with them a couple of mornings, we walked a little, visited friends, swam (it was cold), did a little sight-seeing, had lots of lovely meals and the girls went hacking together one day – it is a long, long time since they last rode together.

Riding through a lavender field

So thanks, LSH, for what was absolutely, definitely the Best Anniversary Present Ever.

On Sunday, Flurry gave me what was absolutely, definitely the Worst Anniversary Present Ever… stay tuned.