We’ve just had five weeks of almost non-stop visitors.  We love them all and we were delighted that they wanted to visit us and we didn’t want to put anyone off, so we kept quiet.   Now we can come clean…

We’ve had a HUGE wasp problem in our pool.  It seems to be the watering-hole for every single wasp in Céreste.  In the days before the BFF and Granny arrived, there were hundreds of them at the waters edge, drinking busily.  In the days after the BFF and Granny arrived, there was a population explosion.  No joking, but there must have been THOUSANDS of wasps at the edge of the pool.

Mind you, they are very polite and very French, these wasps.  They are slimmer and much more reserved than Irish wasps.  Whereas the average Irish wasp is a loud, in-your-face pain in the ass, these guys are very polite and keep to themselves, even getting out of the way as we entered or left the pool.

But the problem was, the Belle Soeur and offspring were due to visit.  Her wasp phobia is the stuff of legend – I’m sure they sing songs about it in Ardmore, where she lives.

War was declared.  This involved the LSH and I getting up at 5am for several mornings to spray the wasps nests under the roof tiles.  Now, not only is the LSH quite averse to going up on roofs, he actually has a wasp phobia to rival his sister’s.  The only way he was prepared to face the wasps was if he was covered from head to toe as he sprayed their many residences under our roof tiles.

And he had his half-chaps (like gaiters, dear non-horsey readers) on, too.  Just in case the wasps flew up his trouser leg.

But the wasps remained asleep while he sprayed – slaughtered in their beds, I suppose.  The BFF and Granny gaily joined in the massacre by day.  Ailing wasps were flying from our roof down to the pool and getting stuck in the water.  The BFF and Granny spent many happy hours ushering the dying wasps into the pools filtration system (we called them the guepe-stapo – French pun!) and the LSH spent many less happy hours emptying the filters.

The next batch of guests started to arrive and the wasp problem was as bad as ever.  We may have killed off all the wasps that live in our roof, but there wasn’t much we could do about all those who live in our neighbours’ roofs.  Then we discovered a different waspicide.  This one gets sprayed around the edge of the pool.  It turned out to be lethal.  After the first dose, there were at least five hundred dead wasps floating around the pool within an hour.  After three days, we were down to tens of wasps at the water’s edge., not hundreds or thousands.  Result!

When the Belle Soeur arrived, it turned out that her wasp phobia isn’t nearly as bad as it used to be.  In fact, I’d go so far as to say, it’s probably not as bad as the LSH’s wasp phobia.  So Kudos to him for going up on the roof and facing his worst nightmare, just for his big sister.

But there have been other creepy crawlies.  Walking home from Céreste one night, something large zoomed out of the darkness and landed on the LSH’s head with a ‘thunk.’  He panicked (it could have been a night-flying wasp, you see) and flicked it off.  It flew through the air… and landed on Granny’s chest.

“Um, something just landed one me,” she said bravely.

Well, the LSH wasn’t going to retrieve anything from his mother-in-law’s boob, so I was called upon to find and remove it…

There have indeed been other creepy crawlies.  More creepy than crawly.

There was this guy, who Cookie found in the garden.  He was more dead than alive, by the time the LSH realised that Cookie’s barking was more hysterical than usual and went to investigate. 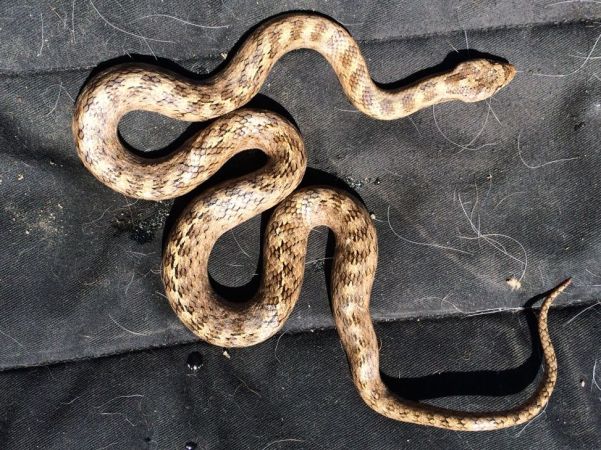 I’m pretty sure this chap was harmless, but there was another one…

Just before the BFF and Granny arrived, we were tidying up the second spare bedroom.  The LSH decided to open the patio door to let some air in and, in doing so, he partially crushed this little guy – you can see his tail is a little shorter than it was meant to be.

I’m not so sure this guy was harmless but, then again, I come from a country where we don’t have any snakes, so what would I know.

We took him out to the middle of a big field and let him take his chances with the Snake Eagles.

And that’s it for the moment.  I’m told July and August are scorpion season.  We’ll wait and see what that brings.