Woohoo!  My trailer is now an officially registered French vehicle!  Not without one final, heart-stopping, will-I-won’t-I-succeed moment, though.

On Monday, I trotted off to the DRIRE office in Aix-en-Provence to get the all important document which basically lists off my trailer’s characteristics and which has taken me four months to procure.  The lady in the DRIRE office told me that this was all I needed to apply for my Carte Grise (registration certificate) at La Préfecture in Digne-les-Bains.  Not only that, but she also assured me that they would give me the full Carte Grise on the spot.  Not a Carte Grise Provisoire? I asked.  Non, non, the proper Carte Grise.  She was very positive.

At 7am on Tuesday, I was preparing to leave for Digne and I thought, you know what? I’ll just throw that large envelope in the car, too.  The one that’s stuffed to the gills with copies of everything I have submitted to DRIRE so far.

I arrived at La Préfecture and the nice man at reception helped me fill in the form I hadn’t known I would need… Strike one for DRIRE lady.

I took a number and waited.  I didn’t have to wait very long, maybe five minutes, before my number came up.  I installed myself in front of a lady behind a window and handed over the two sheets of paper.  She shuffled through them (I didn’t know it was possible to shuffle through two pieces of paper, but it is, I’ve now seen it) and looked at me.

Where is the proof of purchase, she asked.

Strike two for DRIRE lady – but no problem, I quickly found a copy of the receipt in my large envelope and handed it over.

She looked at what I had given her.  Where is the original? she asked.

Well, if I had an original receipt, it would be in the file at the DRIRE office in Aix, except I lost it and they were happy to accept a duplicate… but I learned years ago not to get smart in a situation like this and I explained that the original had been lost and the company we bought the trailer from had sent us this by email.  Non, non, non, she said.  I would have to see the Chef du Bureau and he would decide whether or not a duplicate would be acceptable.  In other words “This decision is far too important for a lowly lackey like me so I’m abdicating all responsibility for your case to my boss so that if someone, someday finds out that your proof of purchase was not an original document and All Hell Breaks Loose, it won’t be my fault.”

I calmed myself with the thought that I now had options, plural, for getting to the National Championships.  Not only could I take MC’s ancient trailer, but there’s a lovely Parisian couple, who keep their horses at the farm, who had said we could take their very posh little two-horse truck if we were stuck.  You SHALL go to the ball – I mean National Championships – I told myself.

Eventually the Chef du Bureau appeared and I explained the problem.  He peered at the duplicate receipt, frowning.  It had the name of the company and my name at the top, the make, model and serial number of the trailer in the middle and the price we paid at the bottom.

What is this? he asked.

Ah Jaysus, I thought.  He’s going to insist on this being translated.

I explained it to him.  He scrutinised it some more.  Look, I said (in French) here’s a declaration I wrote (also in French) stating that I’m the owner.  He proceeded to leaf through ALL the documents in my DRIRE envelope.  Asked me some questions.  Was shocked to hear that trailers in Ireland and the UK don’t have registration documents, but carry the number of the towing vehicle.  Really?  Am I the first person to do this in Provence-Aples-Côte-d’Azur?  He also thought I said ‘Hollande’, not ‘Irlande’ so I cracked a joke about how us English speakers find it hard to say our R’s.  He laughed and said he had misheard.  Was the ice broken?  There were a few more questions…  And finally, after a pregnant pause, he said “OK” and scribbled “Ok pour la photocopie” on top of the page.

I was only shaking a little bit as I went back to the lady behind the window.  Ten minutes later, I was leaving La Préfecture, in dire need of a coffee and with my Carte Grise Provisoire clutched tightly in my little fist.  Strike three for DRIRE lady – but I didn’t care, I had what I needed to insure the trailer and hit the road. 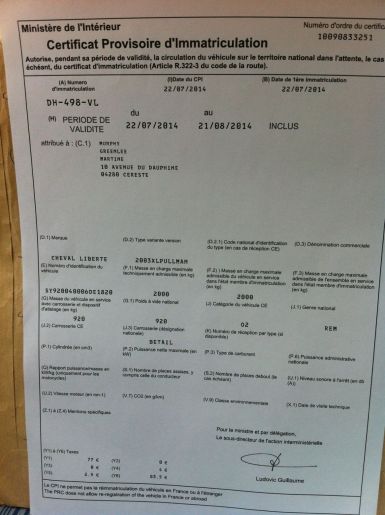 The moral of the story is, if you want to register an Irish or UK horse box in France, make sure you can speak French.  My French is far from perfect, but I blabber away.  If I had been a dumbstruck foreigner mumbling and stumbling in pidgin French, I’d be contacting James Barrett and Sons back in Coppeen in the wilds of Cork and I’d be asking for another receipt for my trailer.  (Sorry, D, I lost the original, but it made a good blog post! xx)

There may be Radio Silence for the next five or six days, depending on internet access and energy levels.  We are leaving at 7pm and driving through the night (it’s cooler for the horses) to arrive at our destination very early tomorrow morning.  I will be tweeting so if you want live updates, you can follow me @MaGreenlee on Twitter or follow Tails From Provence on Facebook (my twitter feed connects to that page).