Our competition didn’t start until Saturday, so we had Friday free.  We did a little work with the horses in the morning and then, at MC’s suggestion, we took Quieto and Flurry over for a look at the Parc Fédéral – the horse park.  In my head, we were doing this for Quieto’s sake, as he can be very out of sorts away from home.  Flurry was just going along for the ride, as far as I was concerned.

Well my safe, sensible little cob who has seen and done so much was completely overwhelmed by the sights and sounds of the world’s biggest equestrian competition!  We found a quiet sand arena and tried to do a little work with both horses.  Flurry was like a demon, trying to tank off towards Quieto, bucking and even lashing out in my general direction, although he was too far away to connect.  Quieto settled much quicker than Flurry but after a while we decided that they were calm enough to go deeper into the melee and have a look at the manège where our competition would take place.  There were pedestrians, cars, horses and bikes everywhere, zipping back and forth in a crazy scrum, with loads of riders and horses dressed up for the dressage fancy dress competition (no, that’s not its proper name.  I don’t remember what it’s called).

Some of the horses looked happier about fancy dress…

Flurry was just about keeping it together until we were passing a jumping arena.  The French take their role as fans very seriously, and every competitor had an army of supporters on the rails, cheering for every fence.  Someone finished a clear round just as we passed and the crowd went wild, to the accompaniment of celebratory music.  It was too much for our poor horses and they danced and jigged around us, nerves completely frazzled.  Forget your equitation ethologique, we just hung on as best we could!

Eventually, after about two hours, we went back home with two reasonably calm horses.  I was damn thankful MC had suggested this trial run!

Kisses for Quieto the good boy

Next day was competition day…

Alexandrine was first up in the Elite class with Max.  Max is an OTTB, but he’s the calmest TB I’ve ever met.  On this day, he was maybe too calm.  He wasn’t really tuned into Alex and they fluffed up a couple of things, leaving her well down in the placings and quite disappointed.

While they were competing, we were getting the ponies ready, with the help of one of our loyal Gaec de Pimayon supporters, Fabfan.  (We had three supporters there that day, Fabfan who had driven all the way from Provence and Mr & Mrs Paris, who had driven all the way down from Paris.  Pretty good for a teeny club from the wilds of Provence, in its first year of existence!) 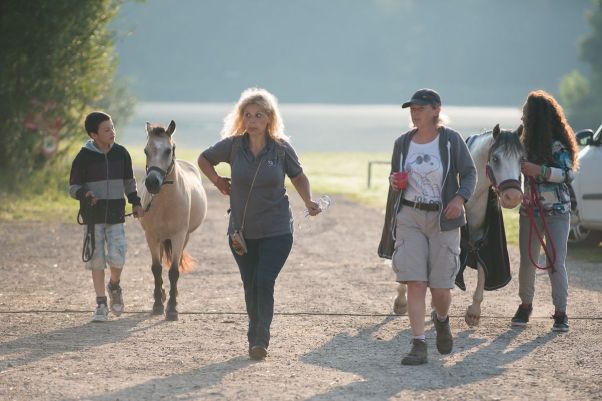 Getting ready to load up the ponies

Girl was at the Championnats last year and came last.  This year, her goal was “not last.” She is a wonderful handler to watch, but Neros can be quite spooky and difficult at times.  Anything could happen… 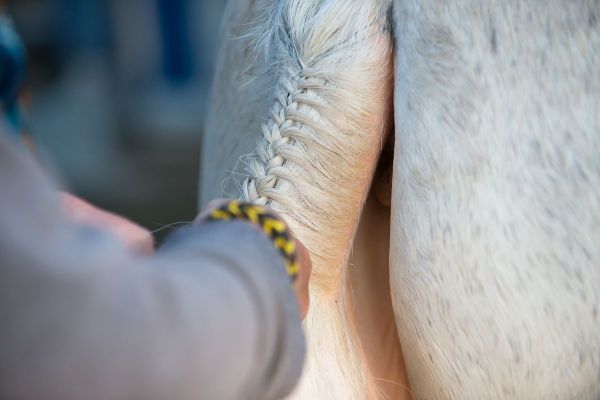 Boy, on the other hand, was sure he was going to win.  I thought he was in with a very good chance, myself.  A year ago, Spirit used to have some really naughty moments, but this year it’s clear that they have a very special relationship.

Boy and Spirit sharing a moment

They both put in good performances on the first day.

Boy and Spirit negotiating the flag in the embuches. It was much easier for them because Spirit is so small!

At the end of the day, they were well placed – boy was joint 5th and Girl was joint 4th out of 17.  Boy was still sure he was going to win.  Girl was happy with where she was.

Afternoon came and it was time for the club section.  With 62 competitors, this was the biggest equifeel class of the day.  MC and Quieto went first, while I waited at a discreet distance with Flurry, who was marginally more settled than the day before.  MC made the mistake of attempting the very first test, the slalom, at liberty.  Quieto normally does this with his eyes shut at home, but he was too distracted, and paid no attention to MC.  Zero scored.  Then they got a -2 at the next test, the jump, but things improved for them after that, although he did try to eat the flag in the embuches! 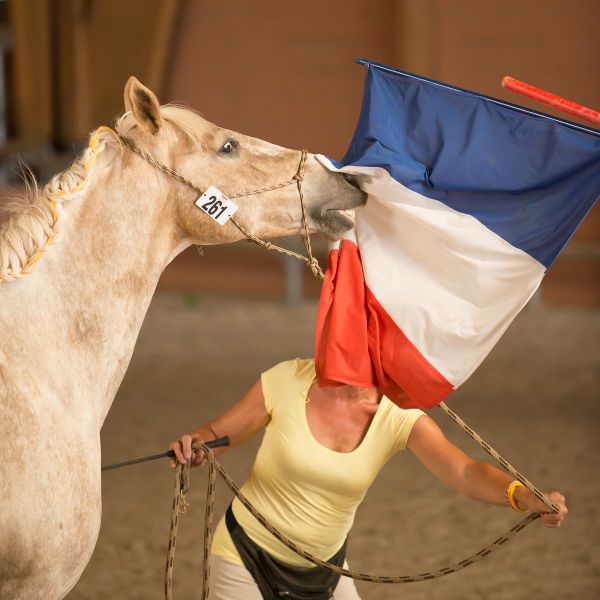 And then it was my turn.  Flurry had been quite inattentive in the warm-up but it was difficult trying to get his attention with 6 other horses and handlers milling around.  Funnily enough, I wasn’t the least bit nervous.  Maybe things would have gone better if I had been…

At this point, I’m thinking “Crap this line is an awful long way from the cones.”  Flurry’s demeanour also does not augur well…

It went surprisingly well until the 3rd last cone, which he knocked over.  I had to fix it and then redirect him back into place to tackle it again.  Not easy, but somehow we managed it with a -2 for the knocked cone.

After the slalom was the jump on a circle.  Flurry is good at this.  We were going for the 15 point option – over the jump, turn and over the same jump again, than halt, outside of my ‘zone de contrôle‘, facing me.  No problem.  Very relaxed Martine…

I got this, Mum! No problem!

Unfortunately, a very relaxed Martine is not always a good thing.  Flurry jumped, turned, jumped, halted on request.  Turned and faced me, halted.  Done, I thought, and BANG one big, hairy front foot stepped forward into my zone de contrôle.  Fifteen points to zero points in an instant.

Oh well.  The Embuches were next.  That should be ok too, for the fifteen point option, I thought.  The only obstacle I was worried about was the displaced trotting poles, so I decided to leave that until last.

Pleased with this cos I’m not pulling him. Also when you choose a 15 point option, you cannot touch the horse either with the stick or with your hands

But wait!  Problème!  We missed a barrel!  And I don’t know what possessed me, but for some reason, I thought I could pass behind the barrel with Flurry i.e. basically lead him around it.  Non non non, said the judge, you have to go back and do it all again… so we did, faultlessly this time.  But I’d forgotten that there was a time limit…

…and we went past the displaced poles to do the bridge… 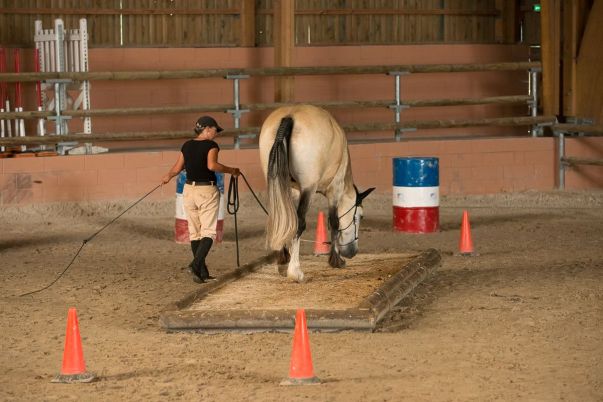 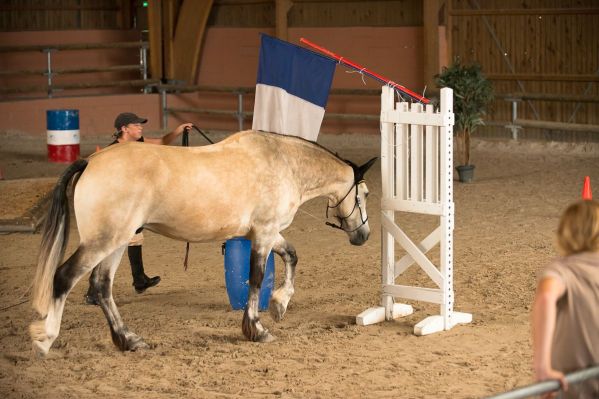 …and finally went around to do the displaced poles.  Perfectly.  First time.  Yay! 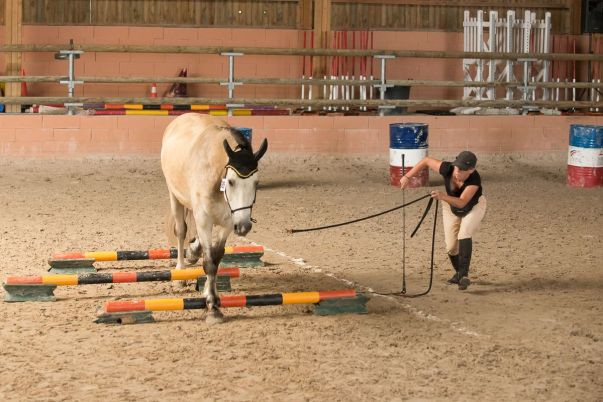 But the judge shook her head sadly and said she was sorry but we were just over the time limit.  Zero score.  AAARGH! So that was a total of 30 points I’d thrown away!

Next was the essui-glace, windscreen wiper.  Basically the same as the jump we had done earlier, jump, turn and jump again.  I was going for the safe 10 point option, with a lead rope attached to the halter, rather than via an elastic band. 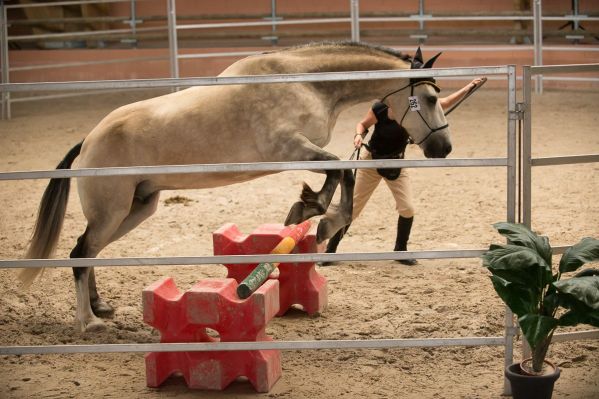 Alexandrine was watching and was shocked that Flurry will willing jump from practically a standstill. That’s the good Irish horses for you, I told her

Done.  Easy.  And he stayed out of my zone this time!  In hindsight, I’m sure he’d have done it at liberty for 20 points if I had tried.

Finally, we had the bache, or tarpaulin.  I opted for fifteen points.  Again, maybe I should have gone for twenty.  He walked onto the tarp, halted when asked, stood still while the judge counted five seconds and walked off again into the ‘stop’ zone.  And instead of asking him to stop, I let him keep on walking.  I really have no idea what I was thinking, in fact, I think my brain had completely stopped functioning.  The judge yelled at me told me to halt in the zone, I turned Flurry and parked him back in the zone.  The judge was staring at me, shocked that I hadn’t stopped.  And I have to confess, I played the Dumb Foreigner card and said I hadn’t understood.  I’m sure I will never get away with that one again…

She was clearly wondering what to do.  I was expecting a zero and I turned away and gave Flurry a kiss on the nose because he’d done a great job, all the mistakes were mine and mine alone. 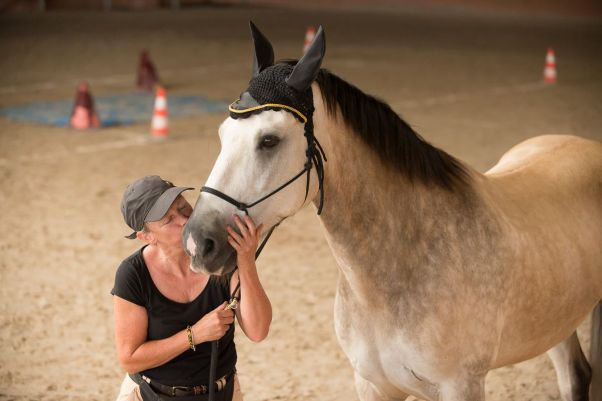 And I think that action endeared me to the judge.  She gave me a 2 point penalty instead of a zero, saying “You had one foot out of the zone.”(Um yeah, I know it was two or three more feet than that, but thanks very much!)  I just smiled and said “Merci” and left.  Thirteen points instead of fifteen, but it could so easily have been a zero.  Phew.

I was very cross with myself, but not disappointed with my Flurry’s performance.  We’d have been placed ninth at that stage if I hadn’t screwed up so spectacularly and we’d have had it all to play for the next day.  But as it was, all I could do was take comfort in the fact that me and Flurry are actually well up to the level required.  We’ve upped our game since the regional championships and we did loads of things for 15 points, and I know we’re capable of doing some things for 20 points as well.  Next year will be our year!

Sunday brought some surprises… next instalment as soon as I can.  I’m in Ireland for Granny’s 80th birthday party and may not have much blogging time.