The last couple of weeks have been a whirlwind of travel, excitement and a major sleep deficit.  I had been toying with the idea of giving the horses the month of August as a holiday and came to the conclusion last week that it was a really good idea.  Aero had had the osteopath just before we went to the Championnats and I had a little bit of physiotherapy to do with him afterwards, so I finished that and then rode him twice to get a feel for how straight he’s going.  He’s bending left a good deal easier, but he’s still not convinced about it.  It’ll take time before the muscle memory is corrected, so I’m leaving that for when we restart in September. 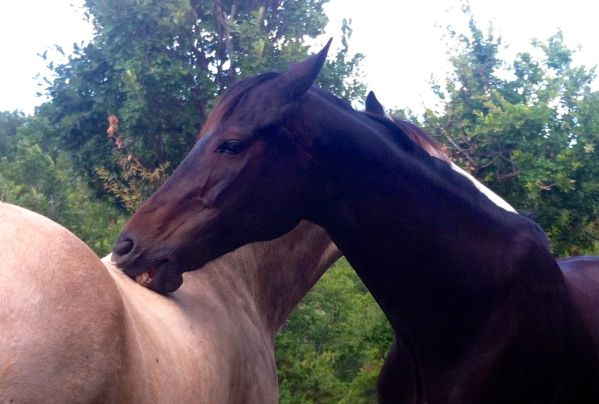 The Boys enjoying a holiday scratch

Now that the horses are on a break, it’s time to start catching up with my blog reading!  I’m waaaaay behind! I might not leave comments everywhere but I will get to you all, I promise.  Meanwhile, here’s what happened last weekend.

First of all, I was on the receiving end of a whole lot of courgettes and cucumbers.  Some of them were eaten straight away and some of them were pickled.  This is a brilliant recipe for pickled cucumbers, Bread and Butter Pickles, that I found via Yummly.   They ready to eat almost immediately and are delicious!

I spent most of Friday pickling, then I spent most of Friday night being sick.  I just hope the two weren’t related.  I spent most of Saturday feeling a bit washed out, especially after doing two hours gardening in the morning, so I took it easy for the afternoon because MC and I had plans for the evening – we were driving to the little village of Boulbon to see a show called Tangalo.

MC loves dancing, especially Argentine Tango, and used to dance a couple of nights a week up to five years ago, when her hip started causing her grief.  She also loves horses, as you undoubtedly know by now if you’re a regular reader.  Tangalo is a blend of Tango and horses “where the horses tango and the riders piaffe” so it’s right up her alley.  I was keen to go along too, just to see what it was all about.

We knew it was being held in an equestrian centre, but we didn’t know what to expect.  Would it be indoor or outdoor?  Horses tap dancing on wooden floors or dancers vaulting on and off horses?  They had said that people were welcome to arrive early and have a look around the stables, so we did.

The horses were all tied up in their boxes, being beautified for the performance.  We were surprised that they were tied up, but I guess if I had the public coming into my yard for an evening, I’d make damn sure no-one was going to get nipped. 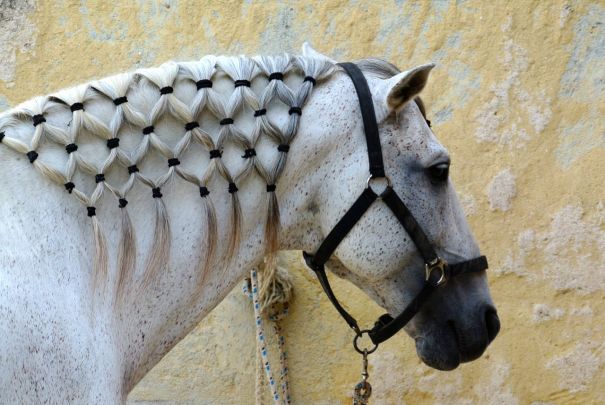 They were all Spanish horses, and most of them were stallions, which I found interesting.

Performing horses are huge on the continent – it’s just another branch of the equestrian world over here. 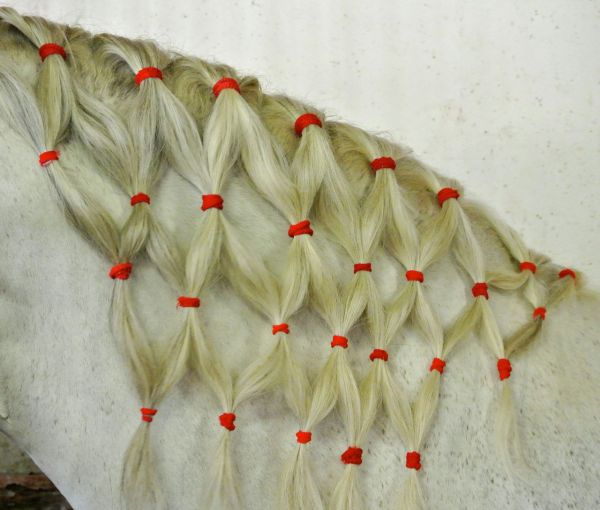 It’s not pure dressage, but it’s nice to watch.

The performance was to be held in a large circular arena, with high stone walls, like a bull-fighting ring.  There was a square platform of boards set out on the sand in the centre and seating for about 700 people.  We took our seats early so we’d be ringside and we had a great view of everything! 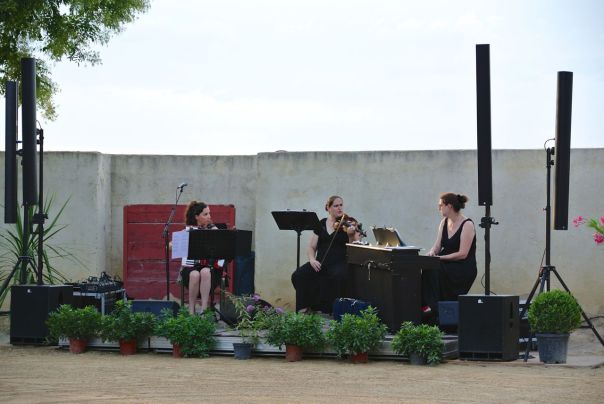 I wasn’t expecting live musicians, I assumed there’d be a recording.  These ladies were top class and MC found out afterwards that they are very well known Tango musicians.

We started off with two dancers on the platform. 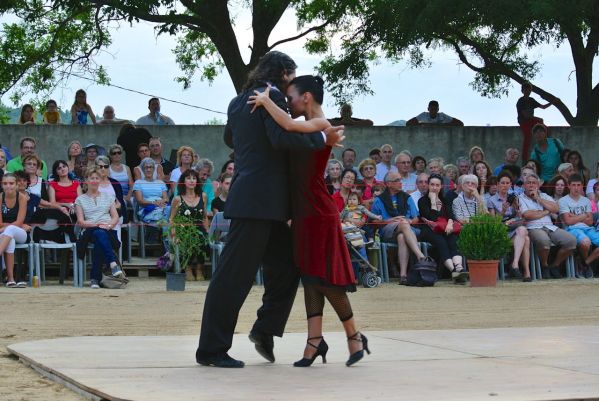 They were joined by first one horse and then another. 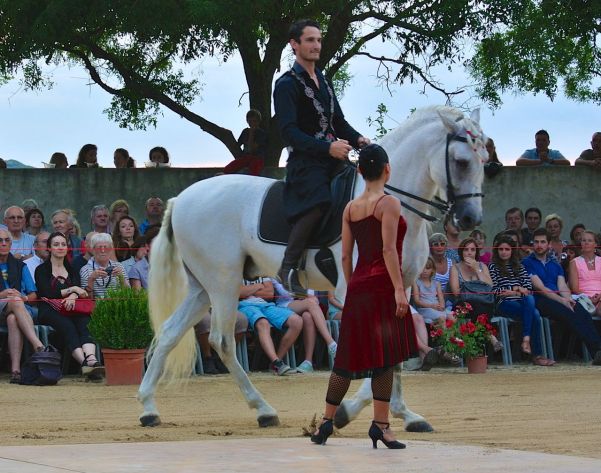 There was lots of Spanish walk – well, what do you expect from Spanish horses!

The male & female riders performed a sort of pas de deux while the dancers continued to dance, cantering… 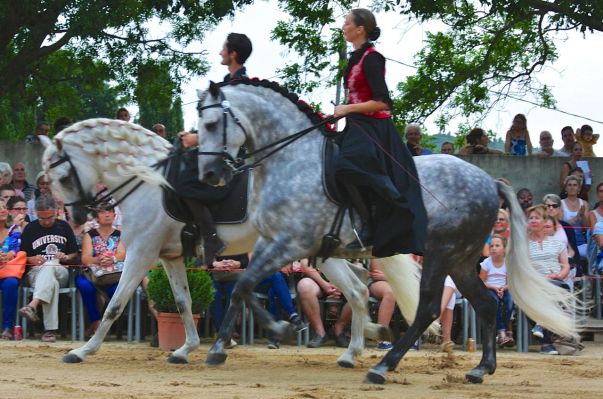 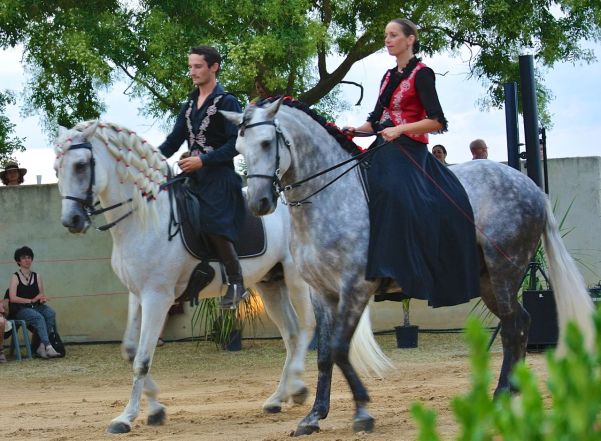 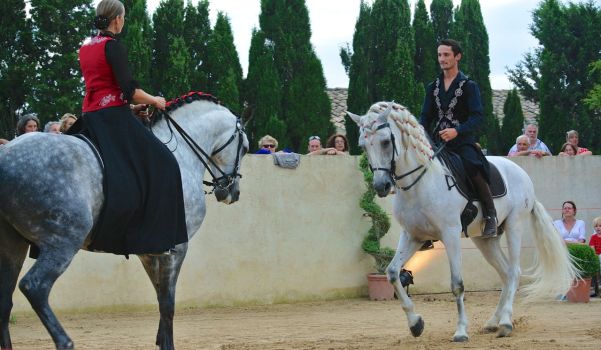 The performances got better as the show went on.  Next in was a lady in a flame coloured costume, who danced by herself first of all… 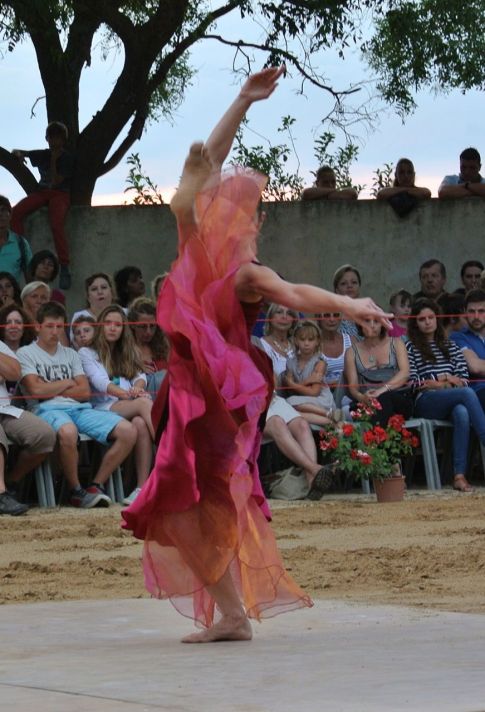 until she was joined by a horse and rider in a matching costume.

This time, the dancer literally danced with the horse. 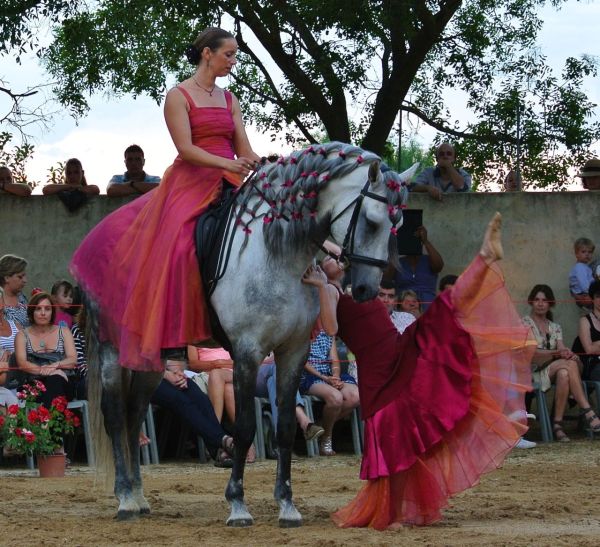 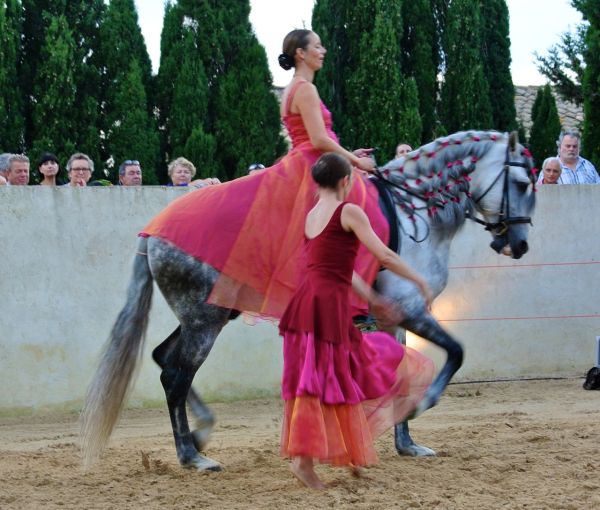 You may have noticed a softness to my photos which you don’t normally see.  This is because the light was fading fast and I’d made the mistake of bringing my zoom lens, thinking we’d be some distance from the action.  I also assumed there would be artificial lighting – there wasn’t, apart from a few spotlights directed at the wall to enhance the mood.

I kept taking photos for as long as possible.  Next in was this guy, Vincent Liberator – now there’s a stage name if ever I heard one!  He’s along the lines of Jean François Pignon, who I saw at the RDS two years ago.

This guy was good – not as good as Pignon, but good just the same. 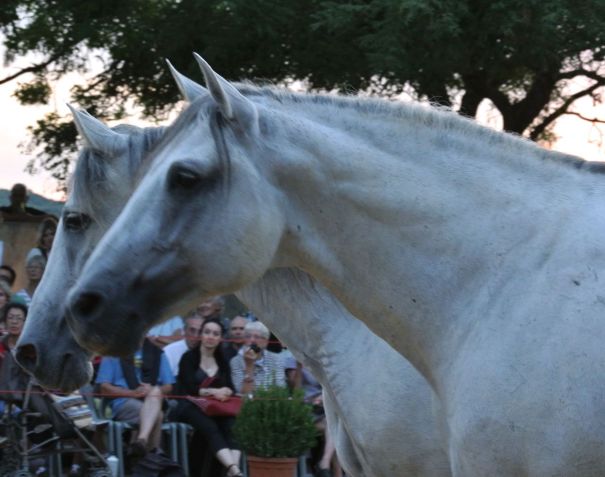 His cues were, for the most part, very subtle.

Each horse knows its name, and when he calls them, they step forward to do their job or, if it’s a correction, they sheepishly stop what they’re doing.

They were all thrilled with the sand, and every single one of them had a sneaky roll when the boss wasn’t looking.  They also sampled the decorative flowers that were placed around the arena, to the delight of the crowd if not their boss!

The light was nearly gone at this stage, but I snapped a few photos of the next performance, once again a pas de deus, although with the lady riding side saddle and with some more advanced movements this time…

like pirouetting around each other and lots of flying changes. 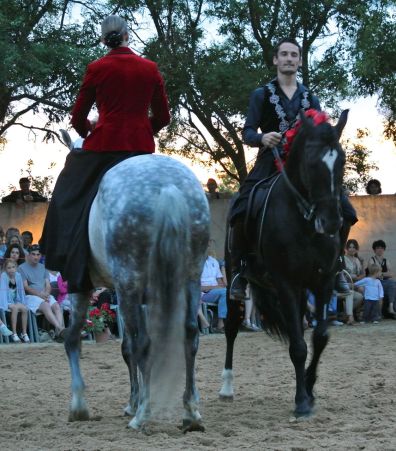 There were a few heart stopping moments when the grey horse took fright at something – I’ve no idea what.  He galloped flat out around the area for a couple of laps before the lady got him back under control and resumed the performance as if nothing had happened.  The show must go on!

After that, it was too dark for photos.  In fact, by the time the show finished, we could barely make out the performers.  That would be my main gripe about the evening – if it had started even half an hour earlier, it would have been much better.  Or if they had had a couple of spotlights!

I did find a short video on YouTube which summarises the whole show.  Here it is, if you’re interested.

It was quite surreal to be watching such a polished, well produced show while sitting at the side of an arena in an equestrian centre which is literally in the middle of nowhere.  The other strange thing about this place was that it has a Salon de Danse – a little ballroom!  After the performance, there was to be dancing there, for those who wanted (not me! I was blessed with two left feet at birth!)  MC was dying to dance – it’s been five years, and she wanted to find out if her new hip and her arthritic knee could cope with the Tango once again.  As soon as we walked in, she met a man she knew and was whisked off onto the dance floor.  And yes, she can still Tango.  She was very, very happy and very, very reluctant to stop dancing…

Eventually I dragged her off the floor, bundled her into the car and drove home.  We got back a little before 1am.  Yawn.  I’m back in sleep deficit once again.