I asked Lori over at Skoog Farm if she’d be interested in a couple of pickle recipes, as she has a glut of courgettes (zucchini) too.  She said yes please, so I was going to reply by mail and then I thought some of you others might be interested too.  Not only that, but I might get some information back from you guys – I have a couple of queries!

The first recipe I followed was a Jamie Oliver one from the FoodNetwork.com – Amazing Pickled and Marinated Vegetables.  Normally, I love Jamie Oliver’s stuff, it’s always really easy and really tasty, but I’m just not sure about this one.

I almost completely followed the recipe.  It calls for six sprigs of mint with 2 lbs of courgette – I used 6 sprigs with 2kg courgette, about half the recommended amount, because I didn’t want the mint to be overwhelming.  It also called for a fresh chilli pepper in the pickling marinade; I used 2 dried birds eye chillies instead, because I don’t have any fresh ones and it’s REALLY difficult to get fresh chillies here.

This recipe struck me as being an unusual pickle because the vegetables are just blanched in the vinegar mix and are then actually preserved in olive oil.

So this is my first question.  Have any of you preserved vegetables in olive oil?  I did it a couple of years ago with garlic.  The garlic became very strong, so I had to use it very sparingly if I needed garlic in a recipe.  The oil became very garlicky and could be used in minuscule amounts in salad dressings etc.  As a way of preserving the garlic, it was ok; but it did not enhance the garlic in the same way as pickling in vinegar would have done.

Anyway, I tasted the Amazing Pickled and Marinated Courgettes today.  I’m not convinced.  Maybe they need a bit longer?

That’s my second question – when you preserve vegetables in oil, does the taste continue to develop as it would in a vinegar pickle?  Third question – does anyone have an opinion as to how long they’ll keep?  I know olive oil was used as a preservative in Greek and Roman times, but this recipe says it only keeps for three months.  That’s not long enough to carry us over from Seasonal Glut to Winter Scarcity!

I have a huge stone jar full of Amazing Pickled and Marinated Courgettes to get through so I hope that they either improve or that they turn out to be useful for cooking. 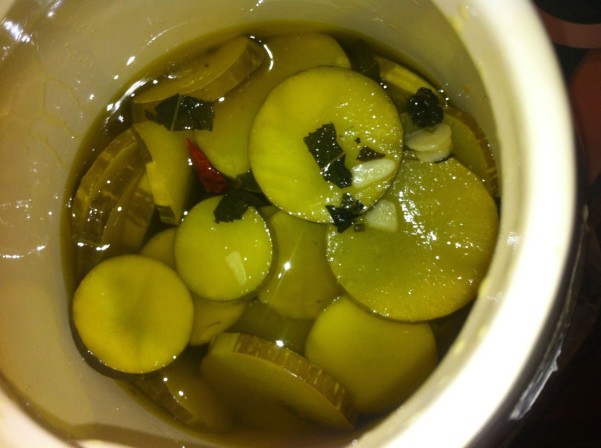 This one came from BBC Good Food, another reliable source of recipes.  It’s called Crunchy Courgette Pickle.  It’s a more traditional pickle recipe in that you mix up a flavoured pickling vinegar and preserve the courgettes in that.  There’s no blanching of the courgettes.  Instead, you have to leave them sit in a bowl of ice water for an hour – I guess this is to draw any bitterness out of them.  Then you add the sliced courgettes to the pickling mix and store in jars.

This all sounds great until you get to the last line.

“Kept chilled, these will keep for a couple of months.”

What?  I thought the whole point of pickling was that the veggies could be stored in the larder afterwards!  Is this just ass-covering by the owner of the website? (Question four.  Please answer if you can!)

Anyway, I tasted these today too and, for flavour, they get an unqualified thumbs up.  They’d go really well with hot-dogs, cold meats, patés, burgers… 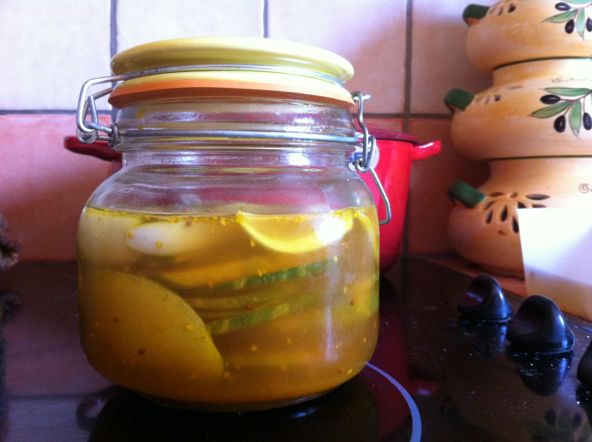 Years back, I bought pickled cucumbers at one of the Framer’s Markets in Cork.  They were really tasty, so I wanted to find a similar recipe.  It was surprisingly difficult – most of the pickled cucumber recipes out there are for gherkins, not for thinly sliced cucumber.  Eventually, I found this via Yummly, Bread and Butter Pickles.

I followed the recipe closely, reducing the sugar as advised by the writer and omitting the celery seeds because I hate celery and I don’t have celery seeds…

‘They will begin tasting pickled in just a couple hours’ sounded good and they were indeed delicious a couple of hours later.  But once again they must be kept in the fridge!  And even at that, they’ll only keep for three weeks?  EH?

TBH they are so nice that there is no danger of them lasting three weeks, but if I had a shedload more cucumbers, I’d want them to keep for a couple of months on a shelf, not cluttering up the fridge, thank you very much.  Right now they are being ladled onto our plates whenever we’re having cold meat or cheese.  Really, really good.  Double thumbs up for tastiness.

Lori, I hope that’s helpful for you!  Do let me know how you get on, and if anyone has an answer to any of my questions, please fill me in! 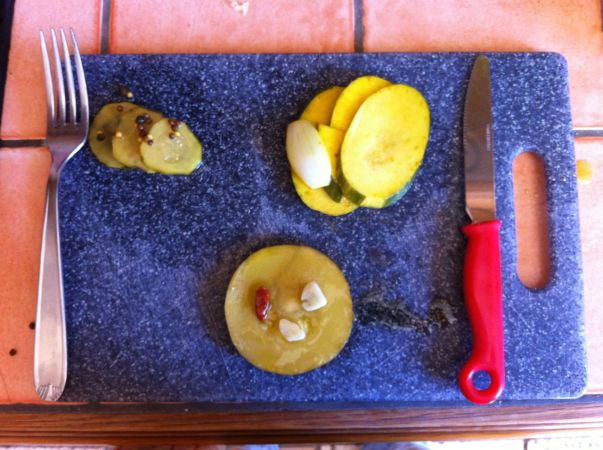