When we came to see our current house, with a view to renting it, we both had the same thought when we saw the blank end wall beside the pool and the summer kitchen.

“You could show a movie on that.”

(I have to qualify this by adding that we are absolutely NOT movie buffs, by any stretch of the imagination.  I really don’t know where this desire to project moving pictures onto an empty wall came from.)

We had a trial run a couple of weeks ago.  We borrowed our friends’ screen, sound system and DVD player and used our own projector.  Then we settled down with our friends M & D to watch Les Untouchables (the French version, not the Hollywood one.  The French version is better, apparently). Our makeshift cinema worked really, really well. Ooh la la, this could be good, we thought!

We had a little bit of discussion about what movies to watch.  Because our audience would be a mix of French and English speakers, we decided to show two short films, one in French and one in English.  Well, I had the prefect French one – Crin Blanc.  We had a bit of trouble deciding on an English one and, eventually, we opted for one of Nick Park’s excellent Wallace and Grommit claymation films, A Close Shave.  Both movies were multi-award winning productions in their day and I felt that A Close Shave would be easy enough for non-English speakers to follow, although they would miss out on all the excellent puns!

We chose a Monday night for the premiere of our outdoor cinema.  The day before, we looked at the forecast.  Damn.  Rain expected… we checked the forecast again on the morning and it still insisted that it would rain.  We had no choice.  We had to reschedule.  The rain never materialised but, thankfully, most of our guests were available for our alternative date, the next Saturday.  The weather stayed clear and we finally went ahead.

Thanks to our very creative friends, M & D, we had all the trimmings of a good Premiere – coloured lights, a good sound system and a fancy sign.  (D made the sign, isn’t it great?)  We sourced the red carpet ourselves – it was a roll of red paper, attached to the concrete drive with parcel tape!

We borrowed chairs from friends and neighbours and laid them all out, along with all the chairs from inside our house.

Then we lit the candles along the red carpet and waited for our guests to arrive.  And arrive they did.

Phew.  It would have been a bit embarrassing if no-one had turned up! 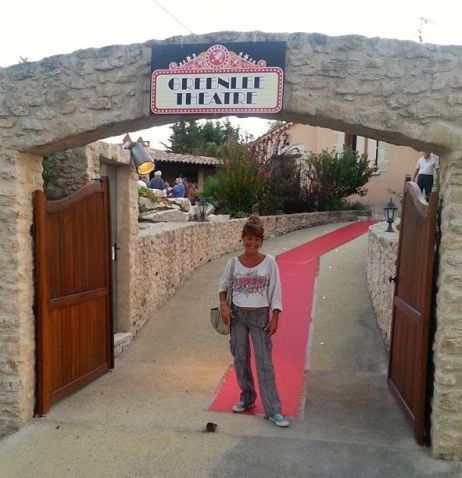 We had very simple aperitifs set out – chips and popcorn, basically, with everyone asked to bring along whatever they wanted to drink.

Everyone stood around and chatted while we waited for the stragglers (that would be Sprocket and Doodles, the real movie buffs, and their friends Nicole and John.  Yeah.  I’m telling tales out of school here.).

Finally they arrived, to be greeted by the usherette/popcorn salesperson.

First of all Crin Blanc, a superb movie about a wild Camargue horse.  It was made in the 1950s and it’s completely unsanitized.  The gardiens (Camargue cowboys) lasso Crin Blanc and five of them hang on as they are dragged around a corral before the horse breaks away and smashes through the fence.  When two stallions fight, it’s real – you can see the wounds appearing as they tear at each other.  There were no animal welfare concerns in the 1950s – a bad thing for the horses, for sure, but it made for an amazing movie!  And the ending stunned many of the English speaking audience into silence – yes, a kid’s movie without a happy ending.  The French are good at keeping it real.

We had an intermission before the second feature, then everyone sat down again (it took some persuading, they were all too busy talking) to watch A Close Shave.

I love Wallace and Grommit!  American readers, if you haven’t seen any of these movies (there are four of them) try to find them, they’re hilarious!  The non-English speakers followed it ok (it didn’t have subtitles) but they knew they were missing out on puns whenever all the English people starting laughing.  It’s a shame, but somethings just don’t translate.  “I’ll call you Shaun,” for example.

Finally, the night was over and our guests departed, all of them very complimentary about the evening’s entertainment.  The LSH and D disassembled the techie gear while I cleared off the perishables and the dirty glasses.  We got to bed about 1pm – a late night, but it was well worth it!

Next morning, I dragged a slightly hungover LSH out of bed and up to the horses for his first trek in months – he hasn’t ridden since last March.  More on that tomorrow.