The LSH hadn’t ridden for roughly six months, for no reason other than that he was busy; I had other companions to ride with; I was doing a lot of ground work so I was trekking less; we all got a bit lazy in the summer etc etc etc… On Sunday, after our late night as Cinema hosts, we were rudely awakened at 7am with the merry sound of gunfire ricocheting around the valley.  Oh hooray.  It’s hunting season again.

The LSH was less than impressed, seeing as he had a slightly fuzzy head after the night before and there was no way that falling asleep again was an option.  Hunters are allowed to start at 7am and they were taking advantage of every minute of daylight at their disposal.  Seeing as we were awake, we decided we might as well get up and have a cup of tea to get us going and, an hour later, the LSH was feeling human again so we went off to the farm to go for a short hack.

The first and last days of hunting season are the most popular and we could see cars and jeeps parked all along the woods as we drove up the hill.  We decided it would be most sensible to stick to the major trails in the woods and to head south east – there are three new hides in the woods on the other side of the farm and Georges advised us to avoid them.

So off we went.  Me leading the way on handsome, confident Aero.

The LSH and Flurry followed along behind :

This was the first time I’d ridden Aero in a bridle for ages.  To be honest, I was sorely tempted to ride him in the rope halter – I’m feeling that confident with him these days.  But wisdom/caution reigned supreme and I stuck to the bridle.  He didn’t seem to mind too much!

After half an hour or so, Aero felt he’d been on point duty long enough and he allowed Flurry to pass him.  I took advantage of the opportunity  to snap a few ‘bare hooves in action on stony ground’ shots.  He’s 100% sound on this horrible gravelly road now.  It’s great to see.  Aero still wears Renegade boots on his front feet.  He’s such a softy.  I think he needs the extra protection that they give him. 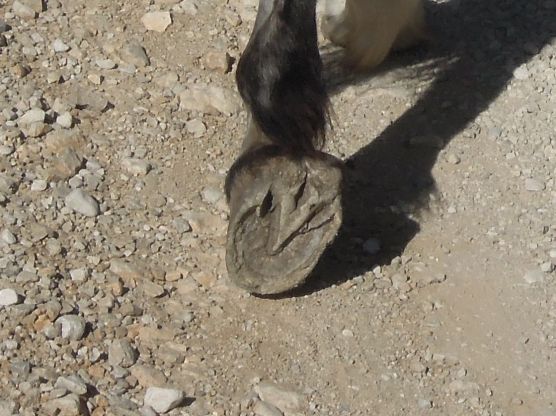 We met some hunters on the road and stopped for a chat with one of them.  He knew me to see, I think I’ve passed by his house on one horse or another a few times. He hadn’t had any luck but he said one of their group had shot a sanglier (wild boar).       He and the others he was with seemed to be giving up. I guess it was time to head to the bar!

I noticed some really good blackberries just beside the farm so I went and picked them after we turned the horses out.  Blackberries here tend to be much smaller, much less juicy but much sweeter than Irish ones.  This year has been unusually wet so they are bigger than normal – almost as big as at home!  I picked enough to add to my breakfast yoghurt for the next two mornings.  They were a yummy change from the strawberries that our garden is still producing.

The following morning, I rode Flurry in the arena.  The weather had changed, with rain forecast for most of the day, so I decided to just do a quick flatwork session with his bridle (as opposed to bitless).  Nini and Alexandrine were in the arena as well and they put up a small jump after a while.  Poor Flurry was dying to jump it.  Really.  Any time I rode past it, he leaned in towards the jump, hoping I would ask him to do it.  I was sorely tempted and I came to the conclusion that yes, I probably will start doing low jumps with him, just because he loves it so much.  But Monday was not the day to start – my back hasn’t been right for a couple of weeks and jumping would definitely have made it worse.

Flurry still had his bit of fun, though.  I asked Nini if she’d like to jump him!