The Mud Monster Does Dressage Part 2

But then (I was about to go away to a quiet corner and learn my next test, remember?) Alexandrine said to me that they were looking for riders in Club 2 Grand Prix.  It seems I wasn’t the only late arrival of the day, and the call up steward had said if anyone was ready, they could go ahead.

Well, this was irritating.  Flurry was perfectly warmed up and ready to go, but I really didn’t know the test well enough to go  in straight away.  Sure, I knew the gist of it, but it was the smaller details, like is the trot across the diagonal with lengthened strides from S to P or from S to K?  I said I would take a few minutes, during which time I could watch one person go, refresh the whole test in my head and do a final tune-up with Flurry – a couple of walk/canter transitions and a little bit of leg-yielding.

I watched one person go.  Ok, now I was sure of where I was going.  Sharpen up Flurry and we’ll be off…

He was absolutely fine.  Normal, steadfast little Flurry.  We trotted and cantered, did a leg-yield on each rein.  We were now ready to go, but someone else had gone into the arena.  I would have to wait a bit more.  I continued to walk Flurry around the warm-up arena and then two things happened.

First of all, the larger warm-up arena – the one with all the show-jumps – was invaded by about forty small kids, along with their trainers, parents and general hangers-on, who were all set on doing a course walk.  This meant that most of the horses that had been working in that arena now moved into the small arena where I was riding.  So the second thing was that seven or eight horses appeared out of nowhere and started warming up all around us.

Flurry still felt normal – maybe a little more tense, with all the other horses around, but still normal.  Then we passed very close to another horse and he lashed out at it – very unusual for him.  He has never, in the four years I’ve owned him, kicked out at another horse. 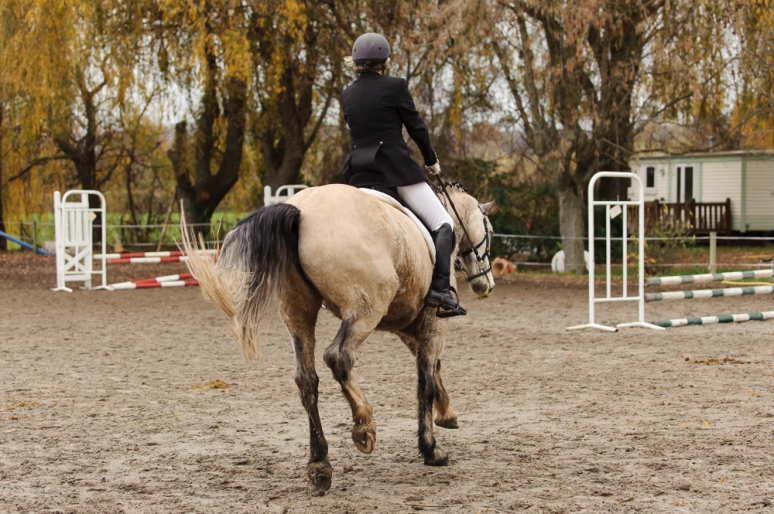 Hmm, I thought, maybe I should leave this melee and wait elsewhere until it’s my turn.  We walked into the adjoining arena (the one with jumps and lots of people) and he completely exploded. 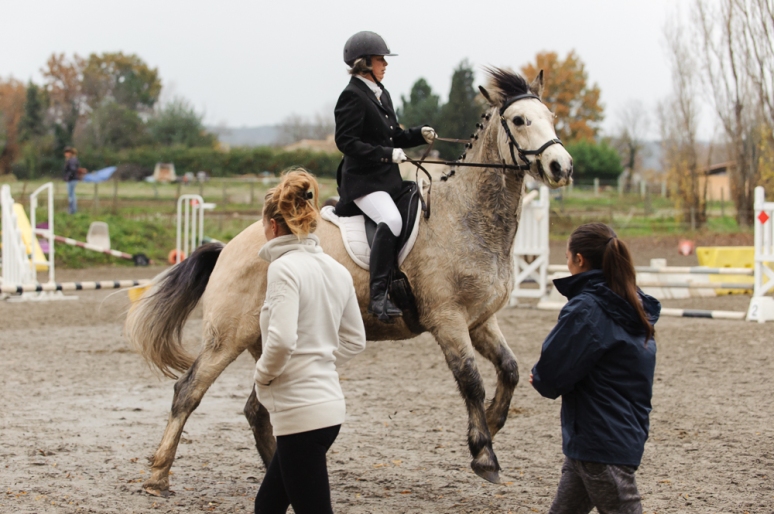 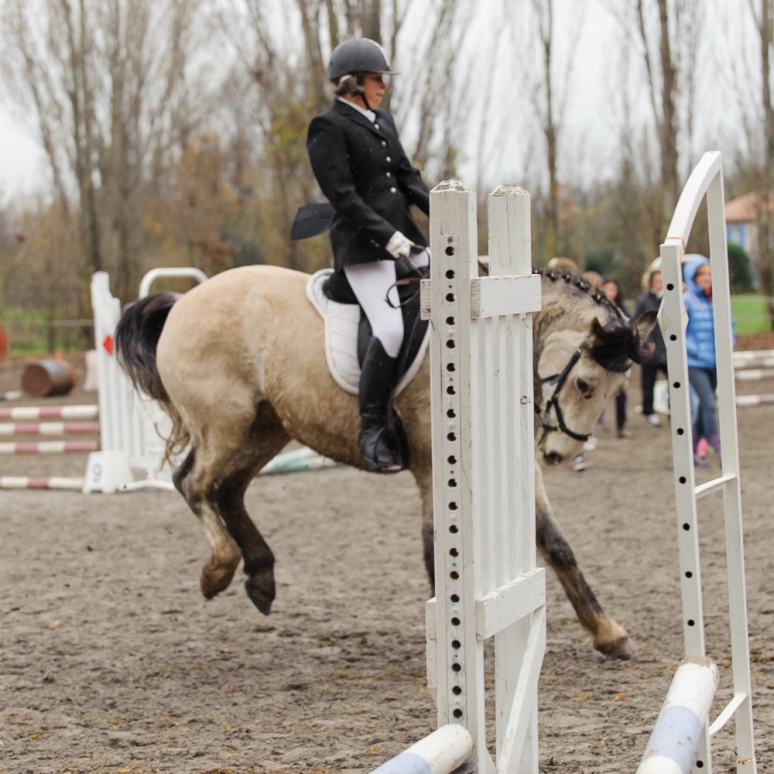 Very high sometimes, but the LSH missed all of those ones.

I was very worried that A) I was going to go SPLAT! on the muddy ground in front of all these people and B) Flurry was going to trample some small people.

Let me be clear here.  Excited Flurry will shake his head, maybe bounce a little and, if he’s feeling particularly naughty, throw his heels in the air as he canters.  He can also take hold of the bit and try to tank off when we’re out in the open, but that hasn’t happened for a long time.

This was none of the above.  This was on-the-spot broncing, followed by rushing sideways and attempting to spin.  It was very clear “Get the Hell off my back” stuff.

I rode him through the first few and regained control.  What the heck?  Were my spurs bothering him?  He’s never reacted to spurs before, but maybe…

With the help of the LSH, I took off the spurs and attempted to ride a circle.  BAM.  Same thing.  Broncing, skittering sideways.  It clearly wasn’t the spurs.

Alexandrine reappeared (Marine and Rusheen had been doing Club 3 GP, so she had been watching them) and tried to coach me through it, but she was as surprised by Flurry’s behaviour as I was.  I speculated that maybe he had pulled something when he was trying to extricate himself from the trailer floor, but we both felt this was unlikely.  Eventually, I decided to dismount, watch a few tests and then mount up again.  If he was still as bad, I would withdraw from my second test.

We stood beside the arena and watched a few riders go – fifteen, maybe twenty minutes.  I loosened Flurry’s girth and found it to be tighter than I would normally have it.  Alexandrine had done it up during my first warm-up.  Was that the problem? Marine and Rusheen went in and did Club 2. They had no mistakes, but he’s a bit tight and inconsistent in his outline – ‘not through’ I think is how you put it.

Flurry seemed calm as I remounted and rode back into the jumping arena, which was now almost clear of course-walkers. Then BAM.  Another explosion.  It clearly wasn’t the girth and it wasn’t the crowds.  Flurry didn’t know where he wanted to go – he wasn’t napping towards the gate or anything like that – he just wanted me off his back.

I rejoined Alexandrine and shook my head.  I definitely would not compete.  A) it’s meant to be fun and B) this was not normal Flurry behaviour at all.  Flurry and I stood beside her and watched one of her other pupils go.  Flurry decided to have a pee and when he had finished, I said I would walk around quietly once or twice and leave it at that.

And BAM, just like that, Normal Flurry was back.

We walked, cautiously at first, then more confidently.  We trotted.  We leg-yielded.  We walked on a completely loose rein.

(It’s a bit worrying that such behaviour was caused by a need to pee.  I had already noticed that he is passing urine more often than normal when we hack out.  These two things together are enough to make me want the vet to seem him this week.)

Needless to say, I changed my mind about Club 2 Grand Prix.  I would compete after all, but I decided not to canter in the warm-up – I was feeling pretty nervous and I didn’t want to risk another explosion, plus the arena was still very busy.  I decided that I didn’t care too much about how the test went, I just wanted to do it and feel that I hadn’t been put off by Flurry’s shenanigans.