The Mud Monster Does Dressage, Part 3

Flurry did a teeny ‘Happy Flurry’ head shake as I asked him to trot.  We reported to the judge, who was set up in an open trailer at C.  Loads of other horses had spooked at this earlier, when I was watching.  Sensible Flurry was definitely back, though, and he just gazed at their set-up serenely as I gave my name and number.

And we were off. 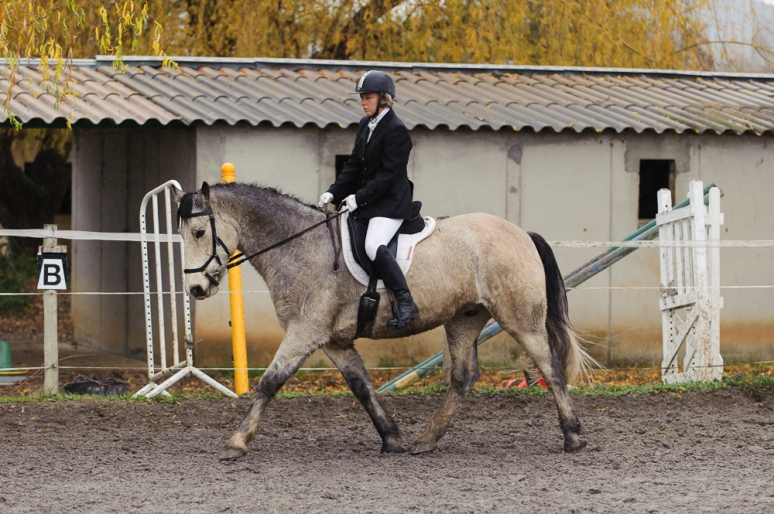 Wobbly centre line on entry – we can do so much better than that!  The trot work was ok – my first circle was way to big, but he was going forward nice and sweetly.  Leg-yielding wasn’t as good as it can be, but then you’re not allowed to carry a whip in French dressage competitions and, if you remember, I had taken off my spurs earlier.  Flurry’s first lengthened trot was almost the best he can do; the second one less so.

His walk was a little stuffy, but straight. Now canter time was coming up. It’s meant to be a walk/canter transition, but I wasn’t too concerned about perfection, I just wanted a canter with no airs above the ground! So our transition was not the sharpest, but he cantered on.  The first part of canter in that test is a counter-canter loop.  Apparently we didn’t quite make it to X, but we did it without breaking and without a flying change.  He broke canter in the corner – the judge couldn’t see us there! HaHa! – but he picked it up immediately when I asked.  Past the judge at C, 15m circle at B, canter across the short diagonal, trot at the centre line (or a little after, in our case), walk at K.  Breathe…

Canter at A and off we went again on a counter-canter loop and at this stage Gloria Gaynor is in my head, singing YES! I WILL SURVIVE!  He was cutting the corners at the judge’s end big-time – not spookily, just reluctant to go into them and reluctant to pass close to the trailer containing the judge. I wasn’t pushing the issue – my legs were feeling just a tad jellyish and, being spurless, I wasn’t sure they would have any effect. 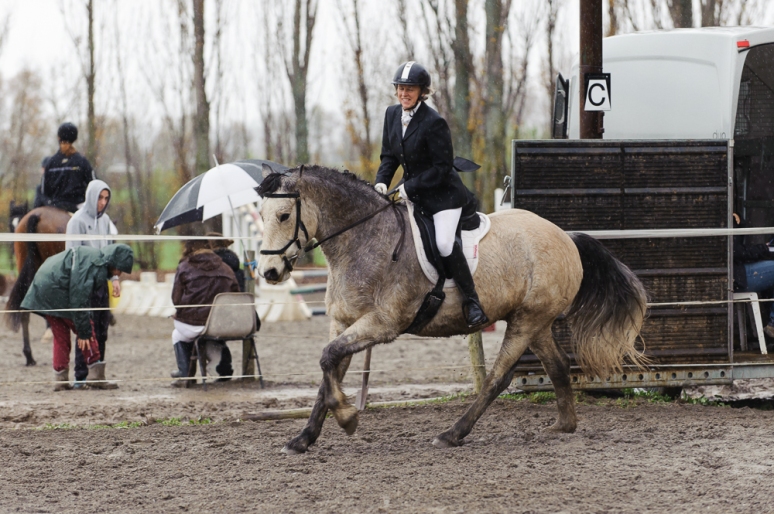 Finally we were turning down the centre line for the last time.  Ride straight, ride forward, I thought, and we powered down the line to halt at I.  Done.

“J’ai survécu!” was the first thing I said to Alexandrine as I left the arena. I think she was pretty happy for me, that I’d gone and done it. Heck, I was happy for me.

It was persistently raining by now and we decided that the best thing to do was for the LSH to take the horses home while Marine, Mathilde and I waited for the prize giving.  Rusheen loaded easily enough for Alexandrine (she has a magic touch), Flurry stomped blithely up the ramp and the LSH took the wheel.  The jeep slipped and slid its way across the field, only to become stuck on the slight incline leading out to the road.  Would we have to unload the horses again?  Hay was deployed under the wheels, and the four of us – Alexandrine, Mathilde, Marine and I – put our shoulders to the back of the trailer and pushed.  Girl Power rules – with wildly spinning wheels, the jeep finally got its nose out onto the road and they were away.

We made our way to the café, where coffee and a croissant awaited me.  We sat; we looked at the photos Mathilde had taken; the girls chatted with their friends; I tuned in and out of their conversation – I’ve learned to let French chitchat wash over me now, I can half listen and pick up phrases and words here and there.  We watched midget ponies and midget kids wing their way around the 60cm jumping course.  Hmm, I thought, if I was jumping, that’s the height I’d like to do, but I’d look a bit odd jumping with that lot.  I’m sure I’m old enough to be the grandmother of some of those kids… After having that thought, I looked around the room.  Yeah.  I was probably the oldest person there, and the oldest rider by a good 25 years.  Where are all the nice middle-aged(+) ladies with their earnest cobs and honest little horses that you see competing in Ireland and the UK? They must be here somewhere… maybe they’re happy just trekking?

Finally, they starting calling out the prizewinners.  I was hopeful that I’d be placed in Club 3 GP and I was – third, and less than 3% off the winner! Really pleased with that one, considering the marks I chucked away with big circles and late transitions! 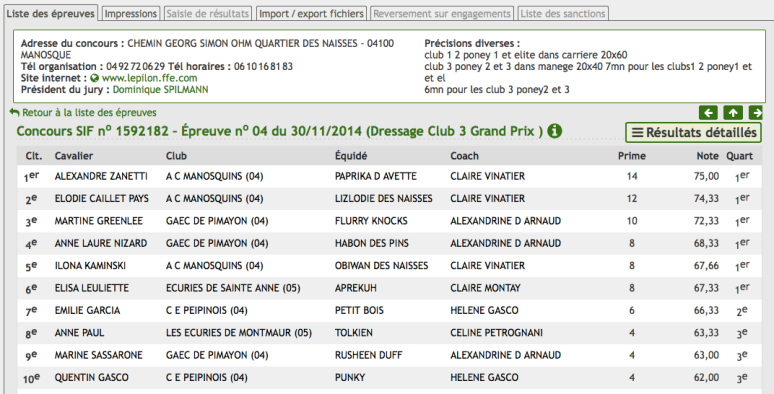 And not too far off the winner, either.

An excellent result, all things considered.